Morning Joe: Democrats Have Forgotten How To Win

Morning Joe: Democrats Have Forgotten How To Win 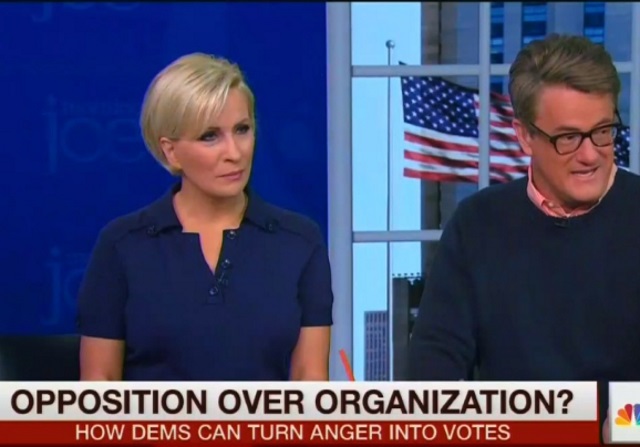 Today’s Morning Joe had some good advice for Democrats if they want to start winning again, particularly at the House level. They need to stop imposing ideological purity tests on their candidates and nominate candidates who resonate culturally in swing districts.

The good news for Republicans is that there is no sign that Dems will heed that wise counsel. To the contrary, Morning Joe was replete with indications that Dems have forgotten how to win, preferring to go down with their liberal guns a-blazing. Excerpts:

Note: Cokie and Steve Roberts have weighed in along similar lines. In this column, they write that the Dems’ insistence on ideological purity in their candidates “is beyond stupid. It’s suicidal.

FRANK BRUNI: Democrats are bad at being relentlessly practical in the way you need to be. And you see this if you look at certain swing districts. This is going to be a big story, I guarantee you, in 2018. And if you look at certain swing districts, they do not nominate the person who’s most likely to win in the general. They nominate someone who’s a purist from the primary and then they end up losing the district. There’s one in upstate New York that’s a great example. They just don’t know how to be as relentlessly practical, and they need to be if they’re going to regain power.

JOE: And I keep hearing, no. No it’s not. No it’s not. Harold [Ford, Jr.], you know very well. I mean, Donna Brazile, I remember very well after 2004, wrote an op-ed in the New York Times, she said, when I go home [to Louisiana], they don’t ask about our economics. They keep asking why we’re for abortion. And again, I’m not just talking about that one issue. But it is a cultural issue. It is the cultural issues that have disconnected Democrats from a lot of Middle America.

JEREMY PETERS: It’s funny. So yesterday I was talking to a young Democrat who was trying to pick my brain about who he should work for. He was looking at the Iowa caucuses in 2020. And I said, honestly, I have no idea. There is no leadership right now. There is such a vacuum. The scleroris in the Democratic party is so overwhelming and crippling that they do not have a bench. They do not have leaders.

I find it strange to be agreeing with not one but two columnists from the NYT but that is how I’m seeing things too.

I also see some on the right being purists too. I see some #NeverTrump people, and I was one, still hanging on to that.

Why? The election is over, he won and not you best hope that you were wrong and the Trump voters were right.

I know that he has all ready quite a few things with which I am happy. Take the win people!

When you sell your soul and go all in for an empty suit because he has the right melanin content of his skin, and then follow that up by going all in for a corrupt witch because she has a vagina, this where you end up.

No, I don’t think they’re on the right track. It’s not about the quest for purity. Hillary wouldn’t pass any such test. She believes in nothing, except that she should be President. And that kills them all from the ideological standpoint; any long-term attempt to develop a solid Democratic field runs into a roadblock—the “inevitable” Clinton. The Dems are as bad as the Liberals in the sense that they’re all about the person, not about ideas; they’re not prepared to argue ideas, but they are prepared to take the very worst person they can find.

Both parties are a mess. The systems are degenerate and weak, ripe for a takeover by strongmen who will fight amongst themselves for the spoils. Cæsar and Pompey redux, perhaps. We can do little more than hope that a malignant specimen like Aaron Burr or Hillary doesn’t come out on top.

I would argue that Hillary *has* core values that she would not be willing to change, and it is best demonstrated by a question:

“Would Hillary be willing to change her core position on X (and really change it, not just posture and backtrack the moment she could) in order to become President?”
Where X=

Reducing government regulations and taxes on small businesses – No

Adding work requirements to Welfare – No

You bring up a good point – Hillary effectively cannot change her position on anything, because no one would believe anything she would say given her long history. So she’s locked in to a place where her words really don’t mean anything to anyone anymore.

Now, Trump is another person whose words aren’t to be taken literally, BUT he has the advantage of now holding power, so all have the option of simply watching what he does, not what he says. And in the terms of foreign relations, important players like China are starting to sit up and take notice of what he actually does.

It’s an ironic situation – Hillary can’t change positions anymore BECAUSE of all the things she has said in the past, but Trump CAN take almost any position now, precisely because people now believe he’s capable of going in any direction.

Trump has very clear positions, but he is a negotiator. With Trump, the best is not the enemy of the good, or even the enemy of better than what we have.

My prediction for the Georgia house race tomorrow – the Dem Ossoss will take 45%, and no Republican will get out of the 20’s. The media will trumpet this as a “Great Win!!!” for the Dems, and “Proof!!!” that “The Resistance is Real!!!”

In a month or so, when the runoff is held, the Republican (whoever that is) will take 55%, and Ossoff will get his same 45%. And we will never hear a word about this race from the media again.

Not long ago, the Rs were in the same situation. The Rs had to get more people “under the tent”. With the tea party concept going strong, a few individuals were nominated for some major positions, but they were just the wrong people. They initially looked & sounded good, but under some light, they failed – Akin in MO and the weird lady out east (Christine).

I looked at my local elections and saw candidates that started small, but never finished an elected job. The only thing you knew them for was always running for the next job.

So, I look for solid candidates at all levels of government, which is why the Rs have a good and young bench across many positions and in many states. But, we do have to work at getting the old guys out.

However, until all states run closed primaries, the Rs will be subject to Ds crossing over to vote for the worst candidate. Yes, they still can re-register, but that takes a bit more effort.

I don’t think this quite gets to the heart of the problem. Liberals have no choice but to insist on purity because they are unwilling or unable to even discuss the possibility of anything else.

They haven’t chosen a strategy. They just screech their insults and demand power and when that doesn’t work, they just do it some more. It’s all they know.

They show their true colors with the Soros backed antifa attacking people.

Not surprising that you’d forget how to win when you been cheating for so long.

More like the dems have moved so far into the communist side of politics no one likes or trusts them.
I have no problem with them losing and hope it becomes many decades long pattern for them.

The Democrats at the national level still do not want to clean house. The voters are going to have to do it for them.