The bomb killed terrorists and destroyed their tunnels and ammunition caches. 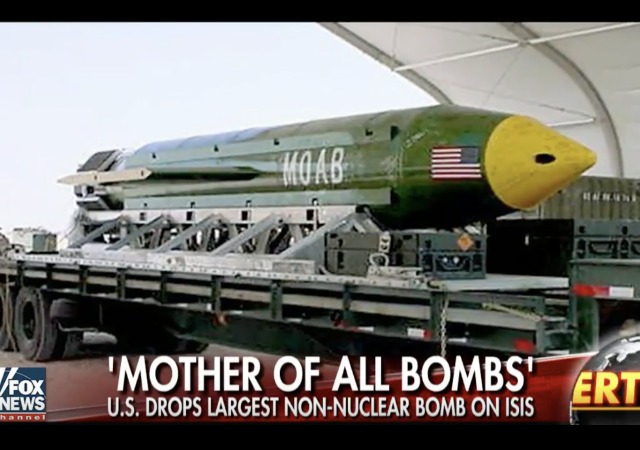 Yesterday, the military dropped a MOAB bomb on an ISIS tunnel in Afghanistan. The left freaked out over possible civilian death and injuries. (Weird, I remember their silence when Obama dropped 26,000 bombs last year alone) But Afghan officials said that the bomb did not kill any civilians. From ABC News:

Thirty-six ISIS militants were killed but no civilians died when the U.S. military dropped the “mother of all bombs” on a cave complex in eastern Afghanistan on Thursday, according to the Afghan Ministry of Defense.

The 22,000-pound bomb was used for the first time in combat on Thursday, when it was deployed from an MC-130 aircraft targeting the Achin district near the Pakistan border.

One member of an anti-ISIS group told the BBC that “all civilians had left the area since the start of the anti-IS operation.” That operation began 13 days ago with Afghan special forces “with the help of American air support.”

Chief Executive of Afghanistan Abdullah Abdullah confirmed that the attack had been carried out in co-ordination with the government and that “great care had been taken to avoid civilian harm”.

In a press briefing on Friday, Gen John Nicholson, commander of US forces in Afghanistan, said: “We have US forces at the site and we see no evidence of civilian casualties nor have there been reports.”

The Afghan defence ministry said the bomb struck a village area in the Momand valley where IS fighters were using a 300m-long network of caves.

Do you realize the impact of MOAB?

You're the idiot if you think an 11 ton bomb just destroyed "ISIS tunnels" but didn't hurt civilians. https://t.co/JIiPTFSI31

The #MOAB explosion is equivalent to 11 tons of TNT and the blast radius is a mile wide. How many innocent children were in that mile?

US drops 2100 tonne "mother of all bombs" on Afghanistan. How many innocent civilians will be "collateral damage"? How many lil kids killed?

Obama acknowledged the “legitimate criticism” in the past that the legal framework governing drones has had shortcomings.

“It wasn’t as precise as it should have been, and there’s no doubt civilians were killed that shouldn’t have been,” he said at a news conference at the conclusion of a nuclear security summit in Washington. “We have to take responsibility where we’re not acting appropriately, or just made mistakes.”

“We have to take responsibility where we’re not acting appropriately, or just made mistakes.”

Wow! Now there is need of 2,592 virgins. Virgins must be getting very expense due to their scarcity. I’m not a broker, but if you are in the virgin market it’s looks like a good time to hold as their value can only increase over the next eight years.

I don’t believe that has been clarified by the religion of peace.

“In classical Arabic, Hur’in is made of two words Hur and In. The former word literally means “most beautiful eye” irrespective of the person’s gender, while the latter word means “companion.” Thus, the English rendering of the compound word Hur’In is “Pure companions with most beautiful eyes.”” Etymology of the word Houris.

I imagine they can select when they get there. Think boy brides of Afghanistan.

Just as a point of reference, the detonation of the MOAB in all likelihood vaporized everything and every living human within a calculated diameter of approximately two miles or more. I doubt that the bodies were recognizable enough to count, right?

Count pieces and divide by 243.

The high temperature blast radius is between 130 and 450 yards from the point of detonation. This is the area where bodies would be disintegrated or too badly destroyed to be readily identifiable. Beyond that, the critical overpressure wave will kill out to approximately one mile [1760 yards]. In this area, people will be killed, but their bodies shuld still be readily identifiable as being human and capable of being physically identified. However, do to the airborne nature of the explosion, the MOAB is largely effective only on surface facilities and targets. Cave and tunnel systems require the overpressure to be funneled down the the tunnel from the surface entrance. There are many methods of limiting the distance the wave will travel, which reduces its effectiveness.

There is no way to effectively gauge the cost of using any weapon, if the use of that weapon inflicts harm on the enemy and saves the lives of friendly personnel. Using the MOAB in this instance is acceptable. Whether it was necessary can not be reliably estimated. However, virtually everyone agrees that it was used as much, or more, for psychological value as for practical value.

“…However, do to the airborne nature of the explosion, the MOAB is largely effective only on surface facilities and targets. Cave and tunnel systems require the overpressure to be funneled down the the tunnel from the surface entrance.”

That’s going to depend on the terrain. The fact that it was used in mountainous terrain, hemmed in by the valleys, would have amplified its effectiveness. The blast could have only so many ways to go. If it can’t go out, that leaves only up and down.

I may seem like I’m contradicting myself here, but I’m actually not. Fat Man was more powerful than Little Boy. But fewer people died at Nagasaki than HIroshima. Hiroshima sits on a river delta. Nagasaki in a valley. The ridgelines shielded a great many people who would have died otherwise. But the ridgelines would have also tended to concentrate the blast.

So the MOAB wouldn’t be very effective against underground facilities on flat terrain, only wide area targets where the blast radius really will extend out to a mile, but things change in the mountains.

Do these weapons have an expiration date or does their effectiveness degrade over time?

It’s not about body count. Yet. If this bomb gutted the caves and wiped out the underground facilities as reported, it will force the terrorists to scatter. If they similar facilities elsewhere, they don’t feel safe today and are probably scattering. It will be much more difficult and riskier for them to congregate, accumulate and assemble from now on.

And then there is the bigger consideration: we can drop these and many other kinds of bombs and missiles anywhere we want. And we have an administration that is willing to do so. This is soon going to be about Iran and they actually have nukes ready to deliver. Hence our own nuke test yesterday to demonstrate to them that they can’t win.

China has to make a decision on NorKo very soon because NorKo is not Iran. They are mostly China’s problem. If we have to fix it, they will be left with a bigger problem. It really falls on China to take out Un once and for all. Their world will start unraveling fast (one China e.g.) if they get bogged down trying to stabilize a chaotic NorKo, especially if they can’t be stopped from attacking SoKo and/or Japan.

We have more important issues to address at this time.

Afshan Latheef: US drops 2100 tonne “mother of all bombs” on Afghanistan. How many innocent civilians will be “collateral damage”? How many lil kids killed?

Maybe I’m being too hard on him, but he is off by, oh, two orders of magnitude.

Reading skills and math are both so hard.

per its twitter….explains a lot

Maybe a nuclear demo is in the cards soon so he can make a real comparison. Being “bombed” versus being “nuked” is beyond his or most peoples appreciation.

I was wondering if there was a smaller version for fishing.

Josh, with his sudden care about innocent children (has anyone ever seen a non-innocent child?), needs to visit a Planned Parenthood parts production factory.

Heck, the progs were silent when Obama droned a US citizen to death without due process.

I’m waiting for Cindy Sheehan to pop up again outside the Mar a Lago gate.

I’m very pleased by the result, but how do we know with certainty that we waxed 36 of ’em?

Four left handed and thirty two righties. That came from the managers clipboard at the big game.

Nearly all terrorists are civilians.

The ones who aren’t civilians are soldiers (or the equivalent in some other military service).

As an old geology student, I have a quibble: if it is man-made it is a tunnel; caves are made by natural forces, primarily water.

Your quibble is well taken. The answer is both. These complexes are made up a mix of natural caves and connecting tunnels. I think this is too much for a journo school grad to grasp so expect inaccurate reporting.

The large disproportion between the target and the weapon suggests desperation on the part of Gen. Nicholson. Just how badly are we losing?

Two things. One, the death count in now up to 96 critters. Two, The overpressure in the caves was supposed to kill almost anything in them and the way the bomb air burst above the ground would propel the shock wave into any opening that was in the area. It may not destroy the caves themselves but I’ll bet they will no longer be thought of as a “Safe havens”.