“Our solution to pollution is the people’s revolution” 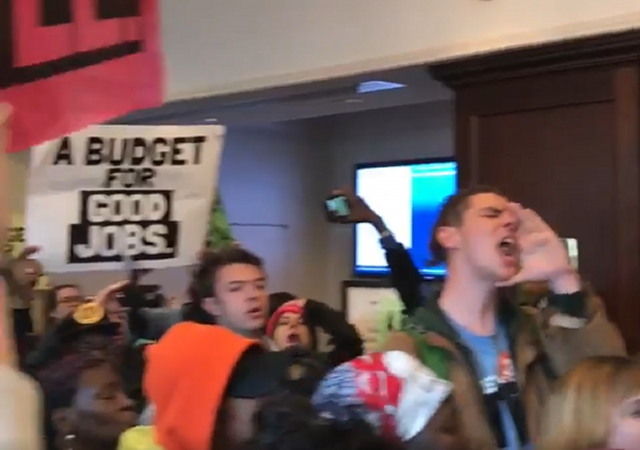 Protesters carried signs that said they want a “budget for the people” and they clearly targeted Heritage for the trust President Trump has placed in the organization.

Barack Obama broke his silence yesterday to speak about the importance of civic engagement. The former president talked about things like “listening to understand” and working “to create trust.” Altogether it was a good primer on the importance of polite political activism.

The mob that just muscled their way into the lobby of the Heritage Foundation must have missed Obama’s lecture. When those partisans pushed past security onto private property, they signaled that the liberal resistance has given up on unity. Quite simply, division is the new goal…

Around 200 protestors flooded into Heritage’s Capitol Hill headquarters an hour before noon Tuesday, screaming that they were going to shut down the think tank. While opposition to Trump’s budget was the headline of the demonstration, they didn’t let that stifle their creativity. “Our solution to pollution is the people’s revolution,” they chanted before switching over to the more succinct, but no less vague, cadence of “water not walls.”

Regardless of the mixed messaging, the bottom line was simple. They swarmed into Heritage because they didn’t like the ideas the think tank produced. And instead of trying to help reach consensus with traditional protest, they tried intimidating the opposition.

Here are a couple of videos from the scene:

We're not afraid to demand what we deserve. We need a #Budget4ThePeople #RiseUp2017 pic.twitter.com/LDmQDtIUkk

This short video shows the size of the crowd outside the building:

Heritage employees in the office above held their own signs in the windows:

Bre Payton of The Federalist has more on the events leading up to the protest:

In an interview with The Daily Signal, Phillip Stuckey, a reporter for The Daily Caller News Foundation, talked about the time he spent with the protestors — traveling with them on the bus to the Heritage Foundation.

“We’re going to be bussing you to an undisclosed location,” organizers said.

The captain of the bus told protestors that President Trump wasn’t smart enough to come up with his own budget, so people at Heritage wrote one for him. If protestors had any issues with Trump’s budget proposals, they should take it up with Heritage, an organizer said, according to Stuckey.

This explanation is a reference to the Heritage Foundation’s budget blueprint, which they release every year.

Stuckey asked a bus driver whether he was being paid to drive protestors from the White House to the Heritage Foundation. The driver responded that he doesn’t “do nothing for free.” When Stuckey asked who was paying him, several event leaders, who called themselves “marshals,” told him to stop asking questions and tried to bar him from streaming the protest on Facebook Live.

All protestors were barred from tweeting, texting, or Facebook Live-ing their location until after the day of protest was over.

“‘If you’re approached by a member of the media, don’t say anything,’” organizers told protestors, according to Stuckey.

This is all the left has to offer now. An endless cycle of protests and demands. There are no policy proposals or coherent arguments in favor of voting for Democrats, just outrage.

We're shutting it down at @Heritage because it continues to be @realDonaldTrump's think tank. #RiseUp2017 #Budget4ThePeople pic.twitter.com/bnerOnBBa0

It’s been said many times, but it bears repeating. This is why Trump won.

“The mob that just muscled their way into the lobby of the Heritage Foundation”.

Does the left operate in any other way???

So was anyone arrested and charged with trespassing? Were the Capitol Police ordered to stand down to allow the leftists to intimidate the Heritage Foundation? Imagine the story if a bunch of peaceful Trump supporters held a sit-in at Planned Parenthood’s offices.

Obama ‘broke his silence yesterday to speak about the importance of civic engagement. The former president talked about things like ‘listening to understand’ and working ‘to create trust.”‘

It’s all part of Obama’s plan, divide and conquer. Speaking of Obama, here are a few things I trust more than him; a fart when I have the flu, Mexican tap water, gas station hot dogs and a cocktail with Bill Cosby.

Our entire system of government (local, state, federal) has been infiltrated by Communists. The “45 Goals of Communism” laid out the plan in the late 1950s. Normal people stood by while caving-in to every demand of the loony left. Now we are in a giant mess that will only be resolved with violence.

Why did any of them leave under their own power?

‘We are going to be bussing you to an undisclosed location’
So they didn’t know where they were going, which means they didn’t organize the ‘protest’ themselves, and didn’t even know exactly what they were ‘protesting’. Anyone else catch that?
Don’t talk to reporters or post on Facebook, why? So people don’t realize they are not protester’s but paid agitators who don’t even know why they’re there? Here’s an idea, track these paid screamers down, pay them more than their liberal masters do and get the real story. These people don’t believe in anything but the almighty dollar, something they share in common with their liberal masters.

The Daily Signal reporter Phillip Stuckey managed to get mistaken for a protester and onto the bus, and posted the video he shot (before they twigged to him and kicked him out of the protest)

It’s a wonderful peek into the world of Leftist staged paid political protesting. I couldn’t find a direct link to the video, but it’s on their facebook page under “Videos” (look for the chubby guy with the beard)

So how many were arrested for trespassing? Will charges be filed? Will they join the mass of savage thugs from Middlebury college who’ve been arrested and will be expelled?

It’s sad that nothing ever happens to the far left, nothing…

“We are going to be bussing you to an undisclosed location.”

During the last 100 years, that has not ended well for a lot of people.

“The picks and shovels in the bus? They’re for gardening at our destination.”