Lawmaker Gets Internet Troll in Trouble…by Calling His Grandmother

Lawmaker Gets Internet Troll in Trouble…by Calling His Grandmother 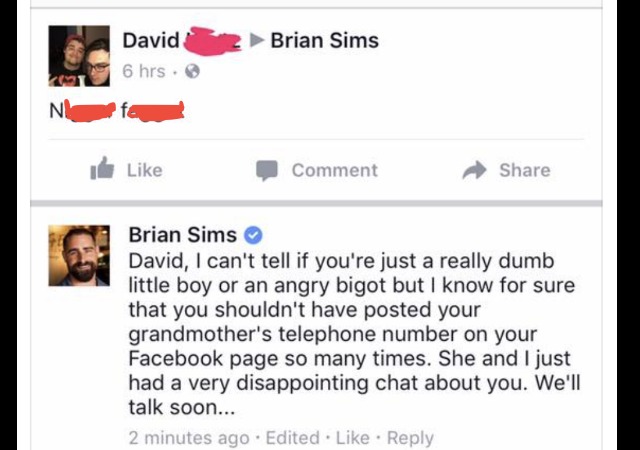 An internet troll called openly gay Pennsylvania state lawmaker Brian Sims a few demeaning names on Facebook. So Sims clicked on the troll’s page and saw he posted his grandmother’s phone number a few times. From The Huffington Post:

“What caught me about it was there wasn’t a reference to something I said or something I’d done or some policy,” Sims told HuffPost. “And when I looked at his page there was very little there ― but he’d posted a telephone number a number of times.”

So Sims decided to call the number at 6:15 a.m. ― and the person on the receiving end turned out to be none other than the troll’s grandmother.

”I explained to her exactly who I as and what he had done,” Sims told HuffPost. “Like any grandma she was very embarrassed at having this kind of convo and very ashamed at the actions of her grandson. The conversation ended with me telling her that I wanted to hear from him.”

Unfortunately, the conversation did not help:

“It is the ultimate calling card of a coward to ― under the guise of night and behind a keyboard ― use the kind of language that in person would cause most decent people to respond in anger and frustration,” Sims continued. “The reason people do things like this is they don’t have the courage, the education or gumption to do this kind of thing in person.”

Let this be a lesson to trolls everywhere: be careful what you’re posting ― it might just result in an early morning call to your grandmother!

I read it a bit differently. Per the HP article, Sims has a morning routine of checking the news and deleting troll stuff from his Facebook page. Then, he probably goes into to work, etc. We all have morning routines, mine usually starts with coffee and reading.

The troll had a phone number on his page and I think Sims was surprised that he was talking to the grandmother and not the troll. So, the troll was the jerk – who would post phone numbers on a public social media page.

BTW, “Sims did in fact end up talking to the poster after the conversation with his grandmother. He said that he’d rather not discuss the specifics of their conversation but noted that it “didn’t resolve anything.”.”