In 2017, Americans Spending More on Taxes Than Food, Clothing, and Housing Combined

In 2017, Americans Spending More on Taxes Than Food, Clothing, and Housing Combined 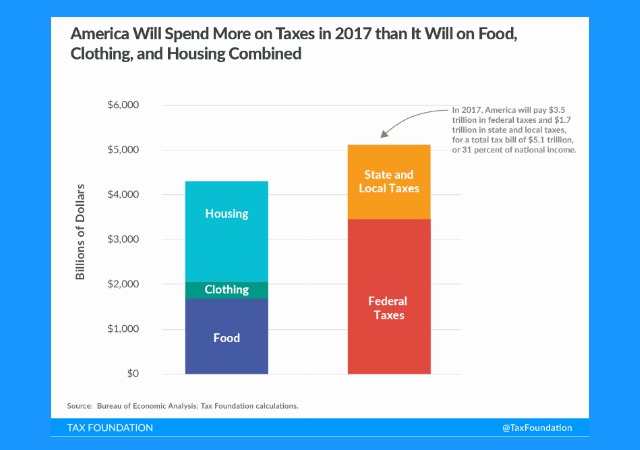 April 23rd of this year was Tax Freedom Day, or “the day when the nation as a whole has earned enough money to pay its total tax bill for the year”.

A whopping 31% of the nation’s earnings are confiscated by the government for federal and state taxes for a total of $5.1 trillion. Amazingly, that’s still not enough to pay off state and national deficits. 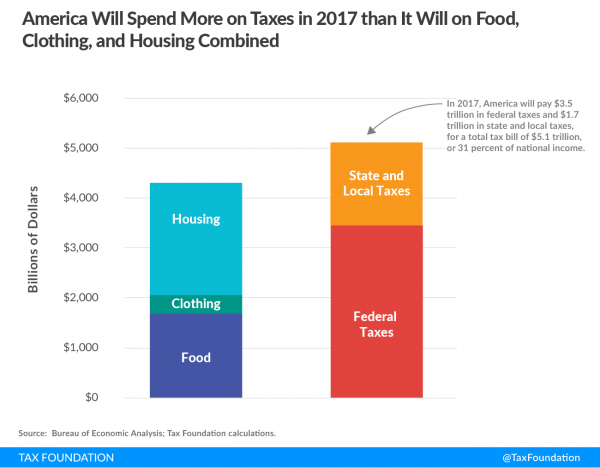 Tax Freedom Day® is the day when the nation as a whole has earned enough money to pay its total tax bill for the year. Tax Freedom Day takes all federal, state, and local taxes—individual as well as payroll, sales and excise, corporate and property taxes—and divides them by the nation’s income. In 2017, Americans will pay $3.5 trillion in federal taxes and $1.6 trillion in state and local taxes, for a total tax bill of $5.1 trillion, or 31 percent of national income. This year, Tax Freedom Day falls on April 23, 113 days into the year.

Since 2002, federal expenses have surpassed federal revenues, with the budget deficit exceeding $1 trillion annually from 2009 to 2012. In calendar year 2017, the deficit is expected to shrink slightly, from $657 billion to $612 billion. If we include this annual federal borrowing, which represents future taxes owed, Tax Freedom Day would occur on May 7, 14 days later. The latest ever deficit-inclusive Tax Freedom Day occurred during World War II, on May 25, 1945.

Even more aggravating is how much more Americans are paying in taxes now than in 1900. And what exactly are we getting in return? 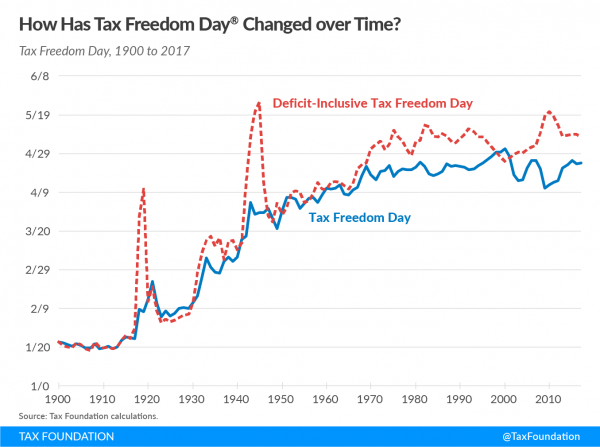 President Trump is expected to announce his plans for tax reform as early as this week. Let’s hope the cuts are as big as he’s promising.

Technically that is inaccurate: we are paying for other people’s food, clothing, and housing (and cell phones and cable TV).

You are so right. We are supporting legions of lazy mooches and a whole bunch of third world trash that wouldn’t work in a pie factory.

Start tax reform by getting rid of the damn Obamacare mandate.

Disgusting. Would anyone “invest” money in anything else if it was wasted this quickly?

Being self-employed, I pay double the social security and medicare amounts, plus I pay for my employees too.

My tax freedom day is sometime in June.

But Obama thinks we don’t create jobs or do anything else.

if they would ever let President trump get going,…

But Obama thinks we don’t create jobs or do anything else.

“You didn’t build that,” you know.

Obama’s entire economic plan was a gigantic “[email protected]#$ YOU” to producers, employers, entrepreneurs, and small business owners. Any time he had the chance to make it harder for you, he did.

I can only conclude that he wanted the economy to fail. Really, that’s the only explanation that holds up to logical scrutiny.