And it looks as terrible as you’d imagine 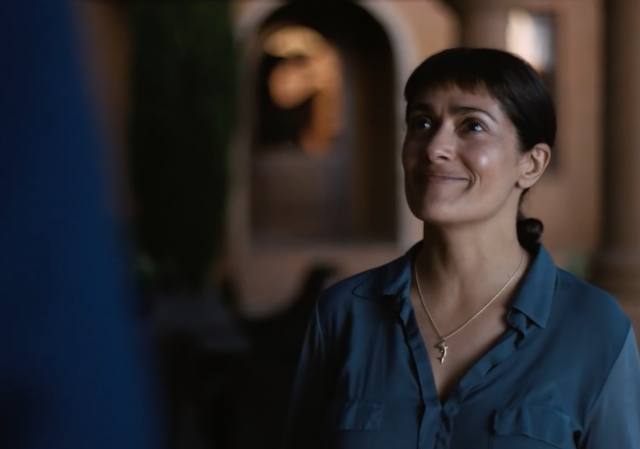 Salma Hayek and John Lithgow teamed up for the upcoming Beatriz at Dinner. Billed as a dark comedy, the preview looks more like a parody found on Saturday Night Live than an actual movie meant to be taken somewhat seriously.

The plotline of the dramatic comedy has been described thusly:

Beatriz (Salma Hayek), an immigrant from a poor town in Mexico, has drawn on her innate kindness to build a career as a health practitioner in Los Angeles. Doug Strutt (John Lithgow) is a cutthroat, self-satisfied billionaire. When these two opposites meet at a dinner party, their worlds collide and neither will ever be the same.

In the official trailer, Lithgow’s character (who owns hotels) first meets Hayek at a dinner party where mistaking her for the help, he asks her for another bourbon. During the dinner toast, Lithgow interrupts Hayek to ask her if she came to the U.S. legally. Later, Lithgow boldly proclaims what America really needs is more jobs, drawing a direct parallel to Trump’s campaign messaging. Several cuts praise Hayek’s character, calling her a “saint.”

If that’s not ridiculous enough for you, there’s more! Bragging about shooting a rhino, Lithgow passes around his phone, on which is pulled up a photo of himself behind his dead trophy. Hayek throws the phone at him saying, “you think it’s funny?! I think it’s sick!” as she storms off.

The official trailer, if you dare. WARNING: You will not get the 2:29 minutes of your life back if you proceed.

During an interview hyping the film, Hayek referenced the women’s march saying she hoped Trump saw the march for what it was (whatever that means) and concluded by saying “we’re America too”. In other interviews, Hayek said Beatriz at Dinner was meant to highlight two very different perspectives and the difficulty the country currently has speaking to one another, a remarkably fair and accurate point.

Outrage is en vogue and listening and consensus building are traitorous, all to the detriment of a productive, just, society. But I digress…

If the trailer is any indication of the film as a whole, it’s perfectly illustrative of the Hollywood bubble and their perception of somewhat right-leaning Americans. The evil, white businessman, ignorant to the ways of the little people, feelings, and everything else humane, must be taught a lesson via public humiliation so as to correct his wrong thinking.

I’m sick of Salma Hayek. She’s made a boat load of money here.

Is there an ounce of gratitude in her, anywhere?

I’m not watching many movies anymore….

But it DID change. A LOT.

In the Hollywood I knew as a kid, there were real gentleMEN, and ladies. Yeah, there was Errol Flynn and various loose women. But there were actual, factual patriots who had good marriages and stable families, and hated Collectivism in all its guises. They had…and lived…hard values and principles. Many of them…who did not have to…served in uniform in WWII.

Predictions: Massive loss at the box office. Oscar nomination, which it loses to something even more dumb.

Sorry, George for the down arrow. This site has them too close together and I didn’t mean it trying to hit reply. I agree with you that it will be a yuuge money loser but Hollywood doesn’t really seem to care about money from the public anymore. They will get their money from the rich Hollywood moguls and they, of course, are all liberals who will declare their loss as a tax scheme. About half of those moguls/liberals are celebrating with the obama’s on Gefen’s big yacht as I write. I have so many no-see-ums, a$$hole actors, now that it’s hard to find a movie I can attend.

Hollywood is the reason I have changed my mind on watching movies for free on Kodi……let the bastards starve!

Hollywood once again shows it doesn’t care how much money it loses just as long as it can piss on America. But I’m sure it will make up the shortfall at the US box office in foreign markets. I’m mean, can’t you see this storyline drawing Chinese into theaters in droves (sarc).

Besides losing lots of money I predict after this movie flops we will no longer be calling the GBU-43/B the Mother of all Bombs. There’ll be a new title holder.

It may do well overseas.

To Point:
Hollywood is doing ever so well overseas. Hollywood exists for the fact the money infusions are coming from China with buy-ins of $44.1 Billion with AMC, $3.5 Billion to Legendary Entertainment, $7.2 Billion Investment funding to Paramont and commitment investments to Studio 8, Lionsgate, STX to name a few. Many of the commitment funds are based on agreements to shoot parts of the films on locations in China and released in both English and Chinese dialects.

I’m sure all those progressive liberals collecting their paychecks from Hollywood and New York City while standing on their soapbox supporting “their shared values” with the rest of America have justified to themselves why it is acceptable to work for and in a country which is documented for habitual Human and Civil Rights violations by Humans Rights Watch.

They’re called entertainment in the same way one might refer to a highly paid whore.

I assume that in the sequel it will be revealed that Lithgow is secretly gay, and Hayek will convince him to come out, thereby relieving all of his inner angst which had driven him to shoot that poor rhino.

Every character Lithgow plays is gay, secretly or not.

“Hayek said Beatriz at Dinner was meant to highlight two very different perspectives and the difficulty the country currently has speaking to one another, a remarkably fair and accurate point.”
_______________________

How does it address “the difficulty the country currently has speaking to one another” about this subject, when it offers up ludicrous stereotypes (the hard-working, noble Third-World illegal alien saint vs. the evil, selfish, xenophobic, materialistic white American citizen)?

If the filmmakers really wanted to address the subject honestly, they would have addressed the real issues (e.g., the crimes illegal aliens commit, the enormous drain on taxpayer-funded services, the increased competition for low-skill jobs that keeps wages depressed for lower-paid workers, the erosion of the public’s respect for the rule of law when they see one group of people routinely being allowed to break multiple laws with impunity, etc.).

Of course, telling the truth is much more difficult and provides much less opportunity for moral preening and virtue signaling than just going with the left’s favorite meme, so it’s no surprise that they did it this way.

I thought the same thing about the two stereotypes. The poor Mexican hard working discriminated against vs the obnoxious filthy rich bigoted white male. What a starting point for both roles huh? Where does the poor Mexican character go from her exalted spot of purity and where does the bigoted white male go from his? The only way out for me is if the rich white guy calls ICE and turns her in!

My own state GOP rep insulted me, called me racist, when I tried to talk about how many are in our schools….

Maybe if some RINOs were shot in D.C., conservatives could actually make headway against the liberal beasts. Getting rid of rhinos, however – not so much.

Actually this is progress. Usually in Hollywood the only three roles available to a straight white male are serial killer, evil corporate executive, or domestic right wing terrorist, .

Hollywood used to like the RINOs. They’d cross the aisle to pass liberal legislation.

…the ways of the little people, feelings, and everything else humane …

And they figured they had to throw in a Mexican character for that, huh?

Scriptwriters really have to get out more.

I really should have listened to that warning about not getting 2:29 minutes back in my life.

The wealthy, blundering, insensitive white guy mistakes a person of color (I’m not sure if Hayek is one, or is just playing one) for the help? What will they think of next!?

I can’t tell you how many times over the years as an airline captain that people tried to get me to carry their luggage to their room! And I never took one tip!

I’m not surprised you got no tips, with that kind of attitude! 😉
Status as chauffeur OK, but status as bellboy was too low? 😛

It’s only offensive to POC, because racism.

“WARNING: You will not get the 2:29 minutes of your life back if you proceed.”

I can’t wait to ignore this movie when it comes to Netflix.

Typical of yet another Liberal-infiltrated institution.

Since when are Mexicans against cruelty to animals? Many of them love hunting, fishing, dog fighting, cockfighting, and, though it’s not as popular as in Spain, bullfighting.

I suppose you could say Beatriz is a character, and not simply a type, but all the others in the clip, except for Lithgow, seem to be stereotypical nice-but-condescending white (liberals?) who aren’t quite woke (yet!). Anyway, Beatriz seems to be a caricature of an old hippie with the added dignity of her downtrodden-but-still-proud Mexican heritage.

Hollywood likes to get up on a soapbox and lecture to the unwashed masses. SNL is the same with this lecture mentality. I’m sick of it. It isn’t funny and it makes me tune them out.

During the Bush years we were treated to an endless stream of unsubtle leftist messaging slipped into *everything* the entertainment industry did. Now that Trump’s in office they’re going to double down. It bored me then, and it bores me now, and I suspect most people feel the same way.

notamemberofanyorganizedpolicital in reply to Evil Otto. | April 19, 2017 at 5:05 pm

Psst……. Don’t tell Hollyweird and the Nutworks, but nobody is watching them……..