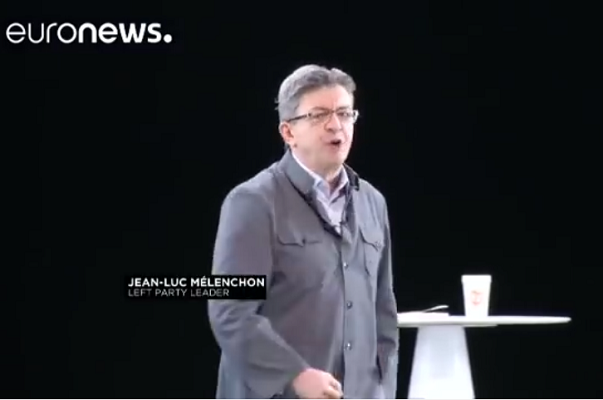 Labelled a “surging dark horse” candidate in France’s presidential election, communist Jean-Luc Mélenchon has a new proposal that he hopes will maintain his momentum:  a 100% tax on the rich.  Mélenchon is running as the candidate of the “Unbowed France political movement, in an alliance with the French Communist Party.”

Mélenchon is a colorful character whose repertoire includes showing up at rallies via hologram, enabling him to “appear” at seven rallies at once.

In the latest plot twist in France’s highly contentious presidential election, Mélenchon — an outspoken 65-year-old leftist who often appears on the campaign trail via hologram and who has pitched his proposal to nationalize France’s biggest banks and renegotiate its relationship with the European Union via free Internet games and YouTube videos — is now soaring in the polls.

. . . . He has more YouTube followers than all of his principal opponents combined, and he released an online video game titled “Fiscal Kombat,” in which players attack bankers and, at a higher level, Christine Lagarde, the French director of the International Monetary Fund, in the name of redistributing wealth to the masses. The game is a remake of “Mortal Kombat,” a 1990s video game familiar to many of his supporters.

If these proposals weren’t radical enough, Mélenchon has upped the ante and is proposing a scheme to cap the income level in France at €400,000.

France already has some of the world’s highest rates of income tax, and previous attempts to push them even higher have failed.

President Francois Hollande proposed a 75% top tax rate in 2012, but the proposal was rejected by the French courts.

One of the many problems with France’s war on high earners is that they tend to leave the country when the tax burden becomes too high . . . and they take their millions with them.

Around 10,000 millionaires left the country in 2015, followed by 12,000 last year, according to New World Wealth. Movie star Gerard Depardieu is among those who have ditched France over the issue.

“I believe that there is a limit to the accumulation [of wealth],” Melenchon said in March. “If there are any who want to go abroad, well, goodbye!”

Goodbye, indeed.  Australia, the United States, and a host of other countries are rolling out the welcome mat for France’s millionaires.

It’s a crazy proposal and will only result in more wealthy French citizens jetting off for more tax-friendly places. That said, the headline is a bit misleading because it comes across as a 100% tax on all income, not just the income above 400,000 Euros.

Death and taxes…. guillotine in the 18th century and taxes in the 21st…. obviously the Republic wants to destroy its upper crust again… Liberty, Equality, Fraternity, Poverty.

One benefit of having France to observe is that it shows the left and us too, that when you take socialists ideas to their extreme you have a living breathing disaster. The leaders in France have used higher taxes and strict non-work rules to keep everyone happy and it hasn’t worked. The rich will leave as they do here in the US when states start overtaxing them. AS many bad things as capitalism has, it still beats all of the other systems hands down.

As if having Venezuela as a real-time example of socialism’s failures isn’t good enough.

The French have trouble because they don’t have the right people in charge!

When a person declares he intends to commit bank robbery, he is immediately reported to and arrested by the police.

When the same person declares he intends to commit bank robbery—as a Communist, he gets a spot on a ballot.

These unrepentant SOBs belong in the same trash bins as the Nazis and ISI. All should be hunted down and tired for crimes against humanity. Not running for office.

The bank’s product is money. It may surprise you, but some people would not classify it as theft, but rather as marketing. A service to the bank. Similar to people who steal software, music, etc. then redistribute them. The only difference is that bank robbery, car theft, and home invasions are high profile acts that overtly increase risk to the would-be marketeers… unless the majority, real or manufactured, vote for it.

They convince people that they are victims. It must be an easy sell.

I agree, and we should do the same in the US. The definition of rich should be, anybody whose annual income is at least one cent more than mine.

And when if capping the income of France’s producers and employers evil capitalists fails to revive the nation’s economy, we’ll happily make it 200%.

You must be cross-eyed. 🙂

They do have a large muslim population to feed.

He’s only surging because the media lies about polls. France doesn’t want another socialist.

He must be losing to put out such an extreme proposal which will almost certainly erode his support even more. Now he makes himself a joke.

This is Leftist Nirvana! Everyone sends all earnings to the Government, the rulers will then return to you what they figure you need.

“…Mélenchon is a colorful character whose repertoire includes showing up at rallies via hologram, enabling him to “appear” at seven rallies at once.”

Stupid? You can’t hang a hologram.

Do you know who else made essentially the same proposal, about 220 years ago? Thomas Paine. His proposed 100% tax bracket would have cut in at an income of £20,000 per annum. Come to think of it, he was a French legislator too; maybe it’s in the water.

Thomas Paine – the author of “Common Sense” ? The Brit with a price on his head by King George? You’re saying he was a French Legislator?

It’s impossible to tax the rich. They will simply raise prices or otherwise manipulate their business interests.

For example, tax wealth. Even if it’s not presently producing income.
Tax unrealized capital gains. Tax citizens for being smarter than average, or better looking than average, or just more talented in any way that’s not shared by all.

(and try not to think too much about how well radical idealism work out the last time, 1789-1799)