Officials declare it a terrorist attack. 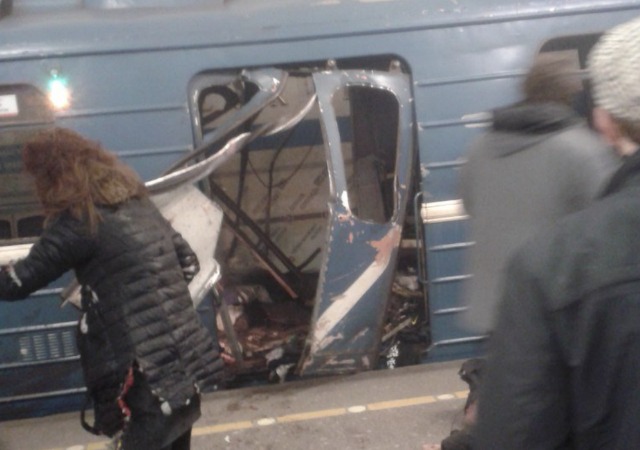 Sources now say that only one explosion occurred between two stations at a St. Petersburg, Russia, underground train station. Ten people have died:

“There was one blast in one site in between (stations) as the train arrived at the Technology Institute station from Sennaya (Ploshchad) station,” the source told Reuters.

President Vladimir Putin was scheduled to meet with Belarusian President Alexander Lukashenko in the city today.

Officials have opened a terrorist investigation:

The Russian Investigative Committee has said on its website that it has opened a criminal case under the Terrorist Act after the St Petersburg bomb.

Earlier, a Russian official used the phrase “terrorist attack” in an interview before the comment was retracted.

The Russian Investigative Committee said it will “continue to check all possible versions of what happened”.

Officials have revised the death toll back to ten. Seven died at the station, one in an ambulance, and two at the hospital.

They have also released this screenshot from CCTV cameras of the possible suspect:

I’m seeing tweets that state CCTV cameras picked up images of the suspect. I haven’t seen the pictures yet.

The Russian prosecutor general has officially called it a terrorist attack.

Witnesses have started to speak to the media about the explosion:

“We were riding in the neighboring car, and at that time it was very crowded: all the seats were taken and many were standing.

“The explosion went off between stations. There was a thundering clap, followed by a strong smell smell and smoke.

“We all moved to the opposite end of the wagon, people jammed together and two women passed out. This all was happening while the train was still moving, it didn’t stop.

“Everyone got out at Tenologicheskom Institute station. There, we saw that the neighboring wagon was shattered, the windows blown out, no light, blood.”

The Moscow Times has reported that officials discovered a third unexploded device at the Ploshchad Vosstaniya station.

Russia’s President Putin has said investigators are looking into what he described as a “possible terror attack”, which is “among the theories” for the St. Petersburg subway blast.

From The London Times:

Police confirmed to the Tass news agency that there had been a blast at Sennaya Ploshchad station in the centre of the city. There were also reports of a second explosion at Tekhnologichesky Institut station.

*I will update this post as more information comes out.

The ad embedded in this article is for an electrically operated pressure cooker. Sick humor, or does someone know something?

The biggest mystery in all of this is how the MSM pins the blame on Trump.

This just in from the wire services which are on site.

This blast and the murdering of non-Muslims have nothing – repeat, nothing – to do with Islam. Islam, it bears further repeating, is a religion of peace (even though the word Islam translates into “submission”).

Watch here for latter reports which will of course confirm that these killings had nothing to do with Islam.

The LHMFM wants you to know that in particular this attack has nothing to do with the several verses in the Quran that commands Muslims to terrorize non-Muslims for their failure to believe in Allah.

“We will cast terror into the hearts of those who disbelieve for what they have associated with Allah of which He had not sent down [any] authority. And their refuge will be the Fire, and wretched is the residence of the wrongdoers.”

Only an racist, bigoted Islamophobe could conclude that this the most peaceful of religions could possibly justify terrorism.

Putin used a similar attack to invade Chechnya. I suppose he’ll blame this on one on Ukrainians…

I see those crazy, right-wing, Christian extremists are at it again…oh wait…

Attacks, but from where? Syria, Iraq, Afghanistan, or Ukraine? Ukrainians have been victims of social justice adventurism (e.g. elective regime change/coup) and anti-Russia propaganda. Plenty of high-value fake news and real violence to force a terrorist action.