Opposition parties have three days to file complaints to the election board.

On Sunday, Turkish President Recep Tayyip Erdogan declared victory after a referendum vote gave him even more power with a slim 51% victory. But he has already received backlash from opposition groups and international monitors who found problems with the election.

Erdogan even warned people not to fight the referendum outcome because “it’s too late now.”

Many people, including international monitors found fraud occurring during the election. From Sky News:

“The referendum took place on an unlevel playing field and the two sides of the campaign did not have equal opportunities,” said Cezar Florin Preda of the joint mission of the OSCE Office for Democratic Institutions and Human Rights (ODIHR) and the Parliamentary Assembly of the Council of Europe (PACE).

“The legal framework, which is focused on elections, remained inadequate for the holding of a genuinely democratic referendum,” the monitors said in a joint statement.

Since July, Turkey has remained under a state of emergency after a failed “coup.” According to OSCE, this meant that citizens “were not provided with impartial information about key aspects of the reform, and civil society organizations were not able to participate.”

The Republican People’s Party (CHP), the main opposition party, called into question a few ballots that counted even without an official stamp. But the Turkish election board decided “to count all ballots” even though some “contradicted Turkish law.”

Some people even posted video of voter fraud on Twitter.

As the votes came in on Sunday, the opposition parties already voiced challenges to the outcome. The CHP stated the party “will challenge 37 percent of the ballot boxes,” but expected that number to rise to 60%. The People’s Democratic Party, the pro-Kurdish opposition party, wants “to object to two-thirds of the ballots.”

The parties maintained “that as many as 2.5 million ‘unsealed’ ballors – not bearing the official stamp – were cast and counted.” From The Associated Press:

Opposition parties, however, cried foul on the vote. Bulent Tezcan, deputy chairman of the Republican People’s Party, or CHP, cited numerous problems in the conduct of the vote.

“This is not a text of social consensus but one of social division,” Tezcan said. “There is a serious and solid problem of legitimacy that will forever be debated.”

Tezcan also stated that authorities cannot “determine how many ballot papers may have been irregularly cast.” He explained that many officials counted ballots behind closed doors and did not allow the international monitors to watch the counting “for at least one-and-a-half hours until the party’s complaint was accepted.”

The opposition claimed that the state run media did not provide them with enough coverage, which the international media backs up.

The CHP has three days to bring its complaints to the election board since officials will release official results in 11-12 days.

If the CHP does not approve of the election board’s decision over its complaint, then the party “can file an appeal to the Constitutional Court.” The CHP will even take its complaints to the European Court of Human Rights if they have to.

If everything stands, then Turkey will rollout the changes in phases. As CNN points out, no one knows exactly when each change will occur. Most importantly, the president holds all the power since the referendum eliminates the prime minister role. But here are other changes from CNN: 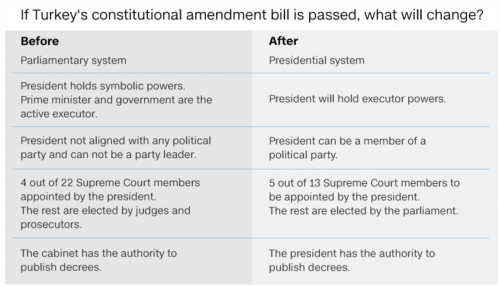 Most will not happen until after the presidential election in 2019. The Turkish government has shot down questions that officials will hold early elections so Erdogan can grab his powers before 2019. Bloomberg reported:

[Turkish deputy prime minister] Mehmet Simsek said the government will instead focus on restoring political stability and kick-starting growth now that voters have approved a shift from a parliamentary-led system to an executive presidency. The comments quelled speculation the ruling AK party would hold a snap election, providing a respite to an economy that’s suffered from years of political turmoil.

Ziya Meral of the Centre for Historical Analysis and Conflict Research in Britain offered this analysis:

“Both the close margins and disputed votes will taint Erdogan’s sense of victory and ease of handling the process to follow. This strengthens the Turkish opposition but also would mean international actors will be more vocal about asking for some of the proposed changes not to go ahead. That can be seen in the Council of Europe’s statement already asking for the independence of the judiciary to be respected. The next phase will be socially and politically intense, with protests and harsh political polemics.”

German Chancellor Angela Merkel and German Foreign Minister Sigmar Gabriel have reached out to Erdogan to convince him “to address concerns about their country’s referendum on a new constitution and open talks with opponents.” From The Financial Times:

“The tight outcome of the referendum shows how deeply split Turkish society is,” the statement by Ms Merkel and Mr Gabriel said. “The German federal government expects the Turkish government to seek respectful dialogue with all political and societal powers in the nation after a tough referendum campaign.”

Was it the Russians?

Sounds like the kind of election Democrats have wet dreams about.

The OSCE complained about just the sort of stuff Trump faced every day, but if Trump had lost I am sure nobody would have stepped in to review things here.

And that’s why the OSCE waited until now to speak up. They could have raised their issues during the campaign and said what needed to be fixed while it was still possible. But they wanted this to go through and thought they could get the NO vote to win, in which case they would have said it was clean enough.

I have no opinion about which side I’d rather have win, but these people like OSCE can go suck it. I am all too familiar with their strategies and rhetoric.

Is there an Islamic state that doesn’t have fundamentally fraudulent elections? Not that they should even have elections since elections are an infidel idea and thus totally haram.

Dang! Now I have to go find my surprised face to put on.