The biggest ISIS recruiters​ are the things cherished in the West. 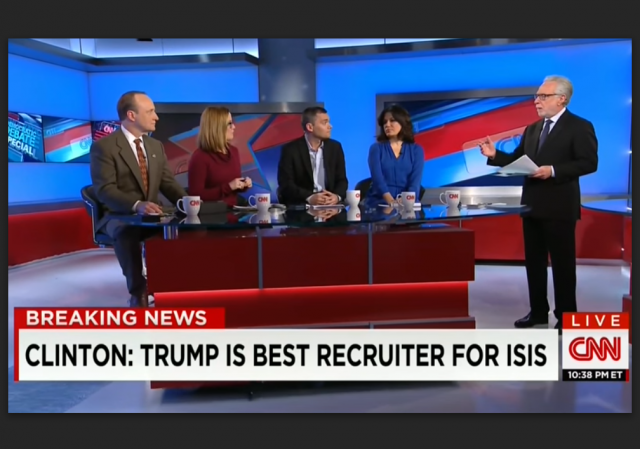 With increasing frequency, many on the left have taken to declaring the words and actions of President Trump and his supporters to be useful propaganda tools for ISIS.

Seemingly a knee-jerk reaction — consistently accompanied by little or no evidence demonstrating its truth — cries of “THIS IS WHAT ISIS WANTS” ring out when the political right embarks on a course of conduct that is less than agreeable to the left.

In the past, we’ve seen this charge leveled when Republicans were reluctant to take in more than 10,000 refugees from war torn Syria, when President Trump issued travel restrictions on seven middle eastern countries via Executive Order, and even when Republicans speak in a way that rubs the left the wrong way.

The most recent iteration of this intellectually lazy argument surfaced in the wake of the United States’ use of the Massive Ordinance Air Blast Bomb (“MOAB,” often referred to as the “Mother of All Bombs”). Charges of an ISIS propaganda victory formulated quickly on Twitter, retweeted breathlessly by a fawning crowd of followers as though the painfully familiar statement constituted some new information of some kind.

ISIS is smiling. Trump dumps MOAB on Afghanistan. Great for their propaganda and recruitment. Keep drawing US in more and more.

You wanna stop ISIS? So do I. So Stop helping them! (We bombed them in Afghanistan-that helps them recruit, we armed them in Syria-remember?

It should be noted this line of faulty logic is not unique among Democrat lightweights. Hillary Clinton made similar statements frequently on the 2016 campaign trail and, just months ago, former President Obama opined, “I cannot think of a more potent recruitment tool for ISIL than some of the rhetoric coming out of here in the course of this debate [on Syrian refugees].”

For the sake of argument, let’s accept the premise that everything from Republican rhetoric to the dropping of large bombs in the Middle East is an “ISIS recruiting tool.” Should we allow this to affect our behavior? Of course not. In fact, this should be such a universal truth that Democrats and Republicans ought to zealously embrace it together. Apparently, however, the left seems to think its actions would be just fine by the ISIS standard. I’m not persuaded.

Indeed, nearly every cause Democrats and liberal progressives hold close to their heart is most certainly, as President Obama would call it, “a potent recruitment tool for ISIL.” Transgender acceptance and encouragement? Gay marriage? Tolerating homosexual behavior in any degree? Political and social equality for women?

The list goes on and on. I am bewildered when I see Democrats talk about Republican action or rhetoric as an “ISIS recruitment tool,” because it could very reasonably be said that the entirety of the Democratic Party political platform is precisely that.

Yet each time a Republican does something the left disapproves of with respect to ISIS or the problem of radical Islamic terrorism generally, this charge is almost immediately leveled and unflinchingly parroted throughout the liberal argument bubble without so much as a hint of irony.

We should dispense with this lazy attempt to knock down political opponents. To be sure, when this line of thought becomes the primary argument against a particular course of action, it becomes evident that genuine opposition on the merits to such action is lacking.

Yes, the United States’ use of MOAB may recruit terrorists, but so do a variety of things cherished in the West. That doesn’t mean there’s anything wrong with either and I would note that only the former actually results in the death of terrorists.

The nature of propaganda is that anything *could* (and is) be used as a “propaganda and recruiting” tool, but exhibiting vacillating weakness to those people is what gives them their real energy.

Remember, it was our withdrawl form Somalia in 1993, along with our other “measured” semi-responses before and since that gave al-qaeda the space to grow and idea that they could strike with impunity.

The MSM, Clinton democrats etc. are actually wishing and hoping that ISIS recruits more followers solely so they can blame it on Trump.

They openly encourage the killing and torture of innocents by ISIS solely so they can blame it on Trump.

And they use this made-up cover story to support their cause to undermine Trump and the nation..

If we only all just converted to Islam… it would not be the right kind. They would just find other reasons to attack us because, let’s face it, they have developed a taste for it.

The weak horse is gone.

Bombing ISIS does not encourage them. Giving them arms encourages them.

The left is quick to catch on. Do what terrorist want you to do which is shut up and do what they want you to do and there you have it. Victory for oppression over liberty. Thank God our Founding Fathers didn’t worry about being the best recruiting tool for the king! Give me liberty or give me death.

It was true during the Iraq war that the islamic fighter flocked to Iraq and it was a recruiting tool – or at least those predisposed to jihad showed up.

The good thing was that the us military was there to terminate their earthly existance and see the after life with 72 virginians.

ISIS encourages martyrdom. However, dying gloriously in a gun battle or blowing up infidels as a suicide bomber is going to be seen a lot different than dying in a cave from a bomb they probably never even knew was dropped. That’s going to be hard to play for propaganda purposes.

Weaknes breeds more weakness. Did Obamas weakness stop Iran, North Korea, Russia?
Whe asked by Maria Barttiromo about Comey Trump said he kept Hillary out of jail. When asked why he hasn’t fired Comey he wouldn’t give an answer. I have a feeling that Jared and Ivanka want him to keep an enemy as the head of the FBI. I can’t understand why Trump allows enemies stay in powerful positions.

Reading about the left’s penchant for this ridiculous view that the more we harm them the better for them it becomes is like the old Monty Python movie, the “Holy Grail”, where the knight keeps losing limbs but is too stupid to give up. I guess the ISIS terrorists that were on the receiving end of the MOAB thought, wow what a great recruiting tool? How do leftists think this stuff up? Have they even bothered to think it through?

I am going with the “strong horse” theory. Our enemies despise weakness more than anything else. And not only do they fear our strength, but our strength gives aid, comfort and encouragement to our friends – something that has been lacking for the previous eight years.

notamemberofanyorganizedpolicital in reply to georgfelis. | April 15, 2017 at 1:49 pm

Did I spy a “Black Flag” logo on that MOAB?

The biggest ISIS recruiter was Obama and Hillary, and the decision to treat them as allies.

While I entirely agree with the observations in this article, I raise and exception to the phrase “unflinchingly parroted throughout the liberal argument bubble…”.
Parrots can achieve quite remarkable simulations of human speech, but that should not be used to negate clear evidence that the average parrot is far superior intellectually to even the most supercilious Democrat.