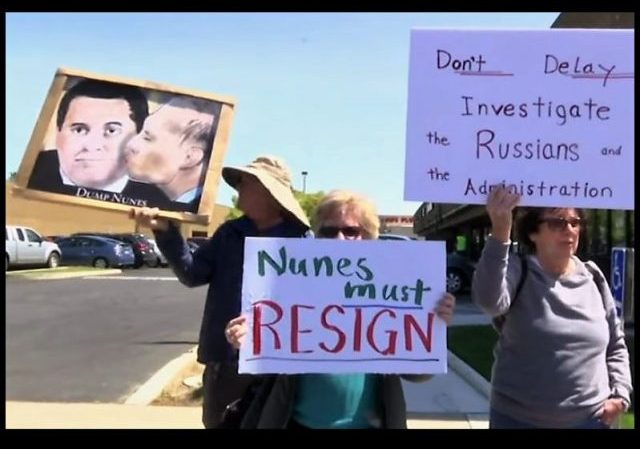 Devin Nunes is now the object of Democrat ire because of his claim that he has seen evidence that presents a possible problem with “unmasking” names of Trump campaign and administration officials by the Obama administration unrelated to Russia.

The allegations are explosive and could open up a wide investigation of Obama administration officials.

That is not what Democrats want, they want investigations focused solely on the as yet unproven claim that the Trump campaign colluded with Russia in the campaign.

The demonization of Nunes, however, does not appear to reflect reality. Nunes has had a concern about unmasking for a long time, according to CBS News: 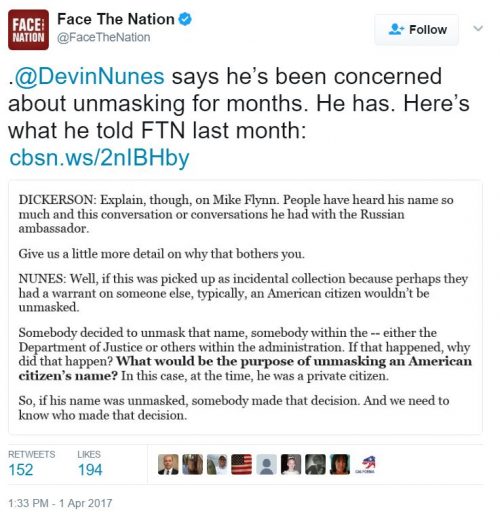 As we move into congressional recess, Democrats are organizing a campaign to get Nunes removed as Chair of the House Intelligence Committee.

“Get out of bed with Trump” and “We need a guard dog, not a lap dog” were among the signs seen and chants heard. Some protesters played the Russian national anthem.

It was Nunes’ first trip to his district since his committee’s investigation into Russian interference into the presidential election — and any links to President Donald Trump’s aides — stalled amid acrimony over Nunes’ handling of the probe and his secretive moves to protect the president.

Nunes spoke on water policy Friday in Fresno at an annual meeting of agricultural lenders. He was quickly ushered in and out of the building through a rear entryway, successfully dodging most of the protesters, according to The Fresno Bee. “Come out and play, Nunes, you coward,” shouted one man with a megaphone, according to The Associated Press. 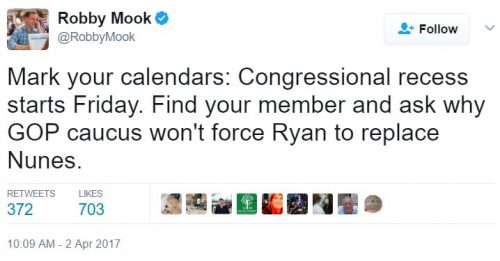 The attack on Nunes focuses on whether he has followed a proper procedure as a means of deflecting from the substance of Nunes’ claims.

.@DavidCornDC: Anything Nunes does from here on out is 100 percent suspect. RETWEET TO AGREE #AMJoy https://t.co/4SvBsgn6Ww

As Byron York pointed out, this focus on process is part of a strategy,  Byron York: 11 key points to remember about Trump-Russia affair:

2) Substance is what matters, Part 2. In recent weeks, a second Big Question has emerged: Did the Obama administration spy on the Trump campaign and/or transition team? That’s the issue at the heart of the Devin Nunes brouhaha, and the answer — did this happen or not? — is more important than where or how Nunes got his information.

It’s unlikely that the deflection on process will work, because Republicans control all the committees in both houses of Congress, John Cornyn: Senate Intel will investigate unmasking, Russian intervention:

Sen. John Cornyn, R-Texas, said Sunday that the Senate Intelligence Committee will investigate the possibility that U.S. officials unmasked members of President Trump’s White House in a surveillance sweep, as well as Russian meddling in the election.

“Well, I do think they are connected,” Cornyn, who is Senate majority whip and a Senate Intelligence Committee member, said on CBS News’ “Face the Nation.” “And they both will be the subject of our inquiry on the Senate Intelligence Committee. Obviously anytime anybody jeopardizes the privacy rights of an American citizen, and as part of an intelligence gathering process that would be unauthorized, and then leaks that information, that’s potentially a crime. And that’s something we ought to pursue.”

Sen. Angus King, I-Maine, who is also a member of the Senate Intelligence Committee, agreed that the question of unmasking needs investigation.

“Yes, absolutely,” said King, on “Face the Nation.” “But I think, you know, that really obscures the much, much larger issue of what did the Russians do in our campaign? How did they do it? Was there a relationship with one of the other of the campaigns?”

Well yeah. That is because one, “russian involvement with the Trump campaign” is a socialist fiction. No “evidence” exists because THERE IS NO EVIDENCE! The other, “unmasking of Trump officials that may have been legally surveilled” was done BY THE SOCIALISTS! And whoever “leaked” the information is due to be arrested for FELONY violations of law. Tell me, HOW did the socialists and their lapdog media “know” what Flynn said? Were they in the room? NO! There was a transcript. There is no other way. PRESIDENT TRUMP was right. Obama’s henchmen surveilled Trump Tower and who knows how many other venues.

No surprise as that is democratic/alinsky way…

Democrats want anyone who tells the truth about them removed.

There is tons of evidence, going back to 2015, that the Obama administration spied on Trump and others and may have done so illegally, including unmasking names illegally. The Dems are scared to death that the illegal spying story will consume everything and destroy any chance they have of winning seats in 2018.

I think what will be found is that the so-called Russian connection was used as an excuse to spy on Republicans before the election. So far, there has been zero evidence that there was any collusion between Trump and/or his associates and the Russians.

It’s interesting that David Tafari (in the first video) makes the claim that not only did Flynn talk to the Russians but he promised them that the sanctions would be lifted as soon as Trump took office. Not only did that not happen, but there is no evidence that Flynn ever made such a promise. This proves the Dems are desperate to regain the momentum on the Russian connection, and they will tell any lie that will contribute to that.

The Dems do not want answers to whether the Russians interfered in our election process, what they did, who they favored or who, if anyone assisted them. To answer any of these questions, they would need to provide proof of their accusations. This would then identify the physical source of the intelligence answering these questions and would place several Dem operatives in peril of criminal prosecution as well as open the door to proving that a sitting Presidential administration used government resources to surveil a political opponent, possibly illegally.

As long as the Dems could hold hearings, in which no evidence could be displayed due to classified information laws, they were happy. They could continue their attacks against the President using innuendo. Now that Nunes has seen actual documents, which purport to show that members of the Trump campaign and transition team were surveilled, that their identities were made available to people not authorized to have that information and that all or part of this was done in violation of existing criminal law, the Dems are trying to block the very investigation that they have been demanding for months.

That the Dems are not attempting to block the intelligence investigation in the Senate strongly suggests that they do not fear that the committee will not expose any evidence which might prove detrimental to the Dems or their operatives. IN other words, they expect that the fix is in, in the Senate.

“The Dems do not want answers to whether the Russians interfered in our election process, what they did, who they favored or who, if anyone assisted them.”

That’s because the answers are ‘They didn’t, they tried but failed, Hillary, and Obama.’

At some point, chronic Dem hysteria is no longer motivated by rote obstructionism, but rather by fear. From all the noise over this, I’d guess they’ve reached that point, and that they know that Nunes is on the trail of things which will put a considerable number of Dems on trial right when their 2018 campaigns need to move into high gear.

I read the Byron York article yesterday too – it’s an excellent analysis & summary.

Methinks the Democrats shall live to regret the Russian Hoax as it is turning on them.

Susan Rice was the unmasker? Now it all starts to make sense.

The Obama official who unmasked the intelligence documents is Susan Rice.

notamemberofanyorganizedpolicital in reply to txantimedia. | April 3, 2017 at 2:15 pm

Man, do I hope and pray Cernovich’s reporting is correct. Have been back testing his claim but have not be able to validate it yet. Still researching….

Cernovich’s report has been confirmed by Eli Lake of Bloomberg – https://www.bloomberg.com/view/articles/2017-04-03/top-obama-adviser-sought-names-of-trump-associates-in-intel as well as Circa – http://circa.com/politics/accountability/white-house-logs-indicate-susan-rice-consumed-unmasked-intel-on-trump-associates

Major Garret of FoxNews asked about it at today’s press briefing, but Spicer declined to speculate on the veracity of news reports, preferring to hear it from the Congressional committees investigating it.

With so many people with real contacts with the intelligence agencies stating clearly that no evidence exists to show a Trump Russia connection, one has to wonder how much longer this absurdity will continue. All of this nonsense centers around some very specious claims for which no one has offered one slightest piece of evidence and yet the cries of paranoia and terror that Trump was involved with the Russians simply will not go away.
>
This entire issue would seem to be one of an emerging litmus test. If you are a Leftist, then you must claim Trump is a Russian stooge, but the evidence is just too well hidden. After all the condemnation over the birther claims of Republicans concerning Obama (even though there was some evidence for that), you would think the Democrats would begin to realize that the longer and louder they carry on these accusations without any evidence, the worst the repercussions will be when of all of this is found out to be nothing.
>
Worse still is how evidence of Obama and/or his people carrying out surveillance on Trump in a very Nixonian manner continues to grow such that it can no longer be ignored and yet the Democrats persist in demanding everyone damn Trump for his nonexistent relations with Russia while ignoring the major problems with Obama. How is this anyway to restore the Democrats shattered credibility as a viable political party?

Since the Democrats are accusing Russia of committing an act of war by meddling in our election, we need to revisit the issue of Obama’s DoS funneling approx. 350k to an Israeli group, V15, to fund their “vote for anybody but Netanyahu” campaign in 2015. Incredibly the subcomittee of the Senate Homeland Security Government Affairs committed that investigated the matter said DoS didn’t do anything wrong since it place no restrictions on how V15’s parent organization, OneVoice, used the money after they got it. Subsequently OneVoice converted its entire Tel Aviv HQ into V15. And V15 hired a consulting firm that consists basically of senior Obama 2012 campaign staffers, headed by Jeremy Bird. Bird was Obama’s national field director.

If anybody is looking for collusion between a foreign government and a domestic political organization, here it is. It’s implausible deniability. The DoS knew exactly what was going on and structured the grants so that they could turn a blind eye to it.

How is this not an act of war?