Add Devin Nunes to list of takedowns that have Dems cheering 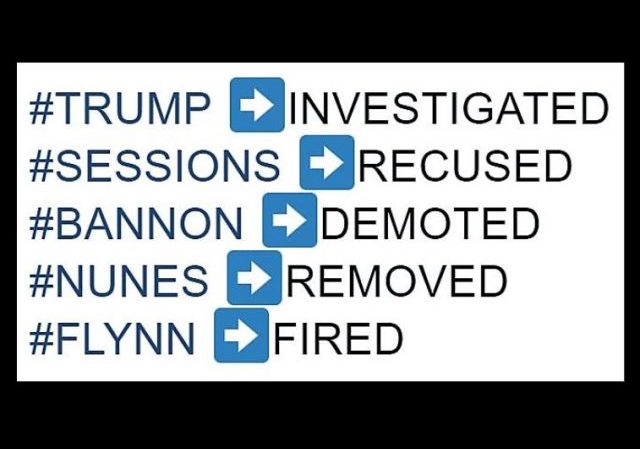 When Devin Nunes stepped away from the Russia probe despite his position as the Chair of the House Intelligence Committee, it was a major victory for those seeking to obfuscate and stall one of the two tracks of investigation: The unmasking of names that Susan Rice has admitted doing, though she claims no political motive.

The event precipitating Nunes withdrawal was a series of ethics complaints filed by left-wing groups, including MoveOn.org, which triggered a House Ethics Committee investigation. That fact that there is an investigation means nothing in itself.

Mercedes Schlapp points out how the tactics used against Nunes helped shape the ultimate decision:

While Republicans are figuring out their new governing role, liberal Democrats are quietly winning small victories with their “all resistance all the time” approach.

Their takedown of House Intelligence Committee Chairman Devin Nunes is just one example of how liberals have been able to game the current congressional structure to get results. Left-wing groups such as MoveOn.org submitted a complaint to the Office on Congressional Ethics — the same office created by ex-Democratic Speaker Nancy Pelosi back in 2008 — asking whether Mr. Nunes disclosed any classified information.

MoveOn.org stated that Mr. Nunes may have “violated the Espionage Act and the rules of the House by disclosing classified information without the authorization required by House Rules or any other proper authorization.” These are serious allegations, designed to destroy Mr. Nunes‘ reputation and his ability to lead the House probe into Russian hacking and Obama administration snooping in the 2016 election.

But it was the excuse Nunes needed, or House leadership needed, for Nunes to take himself out of the Russia probe.

Was Nunes pushed by House leadership? Paul Ryan’s statement after the announcement suggested to me that that was the case (emphasis added)

“Devin Nunes has earned my trust over many years for his integrity and dedication to the critical work that the intelligence community does to keep America safe. He continues to have that trust, and I know he is eager to demonstrate to the Ethics Committee that he has followed all proper guidelines and laws. In the meantime, it is clear that this process would be a distraction for the House Intelligence Committee’s investigation into Russian interference in our election. Chairman Nunes has offered to step aside as the lead Republican on this probe, and I fully support this decision. Chairman Mike Conaway, a senior member of the Committee, will now lead this investigation in the House. I am confident that he will oversee a professional investigation into Russia’s actions and follow the facts wherever they lead.”

Eli Lake, whose reporting about Susan Rice helped kick off the firestorm, calls the ethics complaints against Nunes frivolous. While conceding that Nunes’ conduct in how he rolled out the revelation was less than forthright, there also were good reasons whey Nunes did so, The Frivolous Case Against the House Intelligence Chairman:

…. the information the White House showed Nunes was serious enough that the ranking Democrats on the House and Senate Intelligence Committees have now agreed for their respective panels to examine whether Rice improperly requested the unmasking of the Trump transition team members. In another era, this kind of thing was called oversight.

This brings us the charges brought to the House Ethics Committee. The committee is investigating whether Nunes violated rules prohibiting the disclosure of classified information when he held press conferences to discuss the reports he had seen. What is the violation? It’s the fact that Nunes said publicly that he had seen summaries of raw intelligence reports that he said inappropriately contained details about the Trump transition and were not related to Russia. While the chairman never acknowledged that the sources of his information were NSA intercepts, any mention of any information collected under the Foreign Intelligence Surveillance Act is technically classified.

This sounds worse than it is. This complaint, brought by a handful of lawyers who have been harsh critics of Trump and by progressive activists like MoveOn.org, is a ruse, meant to distract from the bigger question of how the Obama White House was receiving raw intelligence reports on the activities of Trump and his advisers after the election.

The infraction, if it was one, was not serious. Nunes did not disclose the targets of the surveillance or any details about how the information was collected. There is rarely a day that goes by in Washington when someone in the media is not reporting on classified information. It’s a part of the ecosystem. In most cases these leaks are considered to be the cost of doing business and a way for the press and Congress to hold the national security state accountable.

That the complaint was frivolous further suggests that House leadership felt pressure and pushed Nunes out the door.

To opponents of anything and everything Trump, it doesn’t matter how they get there, whether by outside or inside pressure, or political self-immolation (Flynn).  People are keeping score of how many people in or around the Trump administration are being taken out. And they are looking for more.

The Democratic Party at the national level is welcome to all of the pyrrhic victories it can stand: it has earned them.

Hillary Clinton –> Will Never Be President

notamemberofanyorganizedpolicital in reply to Crawford. | April 8, 2017 at 1:58 pm

What a Beautiful Thought!

Fish & Game need to open season on RINOs. Sessions should never have recused instead he should already issued warrants up and down the line. It is ridiculous that the Republicans are pissing away a house & senate majority with a liberal but eager Republican POTUS. What the heck was Nunes thinking?

If this is what floats the boat of the modern Collectivist activist, they are WAY more pathetic than even I imagined they are.

Agreed – none of these are anything a rational person would call a win. Trump investigated – if they find something, then it was right to happen, and if they don’t, then Dems and the media (but I repeat myself) look like idiots for investing so much into the story. Personally, I think if anyone had found any actual evidence of true criminality it would have been leaked long ago; one of the reasons I think it’s very unlikely that there is anything actually out there on the so-called “Russia collusion” story to find.

Flynn demoted – the more we find out about him, the more he sounds like a big mistake it was good to get rid of quickly.

Bannon demoted – if this happens, it’ll be because he’s never been a part of an actual administration before and isn’t as good at the infighting as he needs to be. My money is on Priebus sticking around, simply because I think he’s good at surviving these kinds of situations. (that says nothing about whether I support him being there or not, just that I think he knows how to protect himself in a knife fight)

Sessions and Nunes are just about the left being able to temporarily work the referees. Meaningless.

My main criticism with Trump is that he hasn’t put Palin out there front and center just to watch the left run in circles.

Whenever he wants to distract them from something, just put Palin in front of a microphone on some other issue.

Ms. Palin may not be interested in serving as the designated pinata.

Nunes stepping down was NOT a win for the Democratic Party. He is still the head of the committeee and it allows the ridiculous meme that he did anything Ilegal to be quickly become a non story, because of course he will be absolved, and we have someone else qualified to hunt this down. He did his part by bringing the truth out.
As far as I know Bannon has not been demoted.

I think the only word that properly describes this phenomenon is “infantile.” “Childish” would be a worthy substitute, though.

Do not underestimate the chess moves of George Soros- none of these “takedowns” or the current rumors about Priebus, Bannon and Conway are anything LESS than PLANNED moves by the Soros contingent- and they are good at subverting Republicans, they’ve been doing it for decades.

As Crawford has pointed out, the world will wake up in the morning and Hillary will still not be President.

Let the Democrats have these crumbs. In the meantime Sessions is the USAG, Pruit head of the PEA, Gorsuch is a SCJ, Devos head of education etc.

As with all things associated with Obama, it was all talk! Trump is delivering the hope and change people have been literally dying for!!

Incidentally, do you remember this congressional ethics office that the House leadership wanted removed basically immediately, before any other business had been begun in the new session? Trump told them to knock it off, and they relented quickly.

Well, the reason they wanted that office removed is because it can launch an ethics investigation based on allegations by outside groups – such as, or chiefly, liberal political activists. And so we have come to this point. Though, mm. No one forced them to buckle to this pressure. They chose to do so themselves.

Filing false charges has been the Leftist tactic for years.

This will continue until either Republican lawmakers stop caving, or until for every Republican charged, we charge 3 Democrats.

I’m going to abstain from the conversation as all of my conceivable response include the words “Blow me.”

And maybe that’s not helpful.