“The DCCC is sticking by its strategy.” 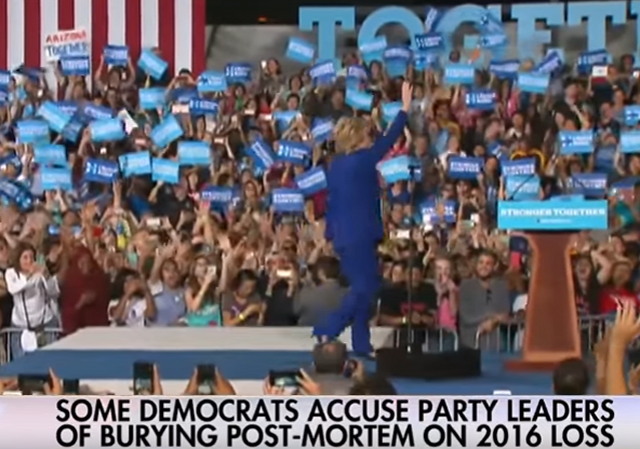 The Democratic Party has apparently conducted an autopsy of their stunning loss in the 2016 election but for reasons which aren’t clear, they aren’t sharing the information with the public.

House Democrats are going to extreme lengths to conceal a report on the party’s problems.

Only about two-dozen lawmakers showed up for the presentation, which sources described as “dense but thorough.” But members were not allowed to have copies of the report and may view it only under the watchful eyes of DCCC staff.

The presentation didn’t focus on Democratic messaging and instead was heavily skewed towards money — how much the DCCC brings in, from where and how those funds are spent.

Some Democratic lawmakers and staffers complained that the cloak-and-dagger secrecy was overblown and actually makes the findings look worse than they are. But the DCCC is sticking by its strategy.

The co-authors of the new book “Shattered” which chronicles the train wreck of Hillary Clinton’s campaign, discussed this issue on FOX News yesterday.

Their comments are very interesting, they even get into why Elizabeth Warren wan’t chosen as Hillary’s running mate. Watch:

With regards to the DCCC and their unwillingness to make the report public, John Sexton of Hot Air makes an outstanding point:

Politico doesn’t speculate on the reason for the secrecy but it does give a hint: “The document is also said to criticize the organization for the lack of diversity in consultants whom the DCCC employs.” Given the tendency of the party’s base to flip out over racial and gender issues, it’s possible this is what the DCCC doesn’t want getting out. Imagine if the report revealed that 90% of DCCC consultants were men and 80% were white.

There would be innumerable think pieces about the party’s hypocrisy from the right and the left would for a circular firing squad. If the DCCC is guarding the results this closely, the numbers must make them look pretty bad.

Sarah Jones of the liberal journal The New Republic provides a window into the progressive mind:

Why won’t the DCCC release its autopsy report?

This latest incident is another data point in a troubling pattern. At any hint it may be asked to account publicly for its failures, the Democratic Party pulls up its drawbridge and retreats deep into itself. It does not seem to grasp that, as a political party, it has an obligation to be transparent to its supporters.

The Democratic Party has a long way to go, much longer than they or their media allies are willing to admit.

They’re still running on high octane outrage but the tank is running low.

“The DCCC is sticking by its strategy.”

The Dems can’t reveal what a flawed candidate Hillary was and the fixing of their own primary.

They should have asked me. I could have told them the problem with the Dimocrat Party, in one word.

notamemberofanyorganizedpolicital in reply to Petrushka. | April 29, 2017 at 12:29 pm

I hope they keep doing that “voodoo” they do so well for a long time to come. It has finally become a winning strategy – for the right and for the country.

I suggest they go full on diversity. They should set up a public draft like the NFL. Positions to be filled by racial, ethnic, and sexual proclivity. That would be a sure winner. Show them what democrats are all about.

The Party has a serious problem; its voters are barking moonbats. But without the moonbat vote, the Party is stone dead. It must appeal to—even suck up to—the moonbats to survive.

But if the Democrats don’t do something seismic in the near future, they risk losing the moonbat vote to the Socialists, who are flanking them to the left. Before Bernie the Red showed how popular the Communist “Democratic Socialist” platform was, the Dems could be confident of sweeping up America’s leftoid voters, but now that they’re no longer the only game in town for a Progressive, they’re in danger of dying as merely “Liberal Lite”.

So the real threat to the Dems is Bernie and his fellow travelers, not the Republicans. But obviously they aren’t going to say that in public.

The Republicans have serious schism problems, too; particularly, they have to stop running weenies as candidates. To keep the mysterious “women’s vote” they must run alpha dogs, not Pajama Boys in suits and red power ties.

The moonbat vote had its heart set on Bernie. When the Hillary people, Debbie “ringlettes” Wasserman and Donna Brazile rigged it for Hillary, that’s when they lost the moonbat vote. That was the most important value of Wikileaks’s work, and that had nothing to do with Trump, Cruz, or any “Russians.”

Add to that Hillary’s cold fish personality, identifiable lies, elitist values, law-breaking, zero accomplishments except stealing and fraud, no identifiable message beyond extending obastard’s killing of capitalism (which she’d NEVER do), and ridding the earth of males and, voila, she lost.

The reason it’s not being released is obvious – Obama destroyed his party, and to admit it would further tarnish the legacy of the first Black POTUS. Must protect the narrative at all costs. Nice leadership you got there Libs…

The Clintons and other big Dem :::cough cough::: “leaders” like Reid and Pelosi deserve some of the Thanks for that also methinks…..

Ah well, the GOPe is hiding its autopsy as well.

However, I can reveal it here:

When the democrats opened the dead body, they found the tumor that caused the death: Hillary Clinton.

Further hastening death was oversight of care by the democrat’s boy-doctor, barack.

The good news for the Dems is that Perez, their new DNC chairman, is full of hatred and anger just like hillary. He has gone so far now to say that any Dem candidate who is not pro-choice will not get the backing of the Demorat party! Thank you Mr. Perez. I thought only Republicans could snatch defeat from the jaws of victory! Maybe when is fired they will replace him with another hater, Fauxcohuntas!

Recall the contrast of 2008 and 2012, when the Pubs, to their credit, made their campaign autopsies more open. Not that the Pub insiders learned anything, of course, they were all set to nominate Jeb this time.

So they are going to continue to use rent-a-rioters?

“Why won’t the DCCC release its autopsy report?”

Alternative explanation: Because it’s about money. Where the money comes from (including unions and billionaires) and where it goes (including bribes and bank accounts in the Caymans).

Would you want the whole world to know all of that if you were getting a chunk of the money?

“Only about two-dozen lawmakers showed up for the presentation, which sources described as “dense but thorough.” But members were not allowed to have copies of the report and may view it only under the watchful eyes of DCCC staff.”

If Sandy Burglar wanted a copy he would have left with a copy.

Lol. Found a pocket of goofballs, I see! ‘Moonbats’? You should be so lucky! Sure, the Dems are corrupt AND clueless, but that doesn’t mean the GOP is in great shape either. The moonbats, including me, want to help the 99%, including you.

Both parties are betraying US, and the way they succeed is by dividing US. Quit falling for it.

The establishment is the enemy and what scares them is the idea we might unite. I am a Sanders supporter who wishes you all well, and I am willing to give Trump a chance.

If you want to talk, fine; if you’re content to call us names, your loss :^)