Dave’s Mom segments were some of my favorites. Pies, cooking, and Olympics! 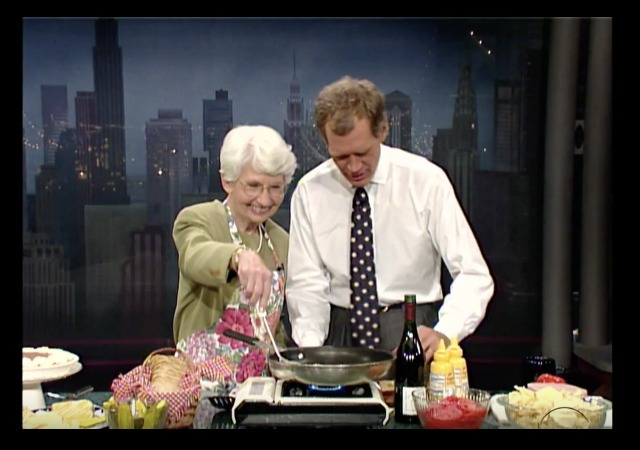 So sad. David Letterman’s mother Dorothy Mengering passed away at the age of 95. Who can forget her great segments on Letterman’s late night show?! From The Hollywood Reporter:

Seen via satellite from the kitchen of her modest home in Carmel, Ind., Mengering was at her comic best for the feature “Guess Mom’s Pies,” in which Letterman had to pick which one of his many favorites she had lovingly prepared for the holidays.

Her first on-camera appearance on the CBS show came during the 1994 Winter Olympics in Lillehammer, Norway, when she offered to bring ice skater Nancy Kerrigan hot chocolate and asked Hillary Clinton if the first lady could get the speed limit adjusted in Connecticut.

“After Lillehammer, I couldn’t believe how it all took off,” she told The New York Times in 1996. “I think it’s about the idea of mom and of a family. People are eager for families to be like they used to be. Even though there are lots of working moms and single-parent families now, you can still be a family in spite of the size and form it takes.”

Mengering reprised her role as a Late Show “correspondent” for the next two Winter Games in Nagano, Japan and Salt Lake City, and she taped segments from London for Dave as well.

Mengering published a 1996 cookbook, Home Cookin’ With Dave’s Mom. In it were recipes for “Dave’s Fried Baloney Sandwich,” “Jan’s Sauerkraut Balls” and “Gretchen’s Salad Dressing” — tributes to her son and two daughters — and instructions for how to make pies like blueberry, sour cherry, pecan molasses and chocolate chiffon.

Here are a few YouTube videos of Dave’s Mom. Please go and search for Dave’s Mom. You’ll find many more and will enjoy them!