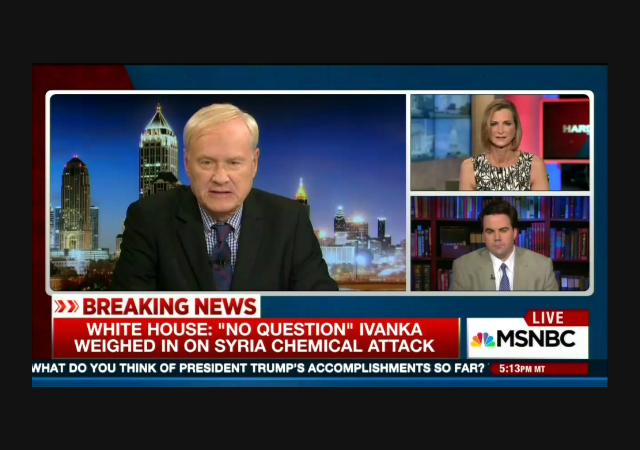 On this evening’s Hardball, Chris Matthews repeatedly analogized the Trump family to the Tsarist Romanov family that ruled Russia. Matthews ominously concluded, “we know what happened to the Romanovs.”

Of course, “what happened to the Romanovs” is that the Tsar and his family were killed by Bolshevik troops in 1918, during the Russian revolution. Nice analogy, Chris.

Matthews focused on the fact that President Trump views family members, notably Ivanka, Jared Kushner, and sons Donald, Jr. and Eric, as his most trusted advisers.

CHRIS MATTHEWS: It seems to me there’s always an element of almost Romanov absurdity, royal family absurdity, with the Trumps now. And the only people that the president can rely on are his son, his daughter-in-law, I mean his son-in-law, and his daughter . . . I mean, it is the Romanovs! The real advisors to this president, he’s saying, is the family—the royal family.

ROBERT COSTA: Kushner, Ivanka, even the sons, Don and Eric, they have the ability, though they don’t always do it, to weigh in on major decisions, domestic and foreign.

MATTHEWS: And they weren’t elected. Anyways, it is a royal family. Thank you Robert Costa, Ann Gearan. We’re seeing this. We know what happened to the Romanovs.

What a douche. I’m otherwise speechless.

Like the blind man said when they handed him the Matzo cracker, “Who writes this sh#t?”

Little Prissy should go back to yakking about his tingles down his legs over Obama’s……..

A little bit of wisdom not limited to the United Negro College Fund.

So, is he comparing the Democrats to the Bolsheviks, and the Republicans to the Mensheviks?

Or is he saying the President should beware the Ides of March? (If so, that’s only four days off.)

Matthews does a program devoid of facts.

Huh? The Ides of March was nearly a month ago. When you wrote this it was two days to the Ides of April.

Would Matthews feel more at home in a Beer Hall Putsch or as a Trotskyite? I’ll take the present “Romanovs” over the recently evicted Mugabes at 1600…. anyday.

The hyperbolic anti-Trump frenzy at MSNBC is paying off for them in terms of viewership. CNN execs have to be jealous the same isn’t working for them.

But to anyone who isn’t 100% on board the total trashing of this administration must be getting tired of it.

The Reds won the Russian Civil War. But to do so they had to defeat what were called the “White Russian” armies who were trying to defeat the Communists. It was not all one-sided. And Matthews seems to think that his side is not only going to win, but win without casualties. He is assuming facts not in evidence.

We’ve got most of the veterans, and they’ve got all the folks who feel threatened by the wrong chicken sandwich shop opening on campus.

Do they keep this guy on just for us to laugh at? I was seriously wondering this but then I realized most democrats are just about as hilarious.

Comedy is not dead!

Killed. By the left. Curious.

So….is Chrissy admitting he’s a Bolshevik/Communist? Or at least giving his tacit approval?

Chris Matthews does feel a tingle go up his leg when a communist speaks, so, yes you are right.

So what’s his take on JFK’s Attorney General?

Does anyone think he would be making this comparison about Bill or Chelsea Clinton had Hillary won?

I could imagine his tingles going further UP his leg.

Think of msnbc and cnn as trolls that are there to generate traffic on their networks. They have no other function. Their shows are abysmal and they have no audience except people who hate Trump and any conservative. They love the raw meat that O’Donnell, Madcow and this idiot throw out every night. To them, it is a gore fest of Trump hatred and nonsense. Just like the msm playing up the BIG contests that are going on in the special elections as a referendum on Trump. We all know they aren’t but the msm is hoping that the R’s will lose. Ain’t going to happen.

How many ways can you say, will no one rid me of this meddlesome priest?

How about, “Will no one rid us of this horrible commentator?”

Pointless to take issue with such total insanity, but just since it needs saying, it’s a completely inane analogy – the Romanov’s at the end were foolish people who let themselves get run into the ground by a horde of advisers and Nicholas never was really in control of anything himself.

If he wanted to make a real analogy about powerful families, he should have picked the Borgia’s, the Medici’s, or the Corleones (yeah, they’re fictional, but just barely) The Italians seem to have a real talent for this kind of thing, probably because they’ve been doing it for millenia.

If we can all agree the Clintons are best served by comparison to the Clampetts, would that make HRC Granny? Or maybe Jane Hathaway? I don’t know where Chelsea fits in. Some gal back in Bugtussle.

No, Chelsea would be JETHRINE.

Or maybe Ellie May’s pet monkey than was on set for a couple of years, Bessie.

I would dispute that analogy. The Clampetts were at least lovable and harmless.

More to the point, ALL of the Clampetts were honest people.

ALL of the Clintons are vicious liars.

I wonder what the media would say if this sort of thinly veiled threat was leveled at a Democrat.

I guess ol’ Mr. Matthews is advocating machine gunning the grandkids as well, then tossing all the bodies down a mineshaft in the American equivalent of Ekaterinburg? Maybe burn the bodies first?

Hey, Chrissy, maybe they’ll call you in to rape Melania first, wink-wink. Apparently with you that would earn some positive coverage.

Thankfully, Matthews wouldn’t be up to the task.

I am sure he will be issuing a full apology. Or not. He is an ugly man, on the inside, where it counts.

The only sensation Matthews is feeling on his leg these days is Trump peeing on it.

The Bolsheviks were members of the majority Russian Social Democratic Party.

Chrissy needs to stay on his meds. Did he not learn anything from Ashley Judd’s rant?

Matthews has had senile dementia for at least ten years. It’s time to get him to his rocking chair.

“Chris Matthews repeatedly analogized the Trump family to the Tsarist Romanov family that ruled Russia. Matthews ominously concluded, “we know what happened to the Romanovs.””