“If he managed not to scream, others would join in, beating him with wooden sticks or metal rods.” 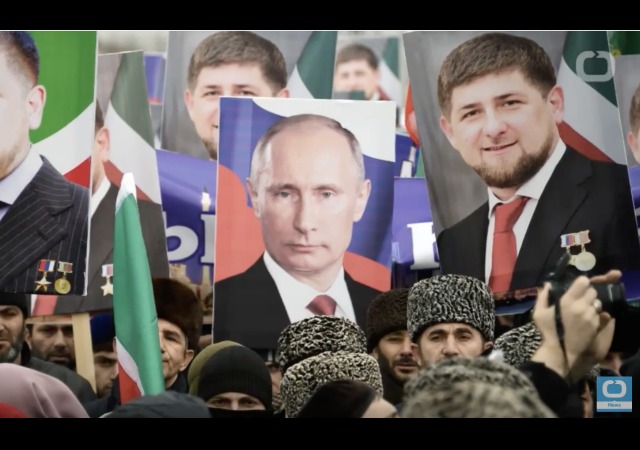 Earlier this month, Russian newspaper Novaya Gazeta reported that at least 100 gay men disappeared in Chechnya due to “their non-traditional sexual orientation, or suspicion of such.”

Chechnya and Russia immediately denied these claims, but outlets have started to reach out to those who had been detained, thus giving support to the report. From The Guardian:

At least once a day, Adam’s captors attached metal clamps to his fingers and toes. One of the men then cranked a handle on a machine to which the clamps were linked with wires, and sent powerful electric shocks through his body. If he managed not to scream, others would join in, beating him with wooden sticks or metal rods.

As they tortured him, the men shouted verbal abuse at him for being gay, and demanded to know the names of other gay men he knew in Chechnya. “Sometimes they were trying to get information from me; other times they were just amusing themselves,” he said, speaking about the ordeal he underwent just a month ago with some difficulty.

How did the officials catch Adam? A gay friend called him. The Guardian continued:

“He called me, and in a very calm and normal voice suggested meeting. I’ve known him for a long time, so I didn’t suspect a thing,” said Adam. But when he arrived at the arranged meeting place, he realised it was a set up. There were six people waiting for him, some of them in uniform, and they shouted that they knew he was gay.

At first, Adam denied it, but when it became clear the men had read messages he had sent to others, he admitted he was indeed gay. He was put in the back of a van and taken to the detention facility, where the men were locked in a room and slept on concrete floors. “They woke us up at 5am and let us sleep at 1am. Different people would come in and take turns to beat us. Sometimes they brought in other prisoners, who were told we were gay and were also ordered to beat us.”

Adam, who is using a different name, and the others The Guardian spoke to have thankfully escaped Chechnya. Some were not so lucky according to the Russian LGBT Network:

Young man from Grozny, gay. Few month ago, he moved to N (one Russian city). He wanted to reside there, but did not manage to get a job, and was going to return to Chechnya in the middle of March. He tried to reach his friend back in Chechnya, but failed. In a week, his friend contacted him and told him, that he had been just released. He was detained by some security officials on suspicion of homosexuality. In order to get the confession, they beat him with a hose and tortured with electricity. He reported that about 30 people were locked in the same room together with him. According to him, the security officials themselves stated that the order came from the leaders of the Republic. The detained were forced to share the contacts of other gay men. The more the person informed, the longer he was detained.

Another one person who contacted the Network reported that his acquaintance was also detained on suspicion of homosexuality. Messages in the social network “VKontakte” were the cause. People in the “Terek” uniform (Special Rapid Response Team) put a young man in a car and took to an unknown location. Family was not informed about the reasons of detention. The young man was detained and tortured for several days. The relatives managed to identify the place of detention. The father was told that that his son would be publicly ashamed on TV and then released. The young man was indeed released, the conditions are unknown. His whereabouts are unknown. But there is an information, that he never left Chechnya.

Why Did This Happen?

So why did Chechen authorities all of a sudden decide to start a gay cleansing campaign? The LGBT wanted to hold pride parades. From PRI:

The abuses were first publicized in the Russian newspaper Novaya Gazeta, says Natalia Antelava, editor-in-chief of Cody Story. She says they probably stemmed from LGBT activists’ request to have a gay parade in the region.

“There has been a very strong outcry in recent days across the North Caucasus because a Russia LGBT group has applied for permission to hold a gay parade in the cities across the North Caucasus,” Antelava says. “They were denied, of course, because gay parades are not allowed in Russia. But it seems to have resulted in this witch hunt on gay men.”

Ramzan Kadyrov has been in charge of Chechnya for years and has pledged allegiance to Russian President Vladimir Putin. This means Putin has turned a bling eye to the numerous human rights violations in Chechnya.

Gay Chechens will marry, forced to suppress their sexuality and never admitting it.

The Chechen government has even blackmailed gay Chechens as The Guardian reported:

Akhmed, whom the Guardian met in a different location to Adam, always knew he was gay, but forced himself to bury the feelings until a few years ago. His first date with a man ended in disaster, when the other man informed on him to the police.

It turned out that Akhmed’s date had himself been previously “caught”, and was working to identify and out other gay men in return for the police not telling his family. The police now demanded money from Akhmed, or threatened to post compromising material about him online. Many gay men were blackmailed in this way over a period of several years, but the events of recent months have taken the persecution to a whole new level.

Since Chechnya is predominately muslim is anyone really surprised at this? One thing that Beslan showed is that the Chechnya muslims aren’t particularly humane.

Homosexuals in the USA, upon learning of this incident, “We won’t notice anything ugly about Islam. And we’d prefer you didn’t either.”

Ramzan Kadyrov has been in charge of Chechnya for years and has pledged allegiance to Russian President Vladimir Putin. This means Putin has turned a bling [sic.] eye to the numerous human rights violations in Chechnya.

If one has a situation involving abuse of this sort, and one can pin the blame on either

It is interesting that you would pick a gay prosecution story on Easter. Especially considering that adherents to the Christian faith are all but disappearing from Muslim controlled countries across the globe. It has almost disappeared from Chechnya as parishioners have had to flee to Russia for protection, those that have not simply disappeared.

Islam, the religion of peace.

And after all that, they gave them tickets to fly on United. The Horror!!!