Millions of Americans in 49 remaining states saddened by the news. 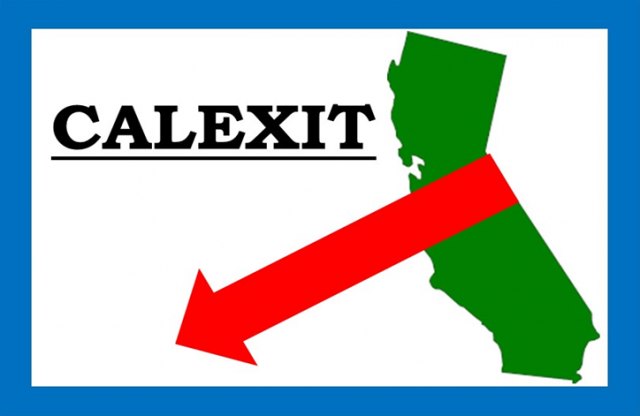 I have a sad update for those Legal Insurrection fans who were hoping that California’s move to secede from the union would be successful.

Supporters of the #CalExit ballot measure officially ended their efforts this week.

The drive to make the nation’s most populous state its own country, with what would be the world’s sixth-largest economy, has drawn extra interest after last year’s election of Republican Donald Trump as president.

But the Yes California Independence Campaign faltered after its president, Louis Marinelli, revealed ties to Russia. Marinelli said in a lengthy message to supporters Monday that he is seeking permanent residence in Russia because of his “frustration, disappointment and disillusionment with the United States.”

Part of the problem with the #CalExit efforts involved a key organizer’s ties to…Russia.

The campaign — which already faced an extremely difficult road to California secession — got some bad publicity in December to go along with its incredulous publicity when it was discovered that its leader, Louis Martinelli, actually lives in Russia. Now, Martinelli says he intends to make Russia his new home permanently.

In a farewell statement on the Yes California website, he discussed the difficulty his wife, a Russian national, has had with the U.S. immigration process and his frustration with what he describes as media efforts to undermine the campaign as well as “anti-Russian hysteria.”

“As I have stated in the past, I do not wish to live under the American flag. I do not wish to live under the American political system or within the American economic system. Regardless, I had long planned to eventually return to occupied California and struggle for her independence from the United States so we could build the kind of country that reflects our progressive values. However, while my frustration, disappointment and disillusionment with the United States remains, these feelings now point me in a different direction. I have found in Russia a new happiness, a life without the albatross of frustration and resentment towards ones’ homeland, and a future detached from the partisan divisions and animosity that has thus far engulfed my entire adult life.”

However, for those of you who a sad that California’s electoral votes and progressive influence will remain, there is a silver lining. One of the #CalExit organizers is starting a second group to move another secession measure.

One of the leaders of the group behind the “Calexit” proposal for California secession is making an exit of his own. Marcus Ruiz Evans, co-founder of Yes California, announced today that he is leaving the group in order to join a new organization that plans to take over the effort. The move comes as Yes California is being scrutinized both for its ties to Russia and for its lack of fundraising.

Evans is joining the nascent California Freedom Coalition, which plans a similar proposal that would put the question of state independence before voters in 2018 (rather than in both 2018 and 2019 under the current would-be measure).

So, I still may be able to live out the dream of being a foreign correspondent after all!

Interesting picture. I suppose that after the black scarfed Freedom fighters defend California, someone will be along to confiscate all those weapons.

Those guys are there to keep people from escaping.

Maybe we could all go West to the San Andreas fault and bring our shovels. That way we could dig for a long weekend and set them free!

I have a better idea. Let the America-loving Californians all settle in the northern part of California and actually create that new State of Jefferson. It’s not as far fetched as the whole state seceding and would do a lot to quell California’s 54 electoral votes and Sacramento’s stranglehold on the American economy.

No! Leslie and I live in San Diego, which is reasonably well-run. It is very different from LA.

Long ago I lived in San Diego, and enjoyed it very much.

From some of the things I’ve read in the last year I thought it had gone communist.

A split along a N-S line (highway 99??) would be better. That way SF,Santa Cruz and the whole SF Bay Area would be in CA. Yes, that leaves Sacramento in Jefferson, but it would not have all the voters to support the current political posture.

You are warned however, that life is different in the rural areas. Very limited public transportation and public housing. It snows here. In the colder months there is wood smoke in the air as a large percentage of folk heat with wood. Just so you know.

So it’s back to plan A. Divide the state in two. South officially handed over to the drug cartels by the corrupt politicians which would leave the north under the control of the marijuana growers.

Or, all the socialists in California could just move to Russia with Martinelli.

Russia would not allow it. There are more Marxist-Leninist true believers in California than there are in Russia.

I can’t help but look at that picture and think, “What a lousy use of cover. After the first burst of automatic weapon fire, half of their force will be chopped to pieces. Not to mention the cheap vehicles they’re using as a barrier will offer about the same protection against .50 cal as tissue paper.”

i’ve got a simple solution: everyone who wasn’t born here in #Failifornia just GTFO.

i don’t care if you’re from New Yak or Nuevo Loredo: don’t let the door hit you where the good Lord split ya!

To amateurwrangler: they can move the capitol back to Benecia.

I guess that it means that eventually we will have to burn out from LA county through Marin County on the coast when the Antifa finally formalize their rule. I guess there is not easy way.

Commies can’t do anything right. Should have known. Now we’re stuck with CA for good probably.

California Freedom Coalition
Is the new leader of Calexit
https://www.californiafreedomcoalition.com/

To the 32% of California who believes.
Please give them your full support.