“Division in Westminster will risk our ability to make a success of Brexit.” 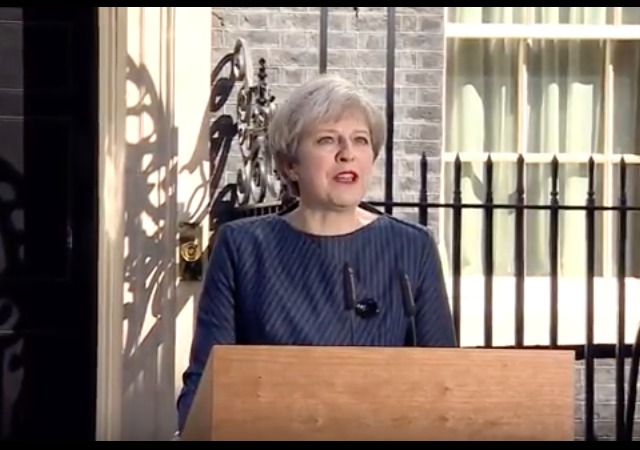 British Prime Minister Theresa May stunned many British politicians on Tuesday morning when she called for a snap election on June 8 as a way to help her negotiate through the Brexit process with the European Union.

May had said before that she would not hold a general election, but opposition from within the government over Brexit negotiations forced her hand. The London Times reported:

“The country is coming together but Westminster is not,” she said.

“Division in Westminster will risk our ability to make a success of Brexit.

“Our opponents believe because the government’s majority is so small that our resolve will weaken and that they can force us to change. They are wrong.

The Fixed-term Parliament Act requires May to receive “two-thirds majority of MPs to agree to a snap poll.” May will offer her motion to the House of Commons on Wednesday. Labour leader Jeremy Corbyn said he will support a vote. From The Guardian:

“I welcome the prime minister’s decision to give the British people the chance to vote for a government that will put the interests of the majority first. Labour will be offering the country an effective alternative to a government that has failed to rebuild the economy, delivered falling living standards and damaging cuts to our schools and NHS.

“In the last couple of weeks, Labour has set out policies that offer a clear and credible choice for the country. We look forward to showing how Labour will stand up for the people of Britain.”

Tim Farron, the Liberal Democrat leader, said the election offered opponents of Brexit a “chance to change the direction of your country”.

“Only the Liberal Democrats can prevent a Conservative majority.”

The Financial Times reported that May changed her mind after she received “advice from senior figures including Sir Lynton Crosby, mastermind of the 2015 election campaign.” Opinion polls have shown that the Conservatives have a 21 point lead over Labour, “a lead that, if translated into votes, would greatly increase the party’s existing working Commons majority of 17.” This will provide her with some leeway with Brexit negotiations.

Plus, the election will provide May with “her first opportunity to win a direct mandate to be prime minister.” She took over last year when David Cameron stepped down after the United Kingdom voted to leave the EU and her opponent dropped out of the race.

While May has the support from the opposition within Parliament, there are some on the left who have freaked out over the suggestion of holding this snap election.

Guardian writer Anne Perkins has claimed that the election is a coup and has called on parliament members to stop May from holding one:

There will be no obligation on her to reflect the views of the minority position. She will leave the remainers of England disempowered. She has made a Scottish referendum inevitable, and a border poll in Northern Ireland infinitely more likely. She is resetting politics in a way that will entrench division. We will all rue this day.

May has trashed her brand. She did that once before, with that “nasty party” speech aeons ago, in 2002. That damaged her. This will do something infinitely worse. It will damage politics, not only in the short term, but for a generation.

On the way, she is not only making a nonsense of her signature determination to treat political process with due respect, not to treat politics as a game – she has rebranded all opposition as game-playing.

But former prime minister Cameron has praised May for her decision:

Mr Cameron, who the former home secretary replaced as prime minister and Tory leader last July, tweeted: “Brave – and right – decision by PM [Theresa May]. My very best wishes to all Conservative candidates.”

London Times political reporter Henry Zeffman wrote that May wants the election so she can push through her Brexit ideas:

Mrs May said she wanted “unity” to replace “division” at Westminster, but her nascent manifesto presented her as the guardian of the 52 per cent against the forces of opposition from the recalcitrant portions of the 48 per cent.

But Mrs May’s decision is not about seeking licence to deliver a so-called hard Brexit. More likely she wants to be liberated from the clutches of hardline Conservative backbenchers who her fragile working majority of 17 forces her to rely upon.

Push that number up above 100 and Mrs May will boast an enormous personal mandate to deliver whatever form of Brexit she sees fit.

In other words they think they’re going to lose; if they thought they were going to win then they would have no objection to the holding the snap elections – so the essence of it is that they think right now they are overrepresented in the parliament for their position.

And they are right! What’s almost impossible to understand is the colossal stupidity of Jeremy Corbyn, the far left Labour leader. Since May has to get 2/3 of Parliament to agree for this election, Labour is probably strong enough to block it if they said no. BUT Corbyn’s quick agreement virtually guarantees that she’ll get the election she wants.

For those who don’t follow UK politics, Corbyn is basically their Bernie Sanders, who’s been able to take over what was a center-left party under Blair and turn it into a far left party that idolizes Stalinism. (seriously) That’s why May is so eager to take them on in an election, and why Corbyn is an idiot for agreeing. But of course he thinks the people will see the Wisdom of Socialism, so he’s all for it.

The few Labour members who are still sane know that this will be a disaster for them, but they can’t stop it.

And similarly, there are members of the Tories who would love to block it, since it will give May so much more power, but they don’t dare oppose an election which it looks like their own party will win so handily.

This is really a brilliant move by May, one of the best moves by any politician of any country I’ve seen in years. With one stroke, she is going to eviscerate not only her over political enemies in Labour, but also all of her enemies in her own party as well. Bravo!

The adoration of Stalinism is not so surprising to me. There has been a steady but hard core communist (lower c) ideology in Europe since long before WWII. Just like academics in the U.S. believe, those who see communism in the U.K so positively (and all over Europe) believe that avoiding future failure is just a matter of a few “smart” tweaks. Good thing that that ideology hasn’t caught root as aggressively within the public here. Bernie followers are not as devoted to Stalinism in my experience, for example.

I really don’t understand British politics, or any nation that has multiple parties that need to win a majority. That’s why I’m a firm believer in the two-party system. The polarization of American politics in unfortunate, but at least a party doesn’t have to abandon some of their platform to win over support from other parties.

buckeyeminuteman: You are wrong about the UK system which is in effect a two party system. Because of its “first past the post” system the winning party usually has a working majority. The Conservative Party currently has a majority of 17 and is looking to increase that. It does not rely on support from other parties to enact its legislative program. The issue is that 17 is a slim majority that lends itself to blackmail from party members. Think of how the Senate with a 51:49 party split is harder to control than with than a 58:42 split.

I believe that since the war there has only been the need for one coalition government.

Your comments are correct about other European parliaments that employ proportional representation (see the recent Dutch election).

If May can bring most of UKIP back to the Tories, and if Corbyn sticks to his neo-stalinist guns, the UK may effectively become a one-party state for the next decade or two.

If she pulls this off, she may be PM for a long, long time.

Meant to add, after her win, I hope she treats the Scots with all of the respect that any pack of whinging, layabout drunks deserve.

We really have a one party system in this country. Americans and democrats.

They’re comparing a snap election to a dictatorship. Given the events happening in Turkey right now, and the events that have been happening there since the “coup attempt”, the comparison is highly ironic to say the least.

I look forward to hearing Nigel Farage weigh in on this. He usually can be counted on for expressing a sensible, thoughtful position on issues, and I’d like to know his take on today’s announcement.

May is being true to her word, and to her constituency. Brexit WILL happen.