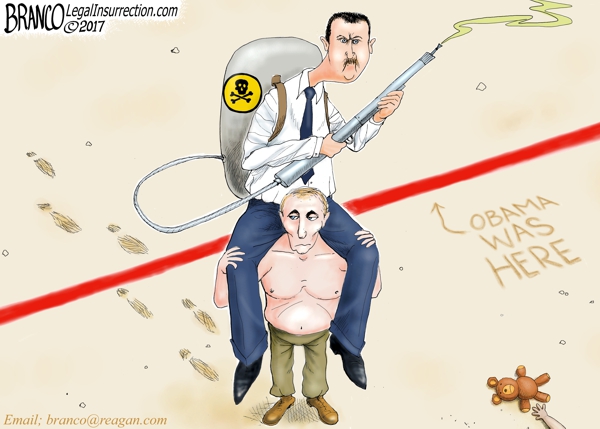 Sorry but I’m not buying the attack as being initiated by Assad. He has too much going his way right now to jeopardize it by pulling a stunt like this. Go to either Don Surber https://donsurber.blogspot.com/ or the Conservative Tree House https://theconservativetreehouse.com/ for a good perspective on this whole mess.

Another good article is https://imprimis.hillsdale.edu/ where we get a good perspective on Putin.

Sorry but I’m not buying the attack as being initiated by Assad. He has too much going his way right now to jeopardize it by pulling a stunt like this.

Assad has too much going his way to jeopardize it

That would mean he was told to do it by Russia, which would either like to set a precedent, or wants to get the war over with sooner.

It doesn’t mean he didn’t do it, because he did.

I think Israel has verified there were ony Syrian planes in the area.

Assad is not really making his own strategy or doing his own fighting.

While I enjoy your political cartoons, this attack looks like classic Isis propaganda. Add in the fact that the Isis marketing arm tweeted about a chlorine attack the day before it happened and you have to look for actual facts before making believing anything.

It just smells like a false flag setup to me. I am no admirer of Assad by any means, but he surely isn’t that stupid.

The Russian claim, that the gas released was being stored by the rebels in a warehouse/factory, are almost certainly correct.

More importantly, Bannon’s demotion and yesterday’s press conference indicate that the Trump Presidency has been captured by the neocons and that a major escalation of our many wars is about to occur, including a confrontation with Iran and/or Russia.

Assad may have done this, but do we really want to get involved? The minute that Trump does anything, the left (Ds, MSM, etc) will immediately condemn him and we’ll be seeing a repeat of Bush. They are already starting with Nunes.

I’m not saying that Assad’s forces did not do this: I am saying that we have seen stampedes like this before.

Either way, Assad is not our problem.