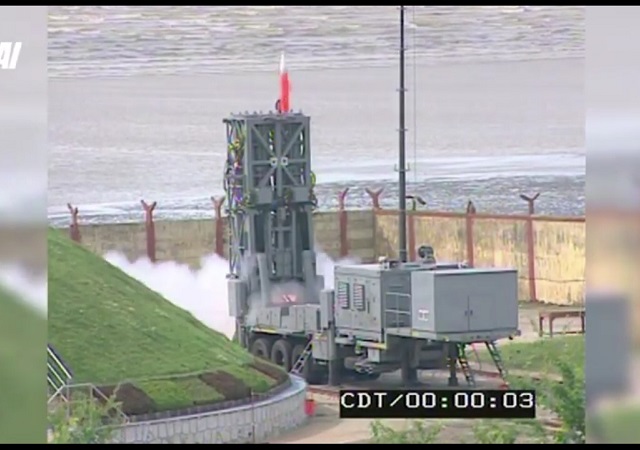 In what is being described as the largest single defense deal in Israel’s history, Israel Aerospace Industries (IAI) has secured a defense contract worth almost $2 billion from India.

Under the contract, IAI will equip the Indian Armed Forces with long and medium-range missile defense systems that have been developed through a joint Israeli-Indian partnership.

IAI has been supportive of Prime Minister Narendra Modi’s efforts to strengthen the Indian manufacturing base, also known as ‘Make in India’ initiative. “The current contracts represent an enormous expression of confidence by the Government of India in IAI’s capabilities and advanced technologies which are being developed with our local partners as part of the Indian Government’s ‘Make in India’ policy.” IAI’s CEO Yossi Weiss said.

The details of the deal were revealed by Israel Aerospace Industries (IAI) on Thursday in a Press Release:

Israel Aerospace Industries (IAI) announced today that the company has been awarded contracts in India totaling almost $2.0 billion. In a mega-contract worth over $1.6 billion, considered to be the largest defense contract in Israel’s Defense Industries’ history, IAI will provide an advanced MRSAM [medium-range] air & missile defense systems to the Indian Army.

MRSAM is an advanced ground breaking air and missile defense system that provides the ultimate protection against a variety of aerial threats. In its existing version, MRSAM is operational with the Indian Air Force, Indian Navy and Israel Defense Forces. The system includes an advanced phased-array radar, command and control, mobile launchers and missiles with advanced RF seekers. MRSAM was developed jointly for the Indian Army by IAI and India’s Defense Research and Development Organization (DRDO) in collaboration with RAFAEL and IAI/Elta, and worked with various Indian companies including BEL, L&T, BDL and other private vendors.

Israel-India relations have come a long way since the two nations established diplomatic relations in 1992. Bilateral trade between India and Israel has grown from $200 million in early 1990s to nearly $5 billion in 2016. Today, both countries are cooperating in areas ranging from agriculture to space exploration, and from rural healthcare to advance cancer research.

Russia still takes an impressive share of India’s defense imports, primarily upgrading the country’s Soviet era hardware. However, when it comes to weapon electronics, developing new defense systems or upgrading the existing ones, Israel is the preferred choice of Indian military planners. In the last decade, Israel has secured defense deals worth more than $12 billion, making India its largest customer of defense supplies.

Socialist planning and nationalisation of domestic industry depleted India’s manufacturing base. During the lost years of the Cold War, India heavily depended on Soviet arms imports. It has been over 25 years since the end of the Cold War, India still imports more than 60 percent of its defense requirements.

Prime Minister Modi hopes to decrease India’s dependence on foreign suppliers by promoting joint R&D programmes, technology transfer and expanding domestic manufacturing base. Israel’s IAI and Rafael Advanced Defense Systems are among the leading foreign defense manufactures to avail the provisions of Make in India initiative — teaming up with Indian partners in public and private sectors, and setting up manufacturing units in India.

In July, Prime Minister Modi will embark on a state visit to Israel, highlighting the importance of this growing partnership — first ever such visit by a sitting premier of the country. Israeli Prime Minister Benjamin Netanyahu has also received an invitation to visit New Delhi.

We need to realign our alliances. We need to get rid of Pakistan, which sends our defense assistance dollars that’s supposed to go to fighting terrorists to the terrorists. And we need to replace Pakistan with India.

Even if Pakistan were a willing ally, it’s no where near as strategically placed as India, which is in the right spot to be not only a bulwark against Islamic terrorism but Chinese encroachment into the IO.

And Pakistan is not only NOT a willing ally, it is in no sense an ally at all.

notamemberofanyorganizedpolicital in reply to Arminius. | April 7, 2017 at 2:32 pm

I’ve read that the only real reason that we were at odds with India in decades past was because the Arabists in Eisenhower’s State Dep’t decided to side with Pakistan, and on their request turned down India’s request for a weapons system purchase. So, quite naturally, the Russians were eager to jump into the gap and become their military supply depot, but it was our fault that it ever happened.

India and the US have always had a great deal in common, and should ALWAYS have been close allies. It’s about 60 years later than it should have been, but hopefully it will finally happen.

If you don’t mind, Tom, I’ll just ignore your first paragraph and concur entirely with your second.