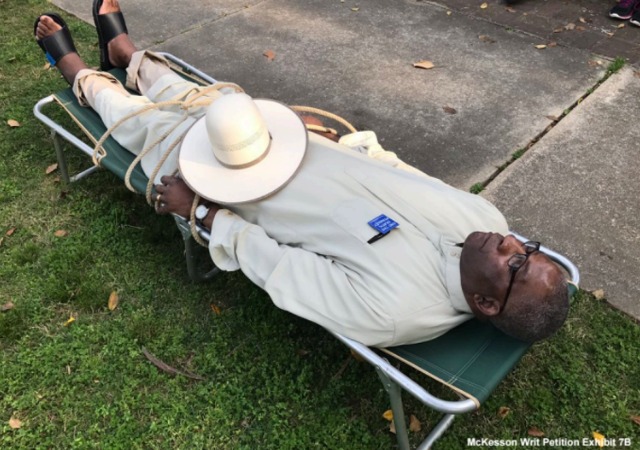 Arkansas Judge Wendell Griffen decided to participate in a death penalty protest only two days after he blocked executions. This has led officials to believe he cannot be impartial when it comes to death penalty cases. From The Washington Times:

She said Mr. Griffen attended a 2 p.m. Friday rally at the state capitol in Little Rock before issuing the temporary restraining order at about 4:25 p.m., then resurfaced at an evening protest outside the governor’s mansion.

“Within an hour of granting the TRO [temporary restraining order], Judge Griffen was photographed at a second anti-death penalty rally — this one at the Governor’s Mansion, where Judge Griffen lay strapped down to a cot to simulate the experience of a condemned prisoner on a gurney,” said the petition. “Judge Griffen was protesting the very executions he had just enjoined.”

The judge also spoke out against the executions in a blog post earlier this month, saying that “Arkansas officials plan to commit a series of homicides,”according to the petition.

The order issued by Judge Griffen placed a hold on Arkansas Gov. Asa Hutchinson’s unprecedented execution timetable, under which eight men were slated to be put to death in 11 days before the April 30 expiration of a key drug used in the state’s lethal-injection protocol.

After RBG what should we expect of judges? He needs to get a job as a Walmart greeter and leave the serous work for others/

He should be removed from the bench and disbarred, plain and simple. Also, the Governor should enact the last clause of the lethal injection law that was put in place in the past couple of years. The final clause basically says that if any “court, judge, or government entity should find Arkansas Lethal Injection procedure invalid then we will immediately revert to the use of the Electric Chair. So just keep going and fire up ole’ sparky, I’ll come flip the switch.

Section 2 (k) The department shall carry out the sentence of death by electrocution if execution by lethal injection under this section is invalidated by a final and unappealable court order.

If this isn’t a flagrant violation of at least two rules of the Arkansas Code of Judicial Conduct I don’t know what could be.