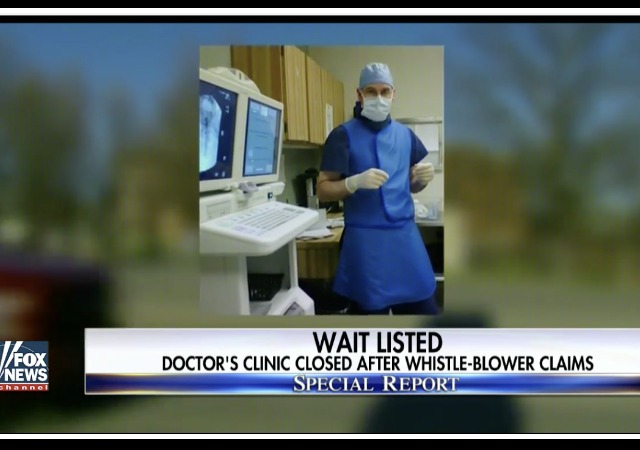 Fox News has reported that another doctor has claimed the Department of Veterans Affairs (VA) has retaliated against him after he revealed wrongdoings at the hospital for which he works.

Dr. Dale Klein “works” at the Southeast Missouri John J. Pershing VA in Poplar Bluff, MO, but that work consists of staring at a blank wall all day because as he told the inspector general there are “secret wait-lists and wait-time manipulation” at the VA.

Klein makes $250,000 a year as a “double board certified physician and Yale University fellow.” He loved helping veterans, but when he noticed those wait lists, wait-time manipulations, and that some veterans sold their medications to others, he spoke to his superiors.

Those superiors did nothing, but Klein knew something had to be done. So he spoke to the inspector general. He told Fox News that the VA started its retaliation against him almost immediately:

Klein was initially placed on administrative leave. The Missouri-V.A. closed his pain management clinic and tried to terminate him. According to court documents, the V.A. tried to fire Klein “not based on substandard care or lack of clinical competence” but instead for “consistent acceleration of trivial matters through his chain of command.”

“I do not consider secret wait-lists and manipulations of wait times to be trivial matters,” Klein said.

How dare Klein try to provide the best possible care for those who deserve it the most!

But since the Office of Special Counsel pointed out Klein is a whistleblower, the VA could not fire him. So they decided to make his life miserable and deny the veterans the care he could provide them:

“It could set a bad precedent for other whistleblowers because they’re going to say, ‘I don’t want to risk my livelihood, my career, my security because I see what happened to Dr. Klein and I don’t want that to happen to me or my family’,” said Natalie Khawam, president and founder of the Whistleblower Law Firm, which represents Klein.

Senate Homeland Security and Government Committee Chair Ron Johnson (R-WI) has tried to step in for Klein. He wrote the VA and asked the department to “cease all retaliatory action” and has grown “concerned about a doctor who could be utilizing his skills to help veterans, but who is not able to utilize those skills.”

After I came across the Fox article, I decided to Google VA whistleblowers, and you would not believe the stories I found. But is anyone really shocked? I’m not.

In May 2014, a whistleblower took the nation by storm when he spilled that at least 1,400 veterans “languished without care” at the hospital and even more went without appointments for two years. At least 215 veterans died because of these actions.

Well, it turns out that the VA retaliated against him and others:

Now, the whistleblower who alerted the OSC to these alarming numbers tells NBC News that he believes his desire to save veterans’ lives came with a price: the VA retaliated against him with harassment, insurmountable work tasks and by placing him under surveillance and investigation for not solving the scheduling problem the VA created.

“As an Iraq veteran, it makes me feel like dirt that bureaucratic civilians who’ve never served this country are abusing vets like me, and killing vets who have are defenseless because they’re ill,” said Kuauhtemoc Rodriguez, a scheduling manager for the Phoenix VA’s specialty care. “They know the price of freedom and the VA abuses that, and benefits off the backs of veterans.”

Denver, CO, VA Facilities
Last November, Department of VA employee Brian Smothers resigned due to the retaliation he faced after he reported “the agency was using unauthorized wait lists for mental health care in Colorado.” The VA actually “opened two separate inquiries into his actions and tried to get him to sign a statement saying he had broken VA rules.” He refused to sign and faced backlash:

Smothers also said the VA reassigned him to an office with no computer access, no significant duties and no social contact.

He called the VA’s actions punitive and his working conditions intolerable. He said he resigned as of Tuesday.

VA officials had no immediate comment on Smothers’ claim that he was punished for speaking up but said the agency does not tolerate retaliation. They said previously they take any allegation about unauthorized wait lists seriously and were cooperating with an inquiry.

Smothers alleges that Colorado VA facilities in Denver and suburban Golden used unauthorized wait lists for mental health services from 2012 until last September. He said the lists hid how long it takes for veterans to get treatment and made the demand for mental health care appear lower than it really was.

He said the longer that veterans have to wait for mental healthcare, the less likely they are to use it when it becomes available.

and with a priority *behind* any and all vets.

betcha schisse would get fixed *real* fast then…

i complained about my primary care, and requested a new one: the new one tried to “punish” me through the system, apparently for daring question a peer.

he’s already regretting that, as i speak fluent “healthcare” and know where the levers of power are and how to operate them.

if i told the Division CSM to f-off, i damn sure don’t care about some punk a55 doctor.

If congress was waiting in line behind vets we should slow down the care giving.

In the Washington culture the only gummint employees who are ever punished for their “wrong doing” are whistle blowers.

I like redc1c4 idea but I would go a step further and make ALL Grubernment Employees and their family members use the VA and give Veterans priority over civilians!

As word gets out about the level of care post military service; what if the services acquire all of the latest and newest equipment, but no one to operate it? VA disfunction is a matter of national security.

I’ve always thanked Heaven that my husband’s disability rating is low enough to be essentially nil (some hearing loss) so he isn’t trapped into using the VA system. The nearest one is an hour away to begin with, and Tricare standard having not changed much (unlike all the other insurances) is now one which most docs want to take rather than avoid like the plague. I’m just worried about the “Tricare for Life” when he hits 65 and gets stuck with Medicare as a primary insurance. A lot of the docs around here will NOT take Medicare.

Recently a Vietnam veteran friend went through the VA system’s rationed care……..here is a shortened version of his suffering – all 100% true (and yes, he passed away from this):

Diagnosed with depression – given multiple anti-depressants, after MONTHS of waiting, with nothing diagnosed.

Diagnosed to need triple by-pass surgery; had testing done at NIH and they determined he needed QUADRUPLE by-pass surgery – he goes back to VA hospital to schedule surgery, saying “oopsie! our mistake!! you don’t really need ANY heart surgery at all!! here are your 10+ meds….”

Diabetic (due to Agent Orange exposure), gets cellulitus, then a deep infection on the sole of his foot, has mobility issues, shaking due to meds, depression deepens – dr. wraps up the foot, sends him home. Two days later he’s in the ER with septis, and dies of a heart attack after coding FOUR times.

That is MEDICAL MALPRACTICE, and what the Democrats want ALL of our healthcare system to be like.

After two years of not being seen, I had my first appointment two days before the inauguration. Since then I’ve done two years worth of appointments in two months. Go figure.