Ethics Committee found probable cause that the governor used state resources to hide his affair. 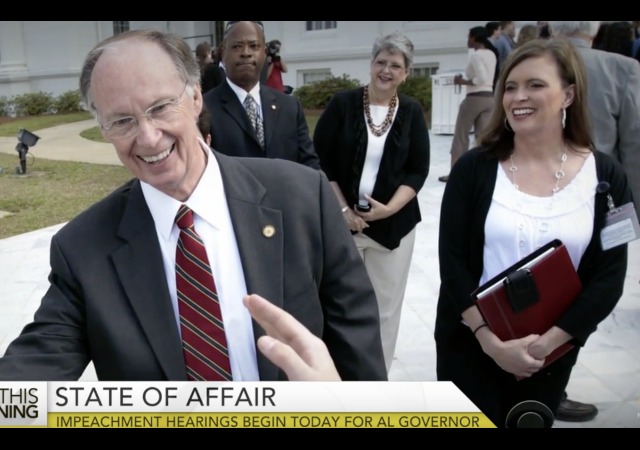 Bentley stepped down as part of a plea deal that saw him admit to two misdemeanor campaign and ethics charges. The 74-year-old grandfather of six was given a 30-day suspended jail sentence and a year of probation. The agreement includes provisions that Bentley not seek elected office again, that he repay campaign funds totaling $36,912 within a week and perform 100 hours of community service as a physician.

The Hill reported that Bentley and his wife divorced “after she recorded sexually suggestive phone conversations between” him and Caldwell back in 2015. Last week, Alabama’s Ethics Commission “found probably cause that Bentley had broken state rules” in an effort to conceal the affair.

Back in 2014, Bentley’s wife Dianne discovered text messaged between him and Caldwell “on his state-issued iPad” since he had given her the device. Dianne divorced him in 2015, but he could not shake off the scandal after the texts and messages leaked.

The Alabama Ethics Committee received complaints that that Bentley “misused state resources to facilitate his affair.” The committee released its report last week, which stated the investigators “found probably cause that Bentley had broken state rules.” From CBS News:

Sharman’s report accused Bentley of ordering “the state law enforcement secretary and his state security officer to try and track down the recordings.” Ray Lewis, Bentley’s former protection detail leader, testified that the governor “directed him to meet with his son and tried to obtain the recordings.” His wife’s former chief of staff also testified “that Bentley threatened her job because he believed she had helped his wife make the recordings.”

Lewis filed a lawsuit against Bentley in November, claiming that the fiasco damaged his career and reputation. CBS News reported:

Lewis said he was ostracized and eventually forced out from his job after pushing the governor and Mason to end their affair and warning Bentley about using state planes and cars to transport Mason.

“He would have done anything for the Governor, including taking a bullet. But when you are the head of the Governor’s security detail, you see a lot, hear a lot, know a lot. And there came a time when both Governor Bentley and Rebekah Mason wanted Ray Lewis gone,” John Saxon, a lawyer representing Lewis said in an emailed statement.

Bentley acknowledged his mistakes, but has denied doing anything illegal. From CBS News:

“If the people want to know if I misused state resources, the answer is simply no. I have not,” Bentley said in a Friday statement on the marble steps of the Capitol. He asked for unnamed people who he said were taking joy in exposing the embarrassing details of his personal life to stop.

House Judiciary Chairman Mike Jones started the impeachment hearings, stating that “it was time to hear evidence collected by the committee’s special counsel.” From Fox19:

The top lawyer in an impeachment investigation says Alabama Gov. Robert Bentley did not cooperate with the probe.

Special counsel Jack Sharman said Monday there was a question of the governor’s “candor.” Bentley is accused of misusing state resources to keep an alleged affair with a staffer from being exposed.

Rumors floated this morning that Bentley may resign this week. Sources close to the situation have told the media that his lawyers have started “negotiations to step down from the governorship and plead to lesser chargers, allowing Lt. Gov. Kay Ivey to step up as governor.”

His spokeswoman Yasamie August told reporters that Bentley “is not personally involved in any negotiations.”

Those around Bentley have demanded the governor step down. These former allies include “House Speaker Mac McCutcheon and Senate President Pro Tem Del Marsh.” The Alabama Republican Party also told Bentley to step down on Sunday.

The state will swear in Ivey today, making her the second female governor of Alabama.

Too bad — if he were a democrat he could be the front runner for 2020.

Not to mention he would get a lot of cover and maybe even attacks on accusers if he were D. I’m glad he is under pressure to resign. Just another distinction between parties.

How can you say that? Don’t you know it all depends on what the meaning of “is” is?

Ha. The biggest irony, this guy said he could not vote for Trump because of his remarks that women allow certain sexual liberties to the upper crust.

Did the governor refuse to have sex?

That’s the only sex scandal with the Democrats…..