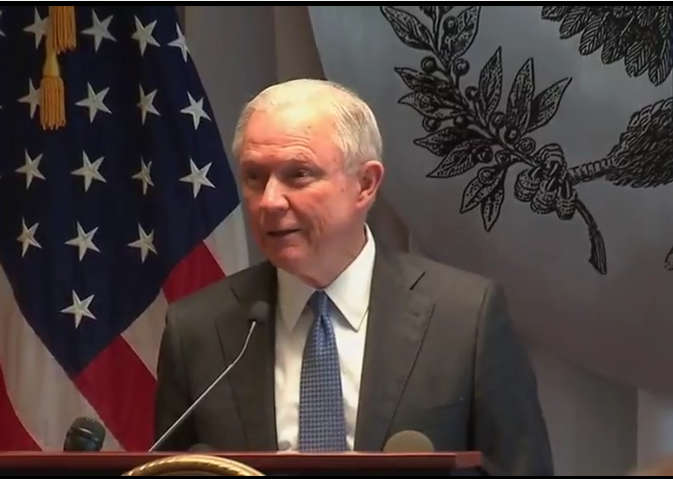 Attorney General Jeff Sessions held a press conference in Long Island, New Jersey in which he addressed gang violence.  He directly addressed the brutal and growing barbarism of the MS-13 gang, stating that in the Trump era the violent grip this gang has on Long Island, in particular, is unacceptable and will be stamped out.

MS-13 is a Salvadoran gang that has established roots across America and is touted as “the gang that scares other gangs.”

They’re known as MS-13, MS, Mara or Mara Salvatrucha, but by any name, they’re trouble.

MS-13 is a Central American gang founded in Los Angeles in the 1980s by Salvadoran immigrants. While still heavily represented in California, they have spread across the nation—into at least 42 states and Washington, D.C.– and beyond, especially into Central America.

. . . .  One anonymous member of the gang, who has since gone straight after spending time behind bars, explained the group’s appeal in an interview with News 12 Long Island.

Long Island has become so infested with and terrorized by this gang, living in fear of its murderous rampages, that its suburbs have been said to be “gripped” in MS-13’s violence.

MS-13 has been blamed for a trail of 11 corpses of mostly young people discovered in woods and vacant lots in Brentwood and neighboring Central Islip since the start of the school year.

The bloodshed in the blue-collar towns has gotten the attention of President Donald Trump, who says it’s the result of lax immigration policies that let too many criminal “scum” slip through.

. . . . Since the fall of 2013, the U.S. has placed 165,000 unaccompanied minors. Long Island has been a frequent landing spot. Suffolk County, which includes Brentwood and Central Islip, has gotten 4,500. Neighboring Nassau County has received 3,800.

. . . .  In a recent roundup of 13 MS-13 gang suspects accused of murder and other crimes, seven had entered as unaccompanied minors.

MS-13 is recruiting the unaccompanied children, Suffolk County police Commissioner Timothy Sini said. The youngsters, he said, “don’t have an established social network, at least many of them don’t, and MS-13 is providing that network.”

So horrific is this gang, that they have—without hyperbole—been referred to as “more dangerous than ISIS.”

“The MS-13 motto is kill, rape and control,” Mr. Sessions said at the United States Courthouse here. “Our motto is justice for victims and consequences for criminals. That’s how simple it is. Prosecute them, and after they’ve been convicted, if they’re not here lawfully, they’re going to be deported.”

Mr. Sessions talked tough, declaring that “this is the Trump era,” when the federal government would back law enforcement. He said that he would add prosecutors to the Eastern District of New York. On Wednesday, Gov. Andrew M. Cuomo of New York had come to the area to announce that he would add 25 State Police officers to the gang-fighting efforts.

The NYT, of course, cannot refrain from trotting out the tired talking point that enforcing laws in neighborhoods replete with illegal aliens is somehow counterproductive.   AG Sessions has little time for this line of attack.

Mr. Sessions did not, however, offer assurances to the sizable immigrant community that its members could report crime to the police without worrying about their immigration status.

He said that prosecuting immigrants who had entered the country illegally and committed crimes was still the federal government’s priority, and that the government was not “out seeking witnesses to crimes to deport.” But he added, “It cannot be that the attorney general grants immunity contrary to law for people who violate the laws of the United States.”

In light of the terror that MS-13 instills wherever it is active, this sort of resistance to eradicating it is appalling.

For example, CNN asks if cracking down on hyper-violent gangs composed almost exclusively of illegal aliens is a good idea.

But the truth about the gang, the first street gang to be labeled a “transnational criminal organization” by the US government, is more complicated — and experts say using MS-13 to justify cracking down on undocumented immigrants could actually make the gang stronger.

. . . . As part of its heightened rhetoric against illegal immigration, the Trump administration of late has spotlighted MS-13 as a sort of public enemy No. 1.

“The weak illegal immigration policies of the Obama Admin. allowed bad MS 13 gangs to form in cities across U.S. We are removing them fast!” Trump tweeted earlier this month.

Unsurprisingly, CNN posits the fact that MS-13’s victims are most often other illegal aliens as a reason (and you can’t make this up) for not pursuing the gang members guilty of the most horrendous crimes.

“Undocumented immigrants are more likely, generally, to be the victim of gang crime to be a member of the gang,” Liquorie said.

Undocumented immigrants are especially vulnerable, he said. They tend to lack stable family or work in their communities, are often paid in cash, and can fear reporting crimes to the police for fear of deportation. MS-13 preys on that vulnerability, targeting immigrants for extortion and manipulating minors into joining their ranks.

The Trump administration’s rhetoric and aggressiveness toward undocumented immigrants can help drive that, Liquorie said.

This is the same argument we hear from regressive immigration attorneys like Patrick Young who was among the protestors against AG Sessions in Long Island.

Patrick Young was one of the protesters who gathered on Long Island Friday to protest Attorney General Jeff Sessions as he delivered remarks to law enforcement on gang violence.

Sessions said he plans to eradicate the violent MS-13 gang by cracking down on illegal immigration.

Young argued that the proper way to fight MS-13 is to have the immigrant community work with law enforcement, and that won’t happen if Sessions and Immigration and Customs Enforcement (ICE) get involved.

He said if we “stigmatize” all immigrants – legal or illegal – it only makes those communities and all Americans less safe.

Tucker pointed out that 92 percent of MS-13 members are illegal immigrants, so it’s simply false to argue that immigration has nothing to do with the gang.

“I’m not blaming all immigrants,” Tucker said. “I’m merely saying we wouldn’t have this problem in the first place if these people weren’t here. They don’t have a right to be here, they’re here illegally, and in this case – in the case of MS-13 – they’re murdering people!”

He added that the Obama administration certainly did not “stigmatize” immigrants over the past eight years, yet MS-13 grew during that period.

Young insisted that we must work together to oppose MS-13, and we won’t make progress against the gang if communities are divided.

If you have time, the following documentary on MS-13 is well worth watching.

It is a good thing that the peasantry of New York is disarmed by law. If they had guns there might be REAL violence!

Remember that to Democrats no illegal alien is an illegal criminal.

CNN’s typical Democrat Media logic – doing anything to fight a problem will make it worse – so do nothing. Yeah, we had eight years of that.