It should have been the war to end all wars…. 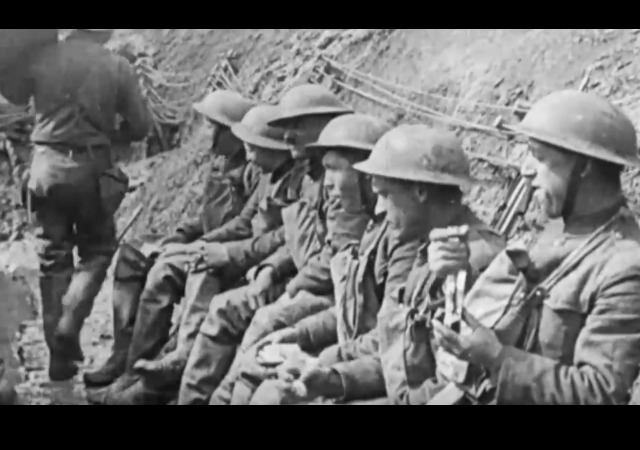 On April 6, 1917, the U.S. House of Representatives voted to enter World War I, 373-50, almost three years after the war began. President Woodrow Wilson vowed American neutrality, but that all changed due to Germany’s submarine warfare. Wilson admitted America’s tactic did not work:

“With a profound sense of the solemn and even tragical character of the step I am taking and of the grave responsibilities which it involves, but in unhesitating obedience to what I deem my constitutional duty,” he said.

“I advise that the Congress declare the recent course of the Imperial German Government to be in fact nothing less than war against the government and people of the United States; that it formally accept the status of belligerent which has thus been thrust upon it, and that it take immediate steps not only to put the country in a more thorough state of defense but also to exert all its power and employ all its resources to bring the Government of the German Empire to terms and end the war.”

Wilson ran for a second term, basing his platform on the fact that he kept America out of the war that raged across Europe. But as I mentioned above, situations occurred that made it impossible. For example, a German U-boat sunk the RMS Lusitania in 1915, killing 125 Americans and launched national outrage across the states. Germany pledged not to attack passenger ships, but Kaiser William II quickly changed his mind. Germany resumed attacks on those passenger ships.

However, the Zimmerman Telegram became the tipping point:

But this was not the tipping point. That would ultimately be the Zimmerman Telegram. In February 1917, British intelligence picked up a telegram from German Foreign Minister Arthur Zimmerman intended for Mexico, hoping to entice them to attack the United States. The British forwarded this to Wilson, and the press got wind of it a week later. The telegram was published, and public opinion flipped in favor of entering the war.

How American Participation Changed the War

With propaganda, the U.S. managed to save energy and food to send to the soldiers:

The entire American economy was mobilized to win the war. From planting extra vegetables to keeping the furnace turned off, American civilians provided extra food and fuel to the war effort. The United States government engaged in a massive propaganda campaign to raise troops and money. Where dissent was apparent, it was stifled, prompting many to question whether American civil liberties were in jeopardy.

Right before America joined, the Allies began to fall apart. Russia faced a revolution in February 1917 that forced Tsar Nicholas II to abdicate and saw the rise of the Communists. British and French forces could not fill in the holes left by the fallen soldiers. The Allies needed the Americans. The U.S. government established the Selective Service Act in 1917, which brought in 2.8 million men and 10,000 arrived in Europe every day. So while the Allies replaced their losses, the Germans could not:

America’s entry into the war had a significant impact overseas, according to Cleveland historian George Vourlojianis, whose grandfathers served in the Greek army and navy during the war.

The historian noted that by 1917, the war had become a stalemate in the trenches.

“In the face of machine guns and repeating howitzers and poison gas, they (the Allies) had bled themselves to the point where there was no more to give,” he said. “The Germans were facing the same thing.”

The U.S. provided a needed infusion of fresh blood in the form of troops and material, helping bring the war to an Allied victory in November 1918.

But nothing is more important than testimonies from those who served during WWI. Unfortunately, the last U.S. WWI veteran passed away in 2011 at the age of 110. Frank Buckles “served as a U.S. Army ambulance driver in Europe during what was then known as the ‘Great War,’ rose to the rank of corporal before the war ended.”

Richard Rubin penned The Last of the Doughboys: The Forgotten Generation and Their Forgotten World War after he spent a decade to document stories from the soldiers. Slate published one story from William J. Lake, private from the Army’s 91st Division:

As he said time and again 85 years later, Bill Lake was lucky. He was not among the thousands of casualties the Wild West Division took. The Germans sure did try to include him, though. Like artillery, machine guns were high-priority targets for the enemy because of the damage they did. (“That machine gun was a wicked gun, that machine gun,” Pvt. Lake recalled. “Oh, man.”) But there are only a few ways to silence a machine gun, since you can’t really assault them directly without exposing yourself to their terrible fire. One is to hit them with artillery; for that you have to know exactly where they are, and you have to be able to hit them quickly enough that they can’t just scuttle away once they figure out what you’re up to. Another way is to crawl up on their flanks undetected—and already you’re getting into a high level of difficulty, as machine gun nests were often well-protected—and blow them up with grenades. Or, finally, you could kill the guys who run back and forth between the machine gun and its supply depot, fetching ammunition.

Sgt. Arnold S. Hoke taped his experiences, in which he apologized for the dark material because “[T]here’s nothing pleasant about war.” From The Washington Post:

One doughboy, a man he had recruited from Atlantic, Iowa, said he figured he would be wounded, lose a leg, and meet his comrades at the train station. “I’ll get back home before you guys,” he told his buddies.

He’d have a hollow artificial leg, fill it with whiskey, and pass it around so all the boys could have a drink.

As Hoke rested in the farmhouse that day, German artillery had zeroed in on the trees where his comrades were eating.

“They threw a salvo of shells into this woods,” he said. “And they caught our men all lined up waiting for their chow.”

Fifteen to 20 men were killed, and about 30 were wounded, he remembered, including the man from Atlantic.

One of his legs had been practically blown off, Hoke recalled, and was just hanging by a few ligaments. He was conscious as he lay on the ground, and didn’t seem to be in a lot of pain.

But nothing speaks louder than pictures.

On this day exactly 100 years ago, the US entered into #WWI. This old @ParamountPics newsreel from 1937 captures the sentiment. pic.twitter.com/vcB5QR93Wp

Photos from World War I: The 91st "Wild West" Division made up of soldiers from California and other Western states https://t.co/mLisVOyTpo pic.twitter.com/h2YqhN2rnO

100 Years Ago, the United States Entered World War I – 40 photos from a century ago, in the U.S. and overseas. https://t.co/eKQkZYI8R2 pic.twitter.com/Frn7n25Vzy

100 years ago, U.S. Congress voted to declare war on Germany and brought America into #WWI. Do you know the 3 main reasons why? pic.twitter.com/DvMhizPQrW

WWI and WWII… two wars … two different outcomes after the wars…. Versailles versus The Marshal Plan. One begat war, the other begat peace.

Thanks for all of the work the author put into this. Most other pages / blogs would just write a quick note mentioning the day, if they did anything at all.

Several years ago I watched “The First World War”, a ten part Channel Four (UK) series based on the book by Hew Strachan, and I highly recommend it, especially for its photographs, newsreels, and first person accounts.

One thing that really stood out was how much the world changed in just those few years, and how so many of the geopolitical issues of the 20th and even 21st century have their roots in that period. If more Americans studied WWI, WWII, and then the Cold War in high school or college, I think that the positive impact on the world would be significant.

You are so welcome and thank you for the kind words! 🙂

First shots were fired on Guam.