WATCH: Why Isn’t There a Palestinian State?

WATCH: Why Isn’t There a Palestinian State?

Why don’t the Palestinians have their own country? Is it the fault of Israel? 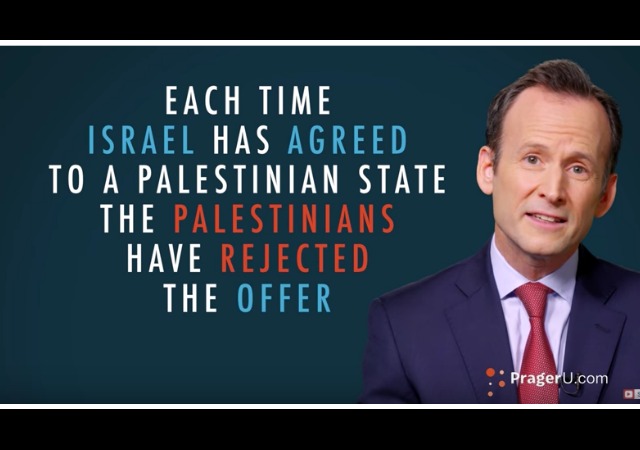 It’s 2017. Shouldn’t there be a Palestinian state by now?

On five different occasions, Israel offered Palestinians their own state. Israel has accepted each proposal, but their offers are continually rejected. Brog suggests instead of applying pressure to Israel, pressing Palestinians to accept a Jewish State might be a better course.

The Palestinians will never accept a “two-state solution” for several reasons, but two big ones come immediately to mind.

#1: The Palestinians are still operating under the mindset that the Jewish people must be exterminated, and to do so is a holy act, not murder. They will not accept any solution that allows a Jewish state, no matter how sweet the deal is.

#2: Palestine, according to the U.N.’s “official” record, is a territory — usually, a territory “occupied” by Israel. They are not a “state”, a sovereign nation. Given their hatred and lasting violence toward Israel, it is simply not in their best interest to become an independent state.

If Palestine were an independent state, Israel could declare war on them and the U.N. would have to back off from the local, private dispute between fellow-member states. If any such conflict turned violent, I don’t have any doubts Israel would win, and decidedly so. (I’d give it a week, two at the most; we are, after all, talking about a nation the size of New Jersey that emerged victorious from a war in which four independent neighboring nations tried to exterminate them.)

By maintaining its “status” as an occupied territory, Palestine enjoys the support and charity of the U.N., and they are free to continue their attacks on Israel. That would all end the second they became a recognized state.

Nice recap by Prager U! Of course, none of the Progs will believe it.

There IS a “Palestinian” state, one that has existed for nearly 100 years. The British divided the Palestinian Mandate and gave the bulk of it particularly to the Arabs as the Kingdom of Jordan in 1921.

This was my understanding too. The intent of the British was that Jordan (Transjordan?) was to be the Arab state and Israel the Jewish state.

Also, Israel is a part of Palestine in the same way that Norway is a part of Scandinavia. Palestine is the name of a geographic region, not a specific country or people.