WaPo’s Ignatius: 300 Possible Terrorists Travel Ban Would Have Stopped is a ‘Tiny Number’

WaPo’s Ignatius: 300 Possible Terrorists Travel Ban Would Have Stopped is a ‘Tiny Number’

How many terrorists and terrorist attacks in the US are acceptable to David Ignatius? 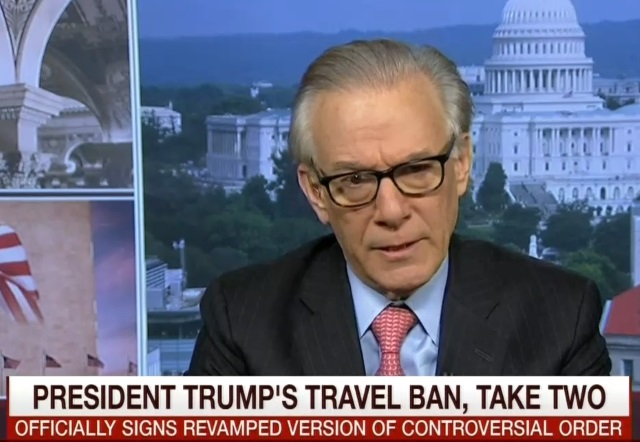 For David Ignatius, what is an acceptable number of terrorists and terrorist attacks in the United States? The question arises because on today’s Morning Joe, Ignatius, of the Washington Post, was discussing the Trump admin statement that since 9/11, 300 people admitted from countries on the reissued executive order have been subject to “criminal, counter-terrorism investigations.”

Sniffed Ignatius: that’s a “tiny number.” Really? If those 300 had not been caught up in counter-terrorism investigations, how many would have carried out terrorist attacks? If only 1-in-20 had, that would be 15 terrorist attacks. Fifteen San Bernadinos, Pulses. Even one. Tiny?

The discussion began with a clip of Chuck Schumer claiming the revised order makes us “less safe, not safer.”

CHUCK SCHUMER: The truth is, there is very little new or improved about this executive order. It’s barely a fresh coat of paint on the same car that doesn’t drive. It’s still a travel ban. It’s still a refugee ban. It still makes us less safe, not safer.

MIKA BRZEZINSKI: David Ignatius, how does this make us safer, if you could explain the ban to us.

DAVID IGNATIUS: . . . There’s an assertion that 300 refugees have been a subject of criminal counter-terrorism investigations. So see, here’s the threat as people have looked at those numbers, they’ve noted that 300 people is, by one count, 1/15 of 1% of the refugees who have come since 9/11 from the six countries that are subject to this ban. So it’s a tiny number.

Just as they voter fraud counterargument starts with “no proof of even one” continually slips to say the 5, then 22, then 100, etc, found are not significant enough to disenfranchise minority voters blah blah, so will the travel ban counterargument evolve.

The left is often worried about the rights of the wrong people. In this case it is non citizen refugees. They have rights and should be given some sort of help or consideration. But citizen rights come first. But not to them.

Ignat is certain that none of these infiltrators will ever end up in his gated estate, and they won’t do anything to bother any of his personal friends either, since they all have well-heeled private security services.

So why should he worry about it? To him the concerns of those whining peasants truly are trivial.

Yes, he’s like Obama, who will live in gated mansions and be surrounded 24/7 by armed Secret Service agents for the rest of his sorry life, telling the rest of us that the the U.S. “can easily absorb” more Islamic terrorist attacks.

They know that they and theirs will be protected, so they are more than willing to sacrifice other peoples’ lives in service of their faux-virtue signalling.

I can’t seem to remember. How many insufficiently-vetted visas did it take to allow 9/11 to happen?

Precisely. On 9/11, a mere 19 improperly vetted hijackers managed to kill over 3000 people. As has been repeatedly shown in both Europe and the Middle East, just one terrorist driving a truck can create hundreds of dead and injured–with or without explosives.

To say David Ignatius is a special kind of stupid would be understating things.

If I remember correctly, there was even some warning by flight schools about people only wanting to learn how to fly a plane and not necessarily land a plane.

We didn’t “connect the dots” then so I have to wonder if we are able to connect the all of the dots now?

Connecting the dots is racist, bigoted, and Islamophobic.

That’s why every time some Muhammad or Achmed starts shooting people while shouting “Allahu Akbar” after posting to Facebook that they a planning a Jihad attack for Allah and swearing loyalty to the Islamic state, the police just can’t divine a motive.

wonder if they would be as condescending if a member of their family was killed or injured by a terrorist attack.

“If this saves the life of just ONE chile…”

How often are we treated to that “argument”? Everyone killed by a jihadist in the US was a child at one time or another.

And it isn’t the body-count that matters. It is the intent and the effect on our society.

We do rational, measured security measures partly to prevent the urge to do much more draconian ones.

If only 1% of them succeed at killing numerous people, that would be three incidents of mass murder. That’s just a tiny number. Proceed with your self-inflicted genocide, Infidels!

And remember, to Ignat and his party, even one instance of mass murder is considered sufficient justification to override the constitution and confiscate all firearms in the country.

Is Ignatius the root of Ignorant? Open your doors David we’ll send’em to your house.

Spoke like a guy who lives in a gated community.

And thinks everyone on the outside is stupid.

This is how a large herd of wild animals deals with predators. Let them feed on the edges, old, slow animals will be taken. The herd can live on.

So we could execute 3000 libs a years without there being a problem. Hmmm! Maybe we could even bump the number up to 6000, we have enough illegals to replace their numbers.

notamemberofanyorganizedpolicital | March 7, 2017 at 9:36 am

BUT NO ONE, NO ONE, Believes Jeff Belzo’s WaPo or WaPo’s Ignatius. Absolutely no one!

Maybe if jihad comes to the NYT or WAPO offices things would change. Would they call it workplace violence and plead understanding for the poor oppressed jihadis?

Let’s see now….”Je suis NYT” or “Je suis WaPo”… just about right and having the same effect.. Nada. How soon they forget 9/11…even in NYC. Forget the “Stockholm Syndrime”…. it’s now the “New York Syndrome”…

Wow! Can anyone imagine if a Republican said this? I wonder what his answer would be if he was looking at a bowl of M&M’s and was told that only 1% of them were poison. How many would he eat or would he eat any?

I found this chart from the Kerry state department website –
https://2009-2017.state.gov/j/prm/releases/statistics/index.htm And, I added up the number of refugees from those countries from FY2007-FY2015 and came up with 85,302.

He mentioned the time period 2001-now but I don’t see making up the large difference during the other six years. But, he could have been including legal immigrants as well as refugees in his number.

But, he throws out a number, a percentage and talks about a tiny number. It is still a small number, but as others have mentioned, it only takes one to commit an act of terrorism.

Terrorism does not have to be a big flashy event to have an impact. Small events still cause terror and will force us to change our behavior.

This article talks about the impact of immigrants & refugees on the educational systems of smaller communities. Since a lot of the refugees are placed in lower-cost communities, the impact is significant. Any attempts to help the newcomers with specialized programs have been met with ACLU lawsuits.

19 hijacking terrorists forever changed the world. Imagine what 300 could do…

Iggy wouldn’t mind a tiny number of tiny pieces of shrapnel in his brain. Probably couldn’t hurt him much.

Need to buy some property right next door, both sides, to Ignatius for multiple apartment (ghetto style) buildings.
Need to also do it near pelosi, schumer and their ilk. They’re so sure of their immigration buddies let them have a whole slew of new neighbors. Maybe they can have bbq’s every weekend as the new neighbors immerse themselves in the new culture.

I think Obama tried to do something like that but I am not sure it was passed.

The stooopid, it burns!

“DAVID IGNATIUS: . . . There’s an assertion that 300 refugees have been a subject of criminal counter-terrorism investigations. So see, here’s the threat as people have looked at those numbers, they’ve noted that 300 people is, by one count, 1/15 of 1% of the refugees who have come since 9/11 from the six countries that are subject to this ban. So it’s a tiny number.”

1. lot of people who came into this country from Libya, Sudan, Somalia, Yemen, Syria, and Iran have already been convicted for terrorism related offenses, are already dead, or have gone off to Jihad. They’re no longer among the 300 currently under investigation.

Who came up with this stupid talking-point number, CAIR or the Islamic state. As if the 300 people CURRENTLY under investigation are the sum total of immigrants/refugees who have turned jihadi in the past 16 years. I’d be embarrassed to say it even as a professional liar for CAIR, but I’m under the impression that went right over both of their heads and they never questioned it. As if, for instance, we haven’t been investigating and prosecuting people for terror related offenses since 9/11 up to now.

2. Admittedly a small percentage of Muslims will become actual jihadis. But they will have a lot of support from the community, which won’t talk to the police and will turn out to pack the court room and intimidate witnesses. And I’m not joking. Last year 9 Somalis were tried in Minneapolis for attempting to join the Islamic State. The atmosphere in the court house was so bad the government requested extra prison time to teach the entire community a lesson. Here’s part of a sentencing memorandum for one of the defendants.

“Respect for the law is a particularly important factor in this case. No trial in the aggregate memory of the U.S. Attorney’s Office has been conducted in more of an atmosphere of intimidation, harassment, and incipient violence than the trial of this case. The families of cooperating defendants were harassed in the courtroom, in full view of the testifying witness; there was a fistfight in the corridor outside the courtroom; multiple individuals had to be ejected from the courtroom for not following the Court’s rules of behavior. A stern sentence is needed to promote respect for the law, to demonstrate clearly that this is a nation of laws.”

3. They will bring their culture with them. Muslim immigrants in the west have a game they literally call “the rape game.” And it’s a toxic brew of cultures when Muslims mix with America hating leftists. Taking Europe as a guide, rapes, sexual assaults, violent crimes (in Sweden the migrants are using hand grenades; where the hell do you get hand grenades in Sweden?), property crimes, and in leftist cities the elected officials, police, and media will lie and cover it up.