VIDEO: UW-Madison Students Support Freedom of Conscience Until it Conflicts With Liberal Ideology

VIDEO: UW-Madison Students Support Freedom of Conscience Until it Conflicts With Liberal Ideology 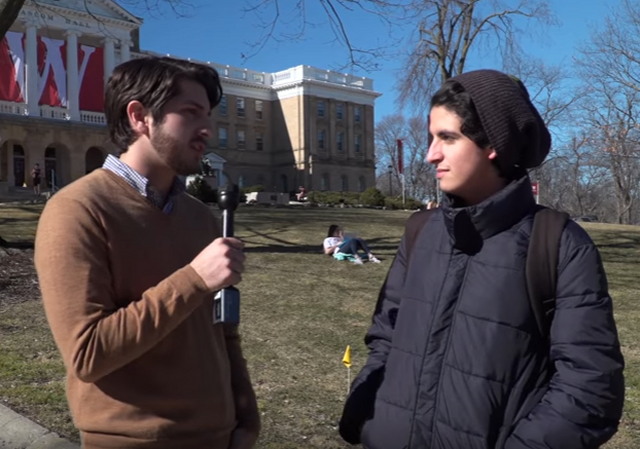 Alliance Defending Freedom recently visited the campus of UW-Madison and asked students when it’s OK to refuse to do business with someone. Two hypothetical situations presented to students sounded fine to most but a third caused quite a bit of discomfort.

Should a designer be forced to work with Melania Trump? Of course not, most students respond. Should a Muslim singer be able to refuse a Christian church’s request for service. Most students agree.

Should a Christian photographer be able to turn down a gay wedding? Well…

WATCH: University Students Stumble over Who Has Freedom to Live and Work According to Beliefs

We’ve been hearing a lot lately about the freedom of creative professionals to live and work according to their beliefs; from fashion designers in New York City to floral designers in small-town Washington State.

But what if Sophie Theallet — a well-known fashion designer — were thrown in jail after she told the world she would not design a gown for First Lady Melania Trump? Can you imagine the media firestorm that would create? Then why is it any different if a pro-life photographer and writer faces fines that would put her out of business for declining to use her talents to promote abortion?

For Amy Lawson, blogger and owner of Amy Lynn Photography in Madison, WI there is no difference. That is why she is challenging a sweeping local ordinance that forces commissioned creative professionals to promote messages that violate their beliefs.

For many, the issue is not so clear-cut. For them it seems that the freedom to live and work according to your beliefs really depends on what you believe.

Ever since the election last fall, the left has rediscovered its respect for freedom of conscience. The same people who spent part of the last eight years demanding Christian bakers and pizza shops support gay marriage have dome a 180 on the issue.

Describing the left’s previous attitude has become an oft repeated joke on Twitter. “Bake me a cake, bigot.”

Now that’s all changed. Liberals cheer when a business refuses Trump in any way. The same liberals who were comfortable forcing the Little Sisters of the Poor to provide birth control less than a year ago.

May this be a teachable moment for all of us.

Unfortunately the people capable of learning this lesson aren’t the ones that actually need it.

Too many in college are idiots. Logic escapes them.

Some of them are being taught- quite literally – that logic is racist oppression.

Its called groupthink and it quickly falls apart in the presence of logic.

notamemberofanyorganizedpolicital in reply to showtime8. | March 14, 2017 at 2:42 pm

RE: “Students Support Freedom of Conscience Until it Conflicts With Liberal Ideology”

Why that’s not freedom at all. That’s called “SLAVERY”
(to their Slave Masters, the Regressive, Leftist Democrats).

will be parsed as one denying rights and one just a simple refusal of service, we know how this ends

Rights is rights except they’re on the left.

Rights is rights except when they’re on the left.

(Thumbs up for an edit function.)

Are people really this stupid?

You want to believe that the ninnies who end up being on videos like this are the exception but it happens too often.

A few years ago I saw a short clip randomly asking students at a NY area college to look at a map and identify their general location. Nearly half could not do it.

And think how much better this will be when teachers don’t have to pass any aptitude test! The blind can lead the blind, the under-protected illiterate class will be championed and put in the classroom to . . . um, well, you know, teach them . . .. um, where the safe spaces are on campus. After all, they need to retreat and mush Play-doh in order to regain their center where thinking and learning are no longer priorities. How diverse and multiculturally fabulous is that?

This is the power of taboo at work.

These are not stupid (i.e., unintelligent) young people.

And they reach the right conclusions right up to…

Taboos. They would have to have courage and confidence to violate the taboo of denying a gay person any-damn-thing, which is only logical given their other responses.

Another word for this is GroupThink, and we have the same propensity on the right.

You have to learn to fight it.

“These are not stupid (i.e., unintelligent) young people.”

Yes, they are. Dumber than a 2×4. They will likely, most of them, be that dumb 30 years later. They will number in the millions and vote for people like Hillary Clinton.

Barry, Rags, you’re both right. These young people are not stupid, but they are malleable and impressionable. Like all of us at that age, they are searching for something to believe in, a worldview they believe to be their own.

Sadly, they do not have the exposure to diverse opinions or ideas that might help them along the way; they have no decisions to make, no critical thinking, they simply absorb the only message they are allowed to hear.

They are spoon-fed a steady diet of “how to be outraged in any situation,” “how to make protest signs using your own bodily excretions,” and “how to register to vote in multiple states.”

When they aren’t busy identifying and condemning thoughts that “trigger” them and force them to retreat to their Play-doh-laden “safe space,” they just walk around campus like zombies. They mindlessly repeat whatever leftist propaganda they’ve most recently heard and lash out at anyone who might challenge them as racists, blah blah blah ists.

This is and always will be at the root of any decline in everything that is even vaguely unifying, be it socio-cultural, patriotic/nationalistic, or geo-economic. Mindless zombies chanting the mantras of the Weather Underground and of the SDS are probably not the best leaders for our future, but this is what we have.

What is happening at the university level is that students are no longer being taught how to think, they are being told what to think.

It is about thinking beyond the surface.

Ask one of these brain washed dainties if they have a positive or negative feeling about gays. Pretty much across the board they will respond with the positive. Ask them if they have positive or negative feelings about a gay man taking a mouth full of ejactulate from his boyfriends feces covered penis, and the answer will probably shift to the negative.

What you are is what you do seems to be beyond the surface.

Over 2 twenty something women dicussing why The Lion King was racist. Apparently, having the bad animals in the story being black/dark is racist and having the hyenas speak with a Mexican accent makes the movie racist. I should have asked them if having the kings of the beasts yellow meant that the movie was promulgating the superiority of orientals. LOL!