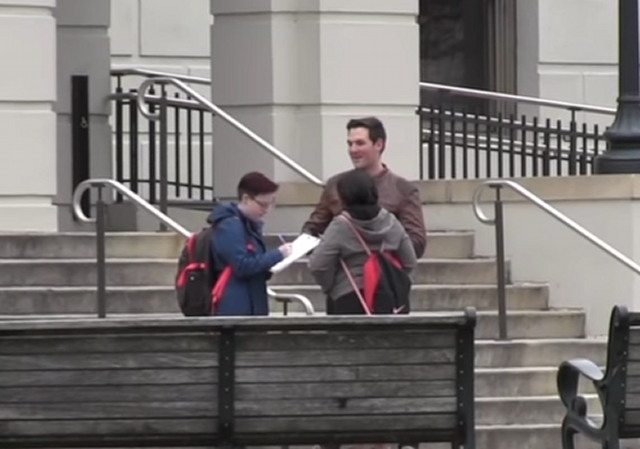 Check out this story from Campus Reform:

Since the election of Donald Trump in November, liberal students and professors around the country have expressed their distaste for the president in a variety of ways.

As reported on by Campus Reform, these people often resort to extreme measures to keep conservative ideas off their campuses.

While many students and administrators often refer to their love of diversity, how do they feel about a diversity of opinion amongst their professors?

To find out, I went undercover at American University, posing as a student with the fictitious group “American Students for Diversity.” Armed with a clipboard, I asked students if they would be willing to sign my petition to urge the school to ban the hiring of any professor who had voted for Donald Trump in November.

Throughout the day it became clear that the overwhelming majority of students on campus had no interest in hearing from any professor holding political beliefs different from their own. Student after student eagerly signed the petition; one said having a professor who voted for Trump would “really inhibit people from going to class.”

Ethically bankrupt, overall, they are proving to be a worthless generation of aspiring fascists.