Seven occurred in Birmingham, a city known as a breeding ground for radicalization. 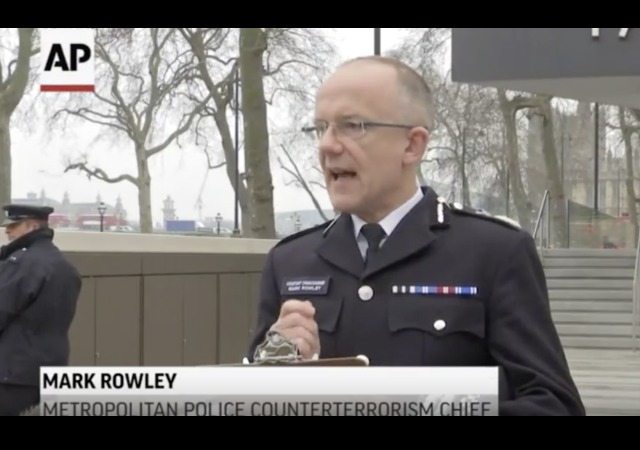 The U.K. police announced it made two “significant arrests” on Friday in connection with the terrorist attack that killed four people and injured 40 more. Top counterterror office Mark Rowley explained, but did not provide many details:

The latest arrests were a man and a woman detained early Friday in Manchester, northwest England. Police believe Masood acted alone but Rowley said police were trying to determine whether others “encouraged, supported or directed him.”

The Islamic State group has claimed responsibility for the attack on Westminster Bridge and at Parliament.

ISIS took responsibility for the terrorist attack when it released this statement on Thursday:

“The perpetrator of the attacks yesterday in front of the British Parliament in London is an Islamic State soldier and he carried out the operation in response to calls to target citizens of the coalition,” the Amaq statement said.

After the attack, the police conducted numerous raids across London, Brighton, Birmingham, Manchester, and Wales:

“We’ve seized 2,700 items from these searches, including massive amounts of computer data for us to work through,” Rowley said, adding that contact had been made with 3,500 witnesses.

“We’ve received hundreds of uploads of video images to our online platform. Given this attack was in the heart of the capital we also, of course, are dealing with statements from a wide range of nationalities.”

They have arrested ten people, four females and five males. They released one female on bail overnight.

More Info on the Attacker

Birmingham resident Khalid Masood, 52, drove a rental car into crowds on Westminster Bridge before he plowed into the gates outside of Parliament. He exited the car and stabbed an officer to death before armed cops shot him down.

Masood later died of his injuries.

Masood was born Adrian Russell Ajao and recently converted to Islam. Rowley said Masood had many alias. Prime Minister Theresa May told Parliament on Thursday that the police knew about Masood and that he faced numerous charges in the past, including over “concerns about violent extremism.”

He has two children from a former partner and taught English. The police revealed Masood worked in Saudi Arabia for four years.

Birmingham, the U.K.’s second largest city, has become a target for radicalization. Seven arrests of those related to this week’s attack happened in Birmingham.

Last August, police arrested five people who they suspected planned a terrorists attack. Before that, in April, authorities charged three people with terrorism. Other residents have gone to the Middle East to fight with terrorist groups:

Other residents have made their way to fight alongside hard-line Sunni Muslim militants in the Middle East. One of the most high-profile, Junaid Hussain, went to Syria and became a leading hacker for Islamic State. He was killed by a U.S. drone strike in August while he was in a car in Raqqa, Syria.

Another former Birmingham resident of Algerian origin, Rabah Tahari, was named by U.K. lawmakers as the leader of a group fighting in Syria called Kateeba al-Kawthar.

In 2013, Somali terrorist group Al-Shabaab released a video to celebrate the murder of the soldier. The fighter in the video listed the top U.K. towns the group’s members have come from and Birmingham came in first. It has only grown since then:

The spread of extremism in Birmingham had continued unabated since the Al-Shabaab video was posted. A study earlier this year estimated that one in 10 of all those linked to Islamist terrorism in Britain and abroad came from just five council wards in the city. Thirty-nine convicted terrorists came from Birmingham, which has a Muslim population of 234,000. The wards of Springfield, Sparkbrook, Hodge Hill, Washwood Heath and Bordesley Green supplied 26 of them.

It is a fact that surprises and raises concern that the numbers from Birmingham of those who had embraced extremist violence is more than those from West Yorkshire, Greater Manchester and Lancashire, which, between them, have a Muslim population of just under 665,000.

“two ‘significant arrests’” — after the fact. The victims feel much better now.

Investigations and after-the-fact arrests are a plan for losing a guerilla war. Passive and reactive methods are fatal for the West. It is also the plan of the left.

Oops:
They have arrested ten people, four females and five males. They released one female on bail overnight.