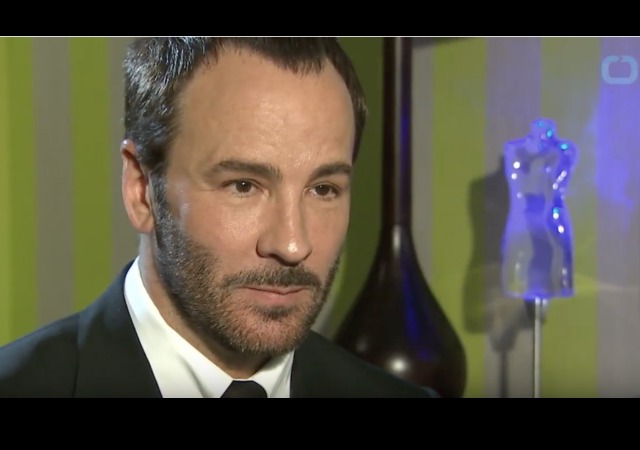 While some of the elite Hollywood types complain about President Donald Trump’s victory, others have come to embrace it and let it humble them a little. I reported about how it opened actress Jennifer Garner’s eyes, but it also opened designer Tom Ford’s eyes:

“Oddly, it made me want to come back even more,” Ford told Women’s Wear Daily, which reported that the designer recently bought a house in Los Angeles.

“We have a tremendous number of people in this country who feel disenfranchised and clearly we are not relating to or speaking to them. I am at my core American, and it made me want to come back. It didn’t make me want to run away.”

Instead of lashing out at Trump supporters, Ford realized that the president spoke to those who have felt ignored and also needed to be taken seriously:

“I think when you sense that there is a divide in your country and that there are people who perhaps you’re not relating to, and that those of us who are fortunate enough to live in a world of very liberal human rights and privilege, it’s a wake-up call that we’re not addressing a big part of the country that does feel disenfranchised,” he explained.

“It made me feel more nationalistic, if anything. The whole country is not like New York and L.A. and the world that I am used to living in.”

BOOM. When will the other elite realize this?

Last month, Garner made similar remarks to The Washington Post when she claimed she would help Trump uphold a few of his campaign promises even though many of her friends “want to turn their back to this administration.” Garner refuses to do that since many of the poor communities she has helped “went big for Trump” in November:

“People felt like Trump really understood them, that he was going to come in and create jobs for them,” she said. “They felt like they needed something to just turn everything upside down.”

Ford made news when he said he would not dress First Lady Melania Trump, joining a long list of designers, but he later clarified these comments:

“I think that whoever is the President, or the First Lady, should be wearing clothes at a price point that are accessible to most Americans, and wearing clothes made in America,” he told he magazine. “My clothes are made in Italy, they’re very, very expensive. I don’t think most women or men in our country can relate to that, and I think the First Lady or the President should represent all people.”

How quickly will the pouty left initiate a boycott of any related products of his?

notamemberofanyorganizedpolicital in reply to casualobserver. | March 20, 2017 at 3:49 pm

But…but…but….they really can’t afford them (so no lost sales there). Plus Bernie, Hillary, Obama’s etc. don’t have the common sense to wear clothes of good taste such as Ford’s.

We need to share this around everywhere, since Tom Ford is a huge opinion leader and trend setter.

Tom is originally from “fly over country.” You know the despicable part of America that makes up around 90% or so of the country….. “1961 Texas” to be specific……..

Maybe so, but then how quickly will the happy Right start a BUYCOT? Ah, the beauty of market forces. The left is finding how little their pouty faces really matter.

However they may dress or wherever they may live… or the hue of their skin. [class] diversity and conflict are not American core values per America’s charter and organizing documents (i.e. conservative ideology).

Oh, well. On one hand. On the other hand. Always and forever. Baby steps.

“I think the First Lady or the President should represent all people.”

Did he say the same thing when Michelle Obama bought very expensive clothes when her husband was president?

notamemberofanyorganizedpolicital in reply to blacksburger. | March 20, 2017 at 3:56 pm

I would imagine Tom Ford didn’t fancy endangering his life with such bold, honest comments then. SNARK!

“The whole country is not like New York and L.A. and the world that I am used to living in.”

Methinks Michelle bought them off the rack.

Tom Ford didn’t make them special for Michelle or do fittings for her from what my research reveals.