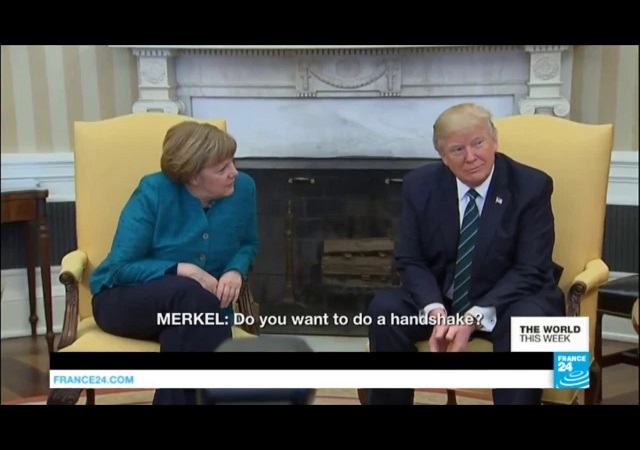 A video footage, in which President Donald Trump apparently ignores a handshake request from the visiting German Chancellor Angela Merkel during a photo op in the Oval Office, has irked the German press.

In the video, press photographers can be heard urging both leaders to shake hands for the photo. Prompted by reporters, Merkel is heard asking Trump: “Do you want to do the handshake?” Trump appears to ignore the request.

German broadcaster NTV complained lack of public affection during the bilateral meeting with the headline “No Kiss On the Cheek, No Patting”. The German TV channel contrasted Trump’s apparent snub of Merkel with chivalry shown by him towards the British Prime Minister Theresa May during her Whitehouse visit in January.

German magazine Der Stern referred to anonymous reports talking about ‘chilly atmosphere’ at Trump-Merkel meeting in the Whitehouse, writing: “Donal Trump did not react to Angela Merkel’s request [for a handshake].” 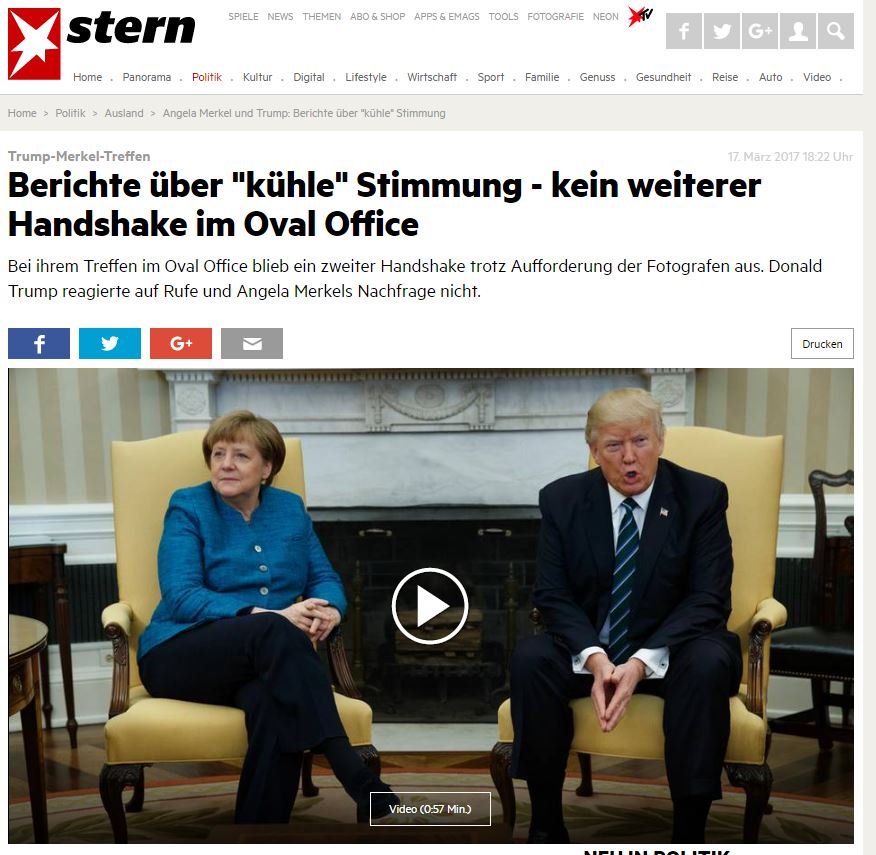 The left-wing European press was also incensed at the apparent insult shown towards their beloved German leader. Writing for the British left-wing newspaper, columnist Moustafa Bayoumi asked, “What is it with Trump and handshakes? This is getting awkward”

In all fairness to both the leaders, it is unclear if President Trump was able to hear Chancellor Merkel amid all that cracking and shouting in a room filled with reporters and camera.

Leading German newspaper Frankfurter Allgemiene Zeitung used the English phrase “awkward moment” to describe the photo-op incident in the Oval Office, the newspaper was however unsure if it was a “conscious gesture or misunderstanding?” 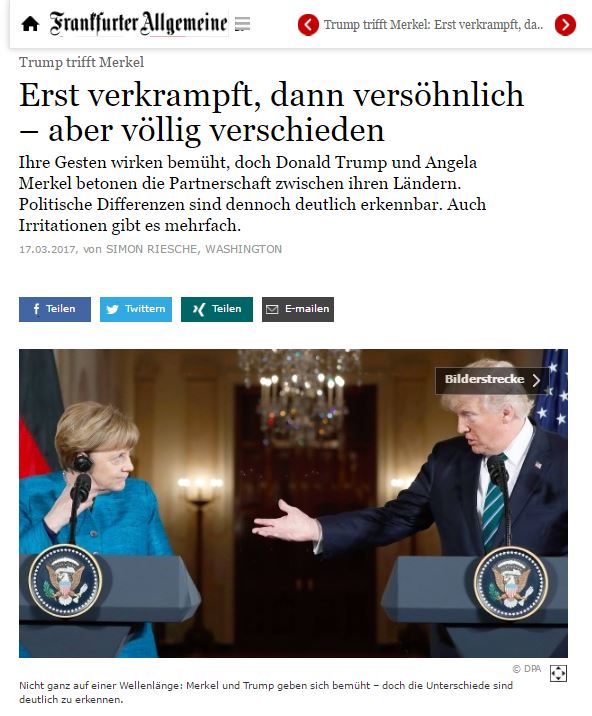 Germany’s public broadcaster DW News did not read too much into the faux pas and was upbeat about the state of U.S.-German ties:

[…] And their public statements during the highly anticipated press conference only underscored the palpable wish to restart the personal relationship between both leaders, after Trump’s vicious comments about Merkel during the election campaign, and to restore the traditionally close partnership between both countries, which has been in question ever since Trump took office.

It was, of course, up to Trump try to reset the relationship with Merkel and to reaffirm the commitments to transatlantic ties, and at first glance, he did.

Whatever the truth behind the photo-op moment may be: Trump’s not hearing Merkel’s words or not wanting to give in to the requests of the ‘paparazzis’, the media has found another incident to paint Trump as rude and ‘unpresidential’.

In fact, Trump played a gracious host to the visiting German leader. If Merkel had reasons to resent Trump for his comments on her handling of the European Migrant Crisis, Trump too could take offence at repeated insults hurled at him by the members of Merkel’s cabinet — something that couldn’t have gone on without Merkel’s tacit approval.

Media loves to create storm in teacup if it helps them push their anti-Trump narrative. The fact remains that Trump played a gracious host, while at the same time calling out Merkel on Germany’s NATO spending and multi-billion bilateral trade deficit.

Anything that hacks off the Lie-Stream Mass, Globally-Owned, Corporate Media Hacks is a VERY GOOD THING.

“No Kiss On the Cheek, No Patting”

Wait. Wouldn’t he need to get her to sign a consent contract?

He wouldn’t want to be accused of rape.

Yeah, well, Merkel is an East German commie, so, yeah ….

I’d point out the Germans needed to be more diplomatic. They seem to forget they were the ones who really said many things about Trump because they feared his attitude about the EU. In short Trump didn’t start it and they seem to think, probably because of their elite attitude that Trump needs to come to them after their behavior and not the other way aroud. Germany is use to being top dof in the EU but when it comes to America they are the taker not the giver in the relaionship. They have much more to lose and the German press were foolish to try and ask embarrassing questions to Trump. It is so funny they think that does anything but hurt the psoition of Germany with Trump and the United States. I would say they will regret they didn’t gain the political ca[ital May did when she came.

That said, since Obama spied on Merkel, and likely influenced German elections, as he did in Israel, Libya, Ukraine, etc.. I wonder if Merkel deserves a revisitation of her role in social justice adventurism, including elective regimes changes; CAIR; and their cover-up.

OMG, that is so loud! I don’t think Trump heard Merkel. The only reason I could hear her is because of the closed captioning.

That woman needs a good head shaking and a wake-up call.