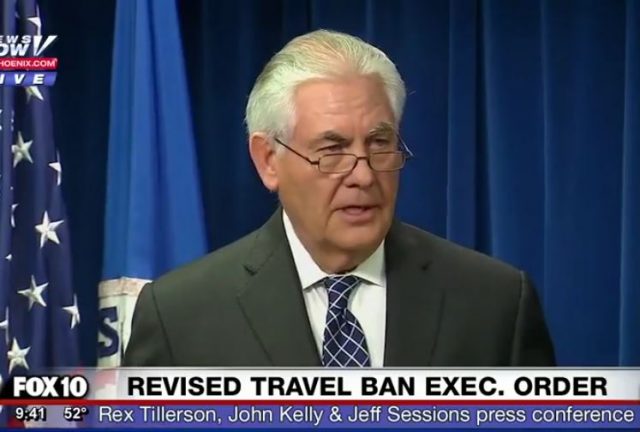 President Donald Trump has signed a new immigration order, exempting Iraq and those who already hold visas. It still prohibits people from six nations “from entering the U.S. for 90 days.” From The Wall Street Journal:

The new order doesn’t ban citizens of Iraq, one of many changes made to an original order in hopes of putting the measures on stronger legal and political footing. The White House says the ban is intended to stop potential national-security threats.

The revised ban applies to the nations of Iran, Libya, Somalia, Sudan, Syria and Yemen. The order is effective in 10 days, on March 16, which could address some of the judicial concerns about due process.

The new order only allows 50,000 admitted refugees. It also places Syria on the same level as everyone else while in the old order “indefinitely suspended the admission of Syrian refugees.” Here are a few exemptions:

In another important change, the new order won’t apply to people who had valid visas on Jan. 27, the date of the original order, or to anyone already legally in the U.S. It also doesn’t apply to legal permanent residents, also known as green-card holders. The original version affected nearly 60,000 existing visa holders from seven nations, according to the State Department, and left the treatment of green-card holders unclear.

The order takes effect in 10 days, on March 16, in contrast to the original order that took effect immediately, sparking chaos and confusion at airports.

An anonymous Department of Homeland Security official stated that Trump treated Iraq differently “because the country had agreed to “timely repatriation” of their citizens if they were ordered deported from the United States.”

“If you have travel documents, if you actually have a visa, if you are a legal permanent resident, you are not covered under this particular executive action,” White House Counselor Kellyanne Conway told Fox News on Monday. “I think people will see six or seven major points about this executive order that do clarify who is covered.”

The order also has given DHS “20 days to perform a ‘global, country-by-country review of the identity and security information that each country provides to the U.S. government to support U.S. visa and other immigration benefit determinations.'”

These countries “then have 50 days to comply with requests to update or improve the ‘quality’ of the information they provide to U.S. officials.” If they do not comply, then State Department, DHS, and intelligence agencies and officials “can make additional recommendations on what, if any, restrictions should be imposed.”

At the press conference, Attorney General Jeff Sessions said the administration believes it does not violate any laws:

“(The order is) not any way targeted as a Muslim ban … we want to make sure everyone understands that,” an official told reporters.

“The Department of Justice believes that this executive order just as the first executive order is a lawful and proper exercise of presidential authority,” Sessions said.

Don’t worry! The Ninth Circuit will make something up.