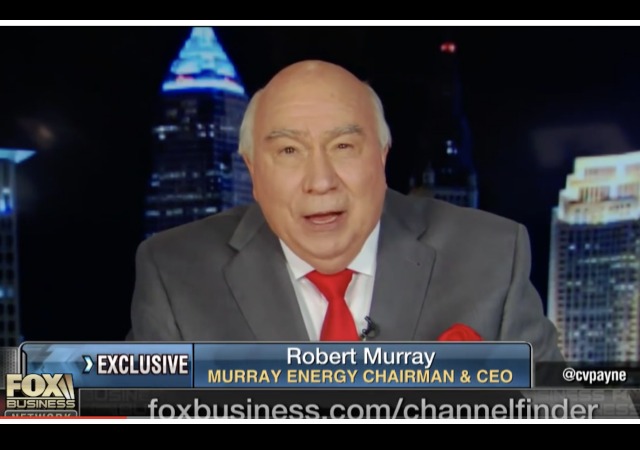 The head of America’s “largest privately held” coal firm has expressed optimism for his industry under President Donald Trump after a meeting held last month.

Murray Energy’s CEO and founder Robert Murray spoke with The Guardian on Monday. He believes that Trump will stick to his campaign promises for the coal industry by reducing regulations and overturning a few of President Barack Obama’s plans related to climate change.

It’s hard to deny his thoughts as coal communities in Virginia have seen a drastic positive change since Trump became president.

Cutting Back on Regulations

He also hopes that Trump will undo Obama’s decision to classify carbon dioxide as a pollutant. As Murray points out, previous environment regulations did not support this theory:

“We do not have a climate change or global warming problem, we have an energy cost problem,” Murray told the Guardian.

Last month, Trump signed an order to repeal the Stream Protection rule, which prohibited “coal companies from dumping mining debris in streams.” Murray lashed out at this plan, labeling it “unlawful and destructive.”

However, despite the optimism, Murray asked Trump to lower his expectations on bringing back coal mining jobs.

Murray told Trump that a lot of the lost jobs came from technology and competition from other energy sources:

“I suggested that he temper his expectations. Those are my exact words,” said Murray. “He can’t bring them back.”

Will Coal Thrive Under Trump?

Murray seems to think so:

“I would not say it’s a good time in the coal industry. It’s a better time,” he said.

He also reminded The Guardian why Trump won: he actually listened to everyday Americans in crossover country. While the Democrats and presidential candidate Hillary Clinton wined and dined with the elite, Trump paid attention to those who make America run:

“I live among these people. These are the people who fought the wars and built our country and they were forgotten by Democrats who had gone to Hollywood characters, liberal elitists and radical environmentalists. That’s all they represent today. They lost these quiet Americans. This was a victory for the working people,” he said.

Overall, though, Murray believes the coal industry will rise again under Trump, thinking the president will “level the playing field.” Remember how Obama used to pour money into other energy sources only for them to fail? *sough*Solyndra*cough* Murray hopes those subsidies will end:

Earlier this month, Fox News highlighted changes already being felt by a city in Virginia “where residents see coal as the once and future king.” The community has already started to thrive again:

“We load coal every day for the power plant in Virginia City,” explained Rick, a long-time supervisor for a major local operation who did not want to give his last name. “There’s one shipment a week for Georgia Power, and one for Tennessee Eastman.”

The past month has seen a resurgence of the coal industry that once formed the backbone of the region’s economy, and locals credit President Trump’s aggressive, pro-energy agenda.

The community has noticed a major change in the “met coal” markets, which is used to make steel. The price for that coal has jumped “twice as high as it was a year ago.” Ramasco Resources started a coal mine in December and the company hopes to open two more in 2017. Corsa Coal will open a mine in May.

“I suggested that he temper his expectations. Those are my exact words,” said Murray. “He can’t bring them back.”

Just as I’ve been saying.

A bit off topic – but related to the environment… Seattle had a major failure in their waste processing system and has been dumping raw sewage into the Sound.

“Wastewater is being screened of garbage, briefly settled, disinfected and dechlorinated before it is sent to Puget Sound, still cloudy with solids.”

But discharges of wastewater less than 30 percent clean for solids — rather than 85 percent clean as required by state permit — are ongoing from the plant’s deep-water discharge, three-quarters of a mile offshore.

A major point in the article is that the local environmentalists are not complaining about the sewage issue since it is government that is doing this, not a private company.

I saw this article via Tony Heller’s blog https://realclimatescience.com/2017/03/seattle-a-city-of-frauds/ . I wonder if it will start to get wider coverage. However, I bet that a coal mine spill will get extensive coverage, even if the impact is much smaller than what has happened in Seattle.

It’s wonderful to see America quit trying to kill herself…. Wonderful…. to see us make our own lives easier, rather than harder, harder, harder…..

Murray told Trump that a lot of the lost jobs came from technology and competition from other energy sources:

Yeah, if the government acts illegally long enough, that’s what happens. Natural gas got a subsidy from Obama regulations, and the power plants got converted to it.

Maybe someone should see if that counts as a taking.

I’da thought the coal industry could afford a better spokesperson than Morbo the Annihilator (http://futurama.wikia.com/wiki/Morbo)