The Latest on the Terror Attacks Outside the UK Parliament

The Latest on the Terror Attacks Outside the UK Parliament 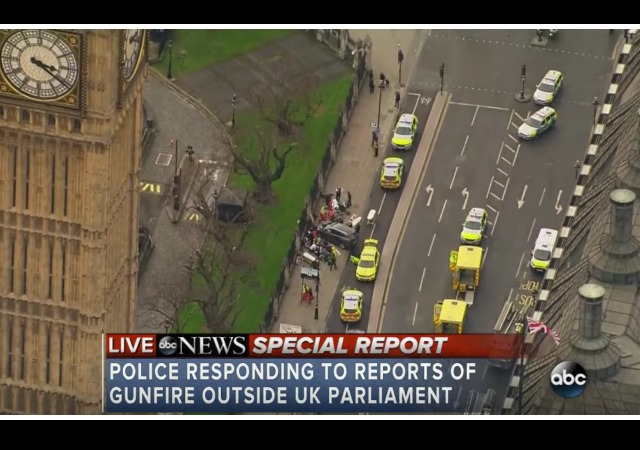 Four people have died, including a policeman and the attacker, in London outside of Parliament in the terrorist attacks that left 20 people injured.

Police said a vehicle mowed down pedestrians on London’s Westminster Bridge, leaving more than a dozen with injuries described as catastrophic.

Around the same time Wednesday, a knife-wielding attacker stabbed a police officer and was shot on the grounds outside Britain’s Parliament, sending the compound into lockdown

The British police began “a full counter-terrorism investigation” after the attack. London Mayor Sadiq Khan confirmed that officials will treat the situation “as a terrorist attack until the police know otherwise.”

The attack caused officials to lock down Parliament and shuttle away Prime Minister Theresa May to safety. Acting Metropolitan Police Commissioner Craig Mackey described what happened:

He said that the incident started at 2.40pm and that the investigation was responding to reports of “a person in the River Thames, a car in collision with pedestrians on Westminster Bridge and an incident involving a man with a knife”. He said it was “ongoing” and appealed for members of the public with footage of the incidents to come forward.

He added that he could not confirm the number or nature of injuries sustained.

President Donald Trump reached out to May and “pledged the full cooperation and support of the United States Government in responding to the attack and bringing those responsible to justice.” The State Department announced that its officials will monitor the situation and warned Americans to stay away from the area:

Spokesman Mark Toner said Wednesday: “We stand ready to assist in any way the U.K. authorities would find helpful.”

He added that the U.S. Embassy in London is closely following the news and stands ready to help any affected Americans.

“Our hearts go out to those affected,” Toner said.

French officials confirmed that three French schoolchildren were injured during the attack:

The three students from the Concarneau Lycee in Brittany, western France, were on a school trip there, a foreign ministry spokesman said in a statement. The statement did not say how serious the injuries were.

A total of 90 students from the school were in London, about a dozen of which were in the area of the attack, an official at the school told Reuters.

“As the centre of London was hit by a cowardly attack, France assures the British people of its solidarity,” the foreign ministry statement said, adding that French authorities were in contact with their British counterparts.

Witnesses described the attack to the media:

The Port of London Authority says a female member of the public was recovered from the river, injured but alive.

Rick Longley told the Press Association that he heard a bang and saw a car plow into pedestrians and come to a crashing stop. Images from the scene showed pedestrians sprawled on the ground, with blood streaming from a woman surrounded by a scattering of postcards.

“They were just laying there and then the whole crowd just surged around the corner by the gates just opposite Big Ben,” he said. “A guy came past my right shoulder with a big knife and just started plunging it into the policeman. I have never seen anything like that. I just can’t believe what I just saw.”

The man seen on the stretcher is the person suspected of carrying out the #London terror attack on #Parliament in #Westminster pic.twitter.com/feBy638YjO

But hasn’t Britain controlled all of the guns and knives.

But guess who the Mayor of Londonstani is now………..

Don’t Dems want to register guns like cars? That helped…

With a Muslim mayor in London and his pro-any immigrant policies, this should be an interesting exercise in deflection.

LI has been ahead of the curve on this issue with Israel coverage.

Will non muzzies take back London?!?

Israel – Nice, France – Columbus, Ohio and now London. How do you combat an enemy who isn’t afraid to die? I don’t think there is an easy answer, but letting that enemy come in your back door by the millions certainly isn’t going to help.

The English had a solution for this when the Thugees tried it in India…….

Let me guess –
Tonight: Candlelight vigil for peace.
Tomorrow: Parliamentary statements on how we all need to hug a Muslim.
Next week: Increasing the British immigration limits to prove the terrorists aren’t winning!

Some citizens and their families bear the ultimate price for utopian nightmares created by politicians.

English flags on FB and hashtags everywhere because that is how the snowflakes fight terrorism. Yet they will draw blood when it comes time for the notmypresident rallies. We have a percentage of the population that practices sedition and treason vs their legitimate government but barely shows any real outrage at terrorists murdering innocents in cold blood.
You do know who they will blame for this don’t you? Trump. His proposed visit to London to visit the parliament caused a “youth” to show his displeasure in the only way they know how. Just watch and wait for that spin.

English flags? I think not. The English flag is a white supremacist symbol, donchaknow? No self-respecting snowflake would ever display one. It’s difficult enough for them to display the UK flag without first apologising for every wrong that has ever been done; the English flag is completely out of the question.

You are correct, what was I thinking. They’ll fly the ISIS flag to sympathize with the dead terrorist.

Has his family retained a lawyer for the lawsuit yet? Losing control of your vehicle can be very upsetting. Surely the racist police could have at least offered him a tea to calm him a bit before taking into custody.

Take away the guards, walls and fences protecting parliament, they politicians get no more protection than their regular citizens.
Maybe then you’d see change you could believe in. If I was an ordinary Brit I’d find the black market for guns and get a couple.

On the same day Erdogan says “If Europe continues this way, no European in any part of the world can walk safely on the streets”

notamemberofanyorganizedpolicital in reply to Massinsanity. | March 22, 2017 at 7:30 pm