Student Group Censored After Complaining About Lack of Free Speech

Student Group Censored After Complaining About Lack of Free Speech

“We feel the decision that was made is misguided and disproportionate” 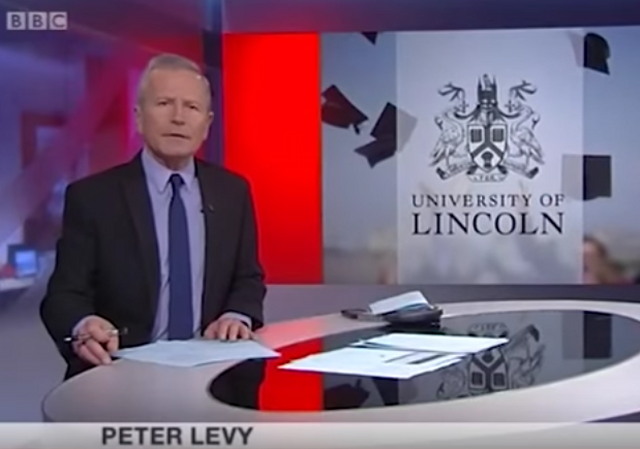 A conservative student group at the University of Lincoln in the UK criticized their students’ union over a lack of free speech over criticism of an online magazine. In response, the students’ union shut down the group’s social media accounts, thus proving their point.

The University of Lincoln Conservative Society has been forced to hand over control of their twitter account to the Students’ Union.

It follows a tweet sharing a report which said the University of Lincoln had a bad record on freedom of speech.

The university as a whole was given a ‘red’ status by online magazine Spiked, which means the institution has “banned and actively censored ideas on campus”.

On Monday afternoon the society tweeted confirmation their twitter account will be suspended until May, however they plan to appeal the decision by the SU.

Due to SU orders this Twitter account will no longer be active. We hope to return on 1st May. Sorry for any inconvenience.

A spokesman for the student group made this statement:

“This decision was reached by the SU following an anonymous complaint over two tweets by the society account. The first, in relation to freedom of speech, linking an article from ‘Spiked’ and the second was in relation to an SU questionnaire that had to be completed before voting in recent SU elections…

“We feel the decision that was made is misguided and disproportionate, as the society was simply trying to raise the important issues of free speech and democracy, and the tweets in question have been taken out of context.

Here is part of a statement by the Students’ Union, also courtesy of The Linc:

“Freedom of speech is a fundamental value of the Students’ Union. The SU is built on a foundation where students can express opinions and ideas freely within the law.

“The Students’ Union is run by students for students. There are agreed policies in place – based on national guidance for charities – which protect students and aims to provide a safe environment in which complex issues can be discussed and debated.

Ahh, a “safe environment.” That almost sounds like a “safe space” doesn’t it?

Robby Soave of Reason has more on this:

Talk about proving a point. The University of Lincoln’s student union has suspended a conservative student group’s social media accounts—an act of retaliation against the group for daring to criticize the student union’s hostility toward free speech.

In effect, the British university’s student government is censoring students because they objected to censorship.

“Just to reiterate the irony of this situation,” wrote a different conservative club at another university, “their student union, upon being criticized for being anti-free speech, have silenced those complaining about a lack of free speech!”

The story has gone international as concerns over free speech are growing throughout academia. Here’s a video report from the BBC News:

Even though the group being censored is conservative, there are student protests being planned.

Here’s more from The Linc:

Protest organised against SU over freedom of speech clampdown

A sit-in protest is being organised at the Engine Shed – a student union venue – on Friday in opposition to the University of Lincoln Students’ Union (SU).

It follows the SU’s decision to suspend the Conservative Society’s social media accounts after they tweeted a link to a report which criticised the university’s approach to freedom of speech.

The SU have defended the suspension saying there was a “suspected breach of the code of conduct” and “freedom of speech is a fundamental value of the Students’ Union”.

The event is called the UoL Free-Speech/Repeal the Conservative Society Ban Protest.

Collectivists lack a sense of self-parody.

Well, among many other forms of sense…

At AOCS the Marines had finished hurricaning our spaces in the middle of the night.

Later the class leader for the day is about to march us back from the outskirts of hell, the swimming pool, to the middle of hell, the barracks.

As we have formed up, all he says is, “Try not to laugh.”

Being able to laugh at yourself is a powerful thing. In our case, we had picked our situation. So we laughed. And marched back. And the Marines knew we were all on the same side.

It’s not just us.

“The first salute a newly commissioned officer receives is a special moment. Naval tradition holds that the new officer should return the honor of a salute with the special token of a silver dollar. While at OCS, you should think about who you would like to give you your first salute.”

When I returned the salute of an enlisted man, I did so knowing I was doing something special

Here’s a video of the UoL Student Union competing in their annual fundraising event.

For the record, the ban has been lifted:

“After an appeal hearing this week, the University of Lincoln’s Students’ Union disciplinary panel has reinstated the Conservative Society’s access to its union-affiliated social media accounts.

We cannot provide details on the hearing other than to say that the original suspension related to a broader set of issues in addition to a breach of the social media code of conduct which the society signed as part of their membership.”

That is not to say that the ban should have ever occurred in the first place, but only updating the story.

Sounds like they’ve got a sensible MP, at least. And the town of Lincoln is definitely worth visiting if you’re in the area and have any interest in history.

I love how the Student Union avers that “this was not an act of censorship” when it very clearly was just that.