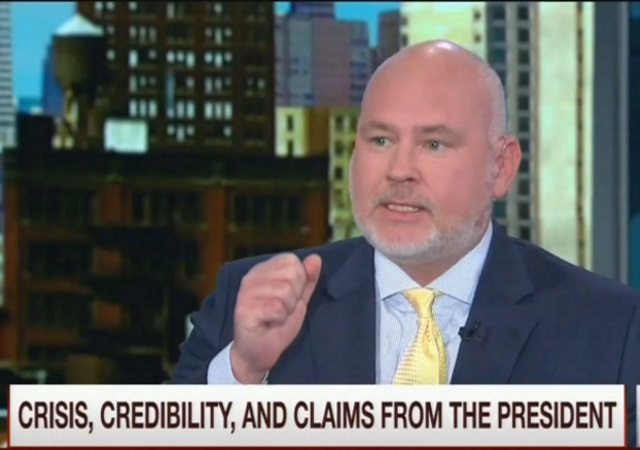 Shortly before the presidential election, GOP public relations worker Steve Schmidt saw Hillary Clinton “trending over 400” electoral college votes. He also predicted that Dems would retake the Senate and were “close” to retaking the House. We know how all that played out. So you probably want to take this morning’s comments from the man who brought you John McCain’s 2008 campaign with a gargantuan grain of salt.

Asked on Morning Joe what he would tell President Trump regarding his assertion that President Obama tapped his phones, Schmidt went on a rant.

Mika Brzezinski first asked Ari Fleischer and then Schmidt: “what would you advise the president to do,” about his assertion that President Obama tapped his phones?

STEVE SCHMIDT: I think someone has to go in there and say, Mr. President, one, this makes you look unhinged. Two, it’s not true. And now you’re at the hour if you don’t stop this, it will destroy your presidency.

You have no path to be successful, no passing of a domestic agenda. You will precipitate an international crisis. You are devaluing the words of the President of the United States at every hour. And at some point, in the next four years, the President of the United States will appear before the cameras on a day of national tragedy and have to talk to the American people, and he needs credibility to do that.

SCHMIDT: And across the depth and breadth of this administration, as we move in from month two to month three, the shattering of credibility is a fundamental issue with the non-stop lying by the president, by senior White House spokespeople, across the board. And it is pernicious in a democracy, it’s terrible for the American people and the people that have been complicit and his enablers in the White House, it’s very, very bad. Bad.

This is why I will never give ONE PENNY to the RNC. Because they might waste that money on a useless RINO Uniparty GOPe stooge. Guess what? If you support HILLARY and the democratic socialists, YOU ARE NO CONVERVATIVE! To hell with this guy, McCain, Gramnesty and the whole flock of RINOS.

His worldview works perfectly for a Democrat.

Not according to Wikileaks, or the New York Times, or Obama’s former speechwriter.

“Recently, the CIA lost control of the majority of its hacking arsenal including malware, viruses, trojans, weaponized “zero day” exploits, malware remote control systems and associated documentation. This extraordinary collection, which amounts to more than several hundred million lines of code, gives its possessor the entire hacking capacity of the CIA. The archive appears to have been circulated among former U.S. government hackers and contractors in an unauthorized manner, one of whom has provided WikiLeaks with portions of the archive.”

Two different stories by the New York Times, and at least one reporter, Michael S. Schmidt, is the same on both
https://www.reddit.com/r/The_Donald/comments/5y4ctw/the_nyt_plays_itself_with_wiretapping_lie/

I’ve been watching and reading the coverage of this story, and most of it obscures the real point, which is that this information, including the source code and names which has not been released by Wikileaks, has been widely circulated among former CIA employees.

According to the various tweets by Wikileaks, the disclosure to Wikileaks appears to be a responsibly redacted response to the original leaks.

The only thing Wikileaks has done is let us normies know that this set of expensive tools has been turned loose on us to unauthorized people.

If I remember correctly, he hated Sarah Palin and did everything he could to sabotage her.

Yes, your memory is excellent. She talked about it in her book, Going Rogue. Other Rinos “working” for JMc also treated her like she was a dolt–never detested Rinos more than during the 2008 campaign. But then, I’ve grown to despise them a little more every year since.

I believe Schmidt and Wallace did a book that became a movie attacking Palin. It was Schmidt’s idea to run Palin and then he blamed her when his incompetent campaign failed. They attack Palin whenever they have a chance. Nothing lower than a back stabber.
Schmidt was considered the top political guy going into McCain’s campaign. He failed so badly he couldn’t get hired for school board elections. People had discovered behind his tough brusque manner he was a fat man without a single good idea. Google his predictions. Not only did he assure everyone Trump would get slaughtered, but he stated Trump should be the first to humbly congratulate madame president elect.
His gig at MSNBC is to attack Republicans and tell us how wonderful Bush and McCain are.

This fellow exhibits a dangerous combination of Arrogance and Stupidity. He cannot believe that President Trump would actually have a different point of view. To him, Trump is lying. His brain cannot comprehend anything else.

WHERE has he been for the last 8 years of a President and his administration LYING and LYING?? If anybody destroyed the Presidency, it was Barack Hussein Liar Obama!!!

I’m starting to see the attraction of this silly Mika and Friends show … there’s really nothing that can get one started on a new day like the smell of hysteria in the morning.

But it’s deceptive … I don’t believe it is hysteria. I think it’s deliberate and planned, even if none too clever; it’s JournoList, and a program to align the President’s enemies so that they all deliver the same attack.

And it means that Trump is dangerously close to something the D’rats believe they must suppress.

Oh my… does this idiot have no shame?

A truly clueless fool who has been on the anti-trump
train from day one. Just look at his past record.
NO ONE takes him seriously.

As in Democrat Party operatives using the malware and snooping software to attack RNC related servers AND the Trump campaign? That would be Watergate taken to a whole super level….and totally believable to have happened.

This just shows how incredibly effective Trump is at playing the media and the Establishment. For weeks the media, and Trump’s enemies [read: everyone in politics and the government], have been scoffing at the idea that their charges and attacks again him, which are unsupported by any verifiable facts, are true and journalistically ethical. Now, they are placed in the position of damning Trump’s unsupported claims of electronic intercepts, run by the Obama government for being unsupported by Trump, himself. And, as we all know, to do that they have to impeach the source, trump, by calling him a liar. Interestingly enough, none of the former administration people, who have spoken on the subject, have denied that such intercepts existed, Their claims are that THEY KNOW of no such intercepts. This would lead one to strongly suspect that such intercepts DI, in fact, exist.

As to Morning Schmoe, this is simply a propaganda outlet. It plays on the emotions of a small audience with the ultimate goal of strengthening their fears in an effort to support the War On Trump. Their “reporting” is filled with innuendo and light on facts. That the GOP wing of the Uniparty is now using this forum to attack Trump is significant. It shows that Trump is still winning the contest.

Clowns like this can only exist in the DC/Northeast prog bubble. In the real world they would get their faces smashed in for spewing diarrhea out of their mouths all the time like they do.

Wikipedia and many websites state he is an employee of the Republican Party, a “Republican Strategist” and other lofty titles.

Assuming President Trump is the head of the Party, shouldn’t they pink-slip this guy?

I assumed Mccain was brain-dead, but it appears he just travels in zombie circles.

It is getting harder to tell how much of the anti-Trump emotion is real and how much is contrived to remain relevant. Especially for those who self-identify as GOP, it would seem their goal is mostly to get sound bites and perhaps preferred contributor status on the two anti-Trump cable news stations.

Schmidt is probably the worst example of the rino garbage infesting the GOP.

he sees his sins in everyone else.

hey Steve: here’s a nice big mug of #STFU to wash down an LD50 dose of #FOAD

What is it he is lying about? All these clowns are the same they just come out saying “Trump is a lying lier” or “the lying lier lies” but they never explain what the lie is????

So whats he supposed to have done now?