“How does it feel to work for a fascist?” 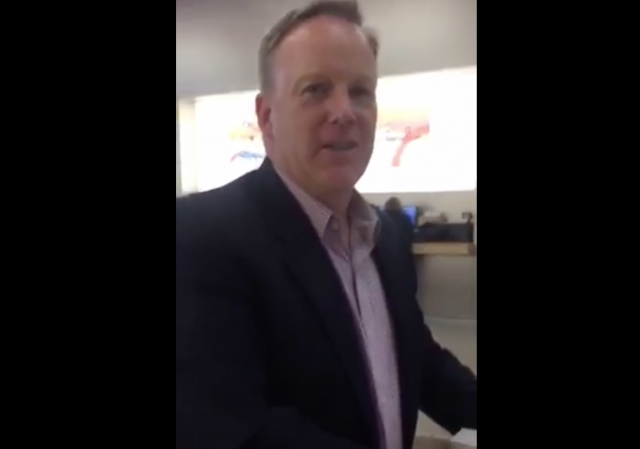 While there, he was ambushed by a woman who filmed the encounter. Relentlessly, she fired question after question, never even pausing to allow him to respond. Though nothing about the ambush suggests she was wanting dialogue.

Spicer was pelted with questions like “How does it feel to work for a fascist? Have you helped with the Russia stuff? Are you a traitor too? Are you a criminal as well? Do you feel good about lying to the American people?”

Politely and mostly ignoring the woman, Spicer smiled and responded only to say, “It’s such a great country, it allows you to be here. Thank you.”

The questioner is Shree Chauhan. She’s 33 years old and works for non-profit organization Parents in Partnership, an organization she runs. Not surprisingly, she’s been placed at the Betsy DeVos protest that took place last month.

Chauhan alleges Spicer displayed “thinly veiled racism towards her” by suggesting she shouldn’t be here. That’s some impressive word gymnastics, taking ““It’s such a great country, it allows you to be here. Thank you.” and turning it into something Racist™.

Only if we get apologies for all the lies and oh yeah, his thinly veiled racism toward me. ❤ https://t.co/u0VCNSHdxo

And as she told the Daily Mail:

‘He’s the press secretary for the president of the United States,’ she said.

‘Don’t tell me what he probably meant because he also works for this administration that has done all of these things.’

Chauhan was referring to Trump’s executive order in which he banned migrants and asylum seekers from six Muslim-majority countries in the Middle East and Africa.

‘He could’ve said, “Such a great country that allows dissent,” she said. ‘There’s a lot of ways that could’ve been said.’

‘To have someone who speaks for the president of the United States tell me to my face that I shouldn’t be here and I was born here – that is a real thing.’

He's the Press Secretary. Don't you think he would be better with his words? If he meant in the store say that. If he meant #1A say that. ???????? https://t.co/6REIoDYpUT

Words. How do they work?

And she blocked all of Twitter. I guess we can’t have a dialog with her. Just wanted to talk to her like she did to Sean Spicer, that’s all.

On the plus side … she didn’t say Spicer was doubtless in a hurry to get home so he could go back to beating his wife.

didn’t listen so take with grain of salt…

But there’s a problem with Chauhan’s description of events. It sounds to me as if there are a couple words at the end of Spicer’s reply which Chauhan left out. In the video, she steps on the end of his reply so it’s hard to make out. Spicer seems to be saying, “Such a great country that allows you to be here like this.” I listened to it half a dozen times. Again, Chauhan is speaking over him but the last word, “this,” is pretty clear.

The Left diesn’t want “dialogue” as yet another example clearly points out.
They identify as morally and intellectually superior and are thoroughly convinced they’re right about everything, so who needs “dialogue”…and shaddup!

They have no interest in explaining their positions or convincing the unconvinced, preferring instead to preach from on high. Not only is THIS why you got Trump, but it’s why you’ll get more and more Trump.
Keep up the good work Lefties!

A lot of people have been using that phrase over the last few months. I expect it to be a constant for the next four (or eight) years.

There are times when it is entirely appropriate, if not legal, to reach out and choke someone.

Let’s see–she initiates a verbal attack on someone, including hate speech, and moments later she is claiming victim status. Yup, that’s the left in a nutshell.

That would have been a good retort…only problem is…she probably never quits yapping!!!!!!:)

was she stalking him??

I”m sure it was just a coincidence that she was in that same store at the same time as Spicer.

Just like it was pure coincidence she happened to be in front the school where DeVos was to visit.

Well that explains a lot. She is linked with the Washington
Peace Center.

See bio on this page:

She is a professional activist. If I was Spicer, I would have her charged for stalking. I don’t think that was a chance run it, I think it was a setup. He handled it well.

Truth!!! They have training, seminars of training to earn certifications, on how to do this…….beyond what the get in college!

Projection. It’s in the progressive-leftist’s DNA.

Crazy is, as Crazy does.

First – has Apple made a statement about people ambushing and harassing their customers in their stores? If not, shame on them!

Second – she HAD to have planned that. Even an Alinsky-certified(tm) pro couldn’t have that all ready, with camera rolling, without PLANNING. Careful. Planning.

Third – Spicer should have Secret Service after this. Hope he gets some pronto!

Fourth – funny how this never happened to Michelle at Target, or one of Obama’s press secretaries….I wonder why?!

Fifth – reminds me of the Pence being lectured by the cast of Hamilton for their very false beliefs that Pence is “homophobic”……….

The insane left just can’t help themselves; no self-awareness. They just don’t get that THEY ARE THE ONES BEHAVING like the very Fascists they claim others are!! Can you say projection?!

“How does it feel to work for a fascist?”

She’s as big a clown as the moron with the Michael Brown fraud video and Snoop Idiot.

They just want attention from their psycho peers.