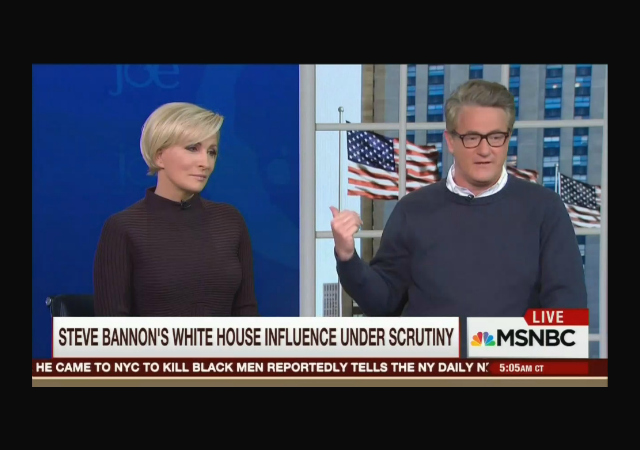 Scarborough was particularly outraged by the report that Bannon told members of the Freedom Caucus, “guys, look. This is not a discussion. This is not a debate. You have no choice but to vote for this bill.” Calling it perhaps the greatest tweet of the 21st century, Scarborough cited John Podhoretz on the subject:

“I’m Steve Bannon. i’ve been in politics since August 2016. You will bow before me, elected Republican officials! I ran a website!”

All outrage, all the time. Meh.

notamemberofanyorganizedpolicital in reply to Daiwa. | March 27, 2017 at 1:27 pm

Exactly. It is too much. They don’t get invited to a party and have been going insane ever since.

Not just “outrage” — but outrage based on anonymous gossip.

That seems to be 90% of the political “coverage” in the media these days.

I’m sorry Mark but I am tired of reading about msnbc and these two clowns. I know it is sort of news but it is like reporting on every stupid thing that is said about Trump. You could write reams of material on that subject if you cared to but no one will read it but Trump haters.

I hear you, and if you check my archive you’ll see I have been diversifying my work.

But there are times when I feel it is useful to hear what people are saying on the morning show that is most-watched by the political and media elites.

Inspectorudy – There is a very simple way to fix your problem, – don’t read it. The post is clearly labeled “Scarborough”, so skip it.

Personally, I don’t want to listen to the show, but I like the fact that Mark is willing to do so and summarize it. But, there are some days, that I also skip it since the post title doesn’t interest me.

The bill itself sucked. How can they claim to defund Planned Parenthood, if they were only going to do it for a year?? This bill was Obamacare lite, and most of the people I know who voted for Trump, voted for REPEAL, not REPLACE with a few things to make us think it was great, and then BOOM…right back where we started….

Joe Scarborough knows about blowing things. He is a real expert at it. Like when he had that affair with his intern and she died in his office.

And yes, Scarborough and Mike like to stir the Trump pot for ratings. Imagine that.

Gilda is dead. God rest her soul. We have to find comedy where we can.

I have to say I’m not certain this was a failure on Trump or Bannon’s fault. This bill was a real stinker and it was totally Ryan’s baby. They knew the way things stood they had no chance of getting rid of Ryan with a powerplay. So, maybe they just let him run to the end of his chain and break his own neck? Now he’s severely damaged himself and they didn’t lay a finger on him.

There’s a lot of 4D chess going on here that’s all far beyond me. I’m going to hold my criticism and watch how things play out.

notamemberofanyorganizedpolicital in reply to JohnC. | March 27, 2017 at 1:30 pm

You said it JohnC.

This is Ryan and the Never-Trumpers’ Tar Baby………..

conservative tarheel in reply to notamemberofanyorganizedpolicital. | March 27, 2017 at 1:46 pm

notamemberofanyorganizedpolicital in reply to conservative tarheel. | March 27, 2017 at 7:05 pm

You mean Trump was “punking” them?

Why do T-rump suckers lie when the evidence is so plain?

Tom “Gimme Three Steps” Price: “Every single American will have access to affordable coverage that works for them,” said Price on CNN’s “State of the Union,” reiterating one of Trump’s campaign promises.
http://www.newsday.com/news/nation/health-chief-tom-price-defends-gop-plan-to-replace-obamacare-1.13287240

“My first day in office I’m going to ask Congress to put a bill on my desk getting rid of this disastrous law, and replacing it with reforms that expand choice, freedom, affordability. You’re going to have such great health care at a tiny fraction of the cost, and it’s gonna be so easy.”

Now you post ONE place where Der Donald told Ryan or anyone else to bank their fires.

Then again for people with a limited inspect like yourself Rags we’ll just entertain you for the shear fun we get from your blathering, which are only going go get worse over the full 8 year term of Trumps Presidency 🙂

The complete confession of a mindless T-rump troll.

You should never call yourself an American. You disgrace the notion.

Disgrace is your forte, all right.

Your talents would be of more service writing about something else the rest of the time.