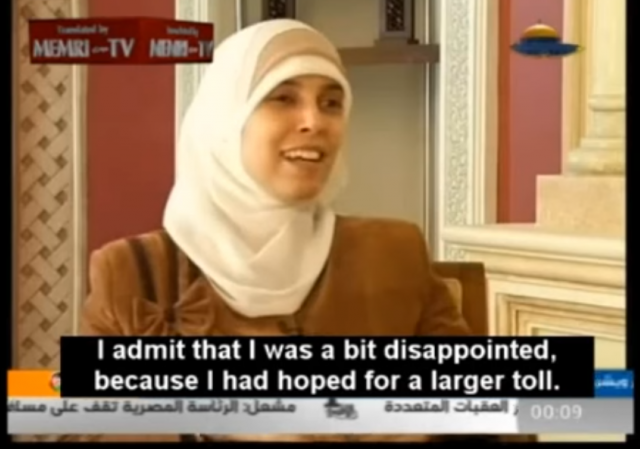 We have documented extensively the ghoulish pleasure Ahlam Tamimi took in murdering children at the Sbarro Pizzeria in Jerusalem in 2001, including great joy when she found out that more children were killed than she previously knew.

Ahlam was released by Israel in October 2011 as part of the Gilad Shalit prisoner deal. She now lives in Jordan, where she works as a television news host.

Recently, a 2013 U.S. criminal indictment was unsealed, based on Ahlam having killed two American citizens among the 15 killed. The Jordanian courts, however, have rejected extradition requests.

Ahlam recently was interviewed by al-Jazeera, and expressed her shock that the U.S. has sought to extradite her:

Ahlam al-Tamimi, 37, never imagined that the quiet life she led for several years in Jordan would be turned upside down when the United States Department of Justice filed criminal charges against her demanding her extradition from Jordan and placing her on the FBI’s most wanted list.

In an interview with Al Jazeera at her home in the Jordanian capital, Amman, Tamimi said that her ordeal with the US extradition request started last September when she was arrested by the Jordanian branch of Interpol while she was driving to visit her parents. After spending one night in jail, she posted bail and started her legal fight against her extradition through Jordanian courts, which ended last Tuesday, seven months later.

When asked why she thinks the US government decided to go after her after all these years, and after she was tried, convicted and served time in Israeli jails, she said: “I was really shocked at the American behaviour.

“The US government, who is always trying to solve the problems of the world, especially in the Middle East, has decided to go after one woman for no obvious reasons.” ….

Ahlam is as mentally pathological as ever, expressing hope in her al-Jazeera interview that the American people will rally around her and let her live in quiet with her terrorist-murdering husband, who also was released in the prisoner exchange:

Since her release from Israeli jails, Tamimi said she has tried to put the past behind her and tries to have a normal life for and her husband. Soon after her release from jail, she got married to Nizar al-Tamimi, 44, a relative, who spent 19 years in Israeli jails for killing an Israeli settler in the occupied West Bank and was released at the same time as Ahlam.

“I would like the American people to look at the case against me as an unjust case and speak out to stand with me and the truth,” she said. “I want to lead a normal life, continue my education and raise a family. All l want now is for the US government to just leave me alone.”

This woman is a perfect example of why Islam will forever be a problem to Western societies. Sharia law says it’s ok to kill the infidel so this woman has no remorse and in fact is still proud of what she did.

Seal Team Six may be the only hope for justice when the courts are unable to perform their functions due to foreign intransigence. Not a great solution, but if done covertly enough a possible way to put the fear of God into godless Islamic Supremacists.

I was going to say, I suggest we up the level of persecution to something in the .308 caliber to .50 caliber range. .338 Lapua would be an excellent middle ground.