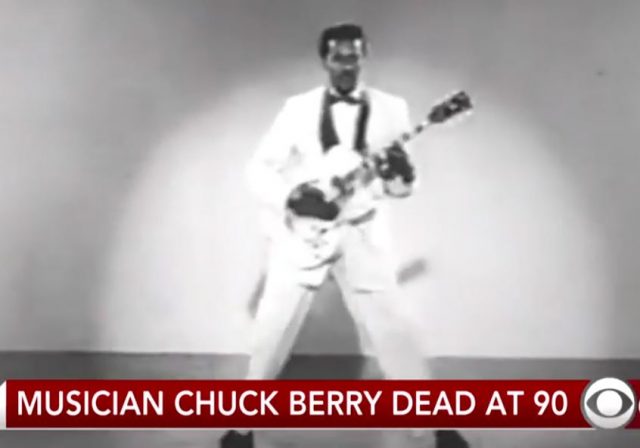 The great Chuck Berry has died at the age of 90.

It was not his most famous song, but I think my favorite is You Never Can Tell, also known as Teenage Wedding and C’est La Vie from 1964 (made popular again in Pulp Fiction, a movie I detest other than the dance scene).

I am so sad to hear about Chuck Berry passing – a big inspiration! He will be missed by everyone who loves Rock 'n Roll. Love & Mercy

The Rolling Stones are deeply saddened to hear of the passing of Chuck Berry. He was a true pioneer of rock'n'roll & a massive influence. pic.twitter.com/RT4NZH3KeQ

When I was 10 years old and I dreamed every night of moving to America, Chuck Berry played the soundtrack. He rocked the world. RIP.

He was great. This makes me sad.

Like many of the greats he supposedly had a dark side. But the side that fed his talent was more than just a once in a generation. It was perhaps once in a century. He not only created much of what become rock and roll. He added to very dimension. Words. Tunes. Soul and spirit.

Happy he experienced 70 or more years of fans rewarding him for his talents.

My uncle knew Chuck Berry very well and booked him many, many times in the 1960s to perform at his club, JD,s—Arizona’s most legendary club.

We’re staying in a hotel in San Diego right now for our daughter’s volleyball tournament. My wife and I were just sitting outside having drinks while we watched a wedding in progress.

While watching the wedding, I thought of my recently passed little sister and how she’ll never see her son get married one day. I couldn’t stop the tears flowing no matter how I tried and my wife took me back to the room.

I logged on and this is the first thing I saw. My uncle Jim, who also recently passed away, had one of his songs posted as the song of the day by Professor Jacobson here on LI a few years ago.

I feel like everyone around me is dying. I feel sometimes like the world I took for granted is dying, or going insane.

I found this recollection on the internet from a patron at my uncle’s club about Chuck Berry:

“1969 JD’s nightclub in Tempe, Az. – Chuck used local musicians including a fine guitarist that I knew named Mike Condello. Mike played piano that night though and Chuck was thrilled with him, as he should have been, even holding his mic. into the piano on Mike’s solos so it could be heard better. Earlier that night, when the opening act was onstage Chuck snuck up right next to me at the bar. He took great delight in my expression of awe when I realized I was standing next to the great Chuck Berry. I enjoyed his prank too of course. A few years later I read his autobiography. where he mentions that he enjoys doing just that!”

Mike Condello was also a good friend of my Uncle Jim.

The world needs more music and less politics. We just lost a soldier in the music army.

Gone are the days.

“Los Angeles, give me Norfolk, Virginia
Five forty-four ten o nine
Tell the folks there it’s the promised land callin’
And the po’ boy’s on the line”

John Lennon was once asked what they (the Beatles) would call their music if they didn’t call it Rock & Roll? He immediately answered, “I guess we’d just call it Chuck Berry!”

R.I.P. Chuck Berry. The world is a better place because of the music you left us.

Nearly 50 years after first hearing Johhny B Goode, I still get goose bumps. I always wanted to play guitar like Check. I’ve always thought he was the true “King” of rock and roll. RIP Mr. Berry, this fan will always love your music.