White rhinoceros is an endangered animal. 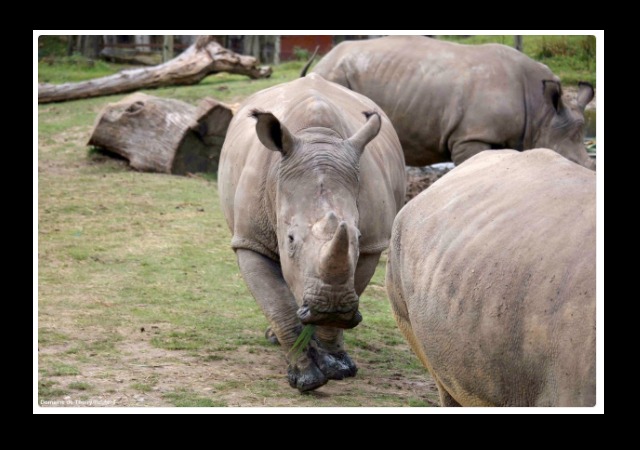 Poachers broke into the Thoiry Zoo in France and killed a white rhinoceros for its horn:

Keepers found the dead animal, named Vince, in the African enclosure of the zoo at Thoiry, west of Paris, on Tuesday morning. It had been shot in the head and its large horn removed with a chainsaw.

The poachers fled before they could remove the animal’s second horn, either because they were disturbed or because their equipment failed, police said.

Authorities described the incident as the first of its kind in Europe.

The poachers forced a grill at the rear entrance to the zoo, near the rhinoceros enclosure. They then broke through two further locked doors into the building containing three white rhino on Monday night.

“It’s possible the thieves didn’t have time to take the others,” a police spokesman said.

Park director Thierry Duguet said the attack was “unbelievable” and that Vince had been one of the most popular attractions at the zoo.

“It’s extremely shocking,” Duguet told 20 Minutes newspaper. “An act of such extreme violence has never happened before in Europe.”

Poachers broke into a zoo in Paris overnight and shot and killed a rhinoceros before cutting off one of its horns https://t.co/UZdYWymL63 pic.twitter.com/xU0NFbN6CP

Yeah, everything is just fine in Europe.
No problems whatsoever…

Black market price for rhino horn is currently about $60k per kilogram.

What’s the over/under for the Muhammad coefficient of the perpetrators?

Well you girls make sure to put some flowers out.

They are letting millions of people in the back door and then shocked that violent crime is surging. While no proof exists (yet) about who the poachers are, I’m sure my profile will prove to be correct.