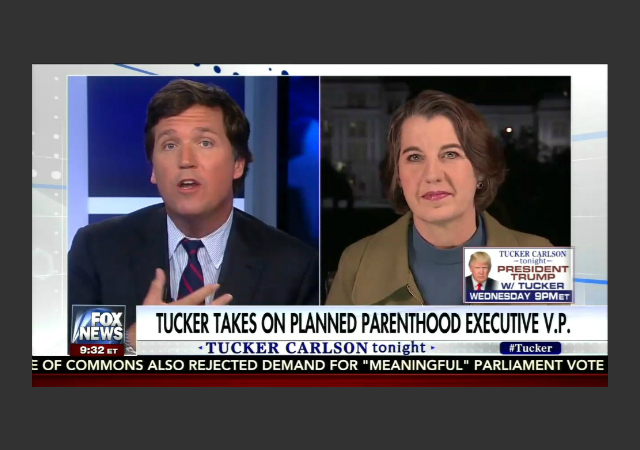 It was the most infuriating, heartbreaking, conversation on abortion this Insurrectionist has seen. On his Monday night Fox News show, Tucker Carlson asked Planned Parenthood Executive VP Dawn Laguens six ways to Sunday how she feels about aborting fetuses after five-and-a-half weeks, at which point the baby’s heartbeat can be heard.

But no matter how he framed it, Laguens refused to answer, hiding behind a series of canned responses about a women’s right to choose, etc. At one point, Tucker said, “I’m asking you a human question, and hope you’ll favor me with a human answer.”

But of course, Laguens wouldn’t. Because she couldn’t. If she had answered honestly—that of course, an unborn child with a detectable heartbeat is a separate human life—she would effectively admit the inhumanity of abortion.

But if she had denied it, claiming such a baby wasn’t a distinct life, she would have painted herself, and Planned Parenthood, as venal deniers of reality. As a frustrated Carlson concluded at the segment’s end: “that was a uniquely shallow conversation, Dawn.”

The Devil wouldn’t even be interested in that woman. She obviously has no soul. It was really creepy the way she smiled and laughed, while talking about one of the most serious topics imaginable.

At some points she kept reverting to the notion of individual freedom and how a choice should be left to the “woman”. I guess I should infer the definition of a human life is a subjective choice, too. Funny thing is taxpayers do NOT have individual freedoms within that worldview.

I put “woman” in italics because it seems PP supports go to great lengths to avoid the term “mother” or mother to be.

This illustrates the moral bankruptcy of the left better than any video I’ve seen.

We should openly admit that leftists are vicious, power hungry, and absolutely immoral. Anytime they use the word “morality” it is only to hide their complete lack of such a thing.

They are not “friends who think differently” – they are enemies of us, of this country, of everything good in this world. They should be treated accordingly.

Tucker should cease giving these abhorables airtime. Waste of every viewers time. One more time with this POS or jemuh greene? and it’s over to the gender challenged girl-boy Madcow on msnbc.

But consider: One can read about such things or hear discussions/reports on talk radio, but decent, moral people are often unable to wrap their heads around evil. An interview like this, where evil is visually personified by someone who looks like their co-worker, their sister-in-law, their childs’ 3rd grade teacher (or as in my case, she’s a dead ringer for my realtor), this allows us to realize that evil is not some snarling, fanged beast that we readily recognize, as our imaginations might suggest. We need to realize that the nice lady across the street who brings cupcakes to the BBQ and has a pro-choice bumper sticker…she may not voice her opinion on abortion to you but she Is in full agreement with this woman. I think more interviews like this are beneficial.

That ‘smug snake’ expression on her face is frankly chilling.

I question the validity of the statistic she used: 1/3 of women had an abortion.

That statistic also jumped out at me. This article suggests the 1/3 is likely overstated.

When we interact with a dishonest person, it’s fair to surmise all their explanations are going to be some sore of lie or
half-truth.

For the past 40+ years feminists and liberals have controlled both sides of the conversation on abortion with terminology. Perhaps it’s time conservative Americans controlled this conversation on the killing of our future citizens.

If only someone would step forward, arresting the woman and the abortionist for MURDER. That would be justice: take a life and you’re charged with a crime, eh? Send them both to prison, that would cause a few to consider other options.

Well, you’re kind of putting the cart before the horse. Since it’s currently legal, you can’t arrest either for it. And the challenge is, getting it made illegal. Even if illegal, I doubt the penalty adopted would be death. Probably more like 1 to 5 years for the mother.

Confirming, yet again, that you can rationalize anything.

You start with false premises and you can get virtually anywhere.

We don’t need any more examples. The 20th Century is quite sufficient.

And every time we have allowed any group of humans to be defined as outside humanity, we’ve always paid a very dear price for it. See Scott, Dred.

I have often said that “pro-choice” was the slickest marketing campaign in the history of the world.

No offense, but why should she?

Tucker is clearly an American treasure. NO ONE on the airways has his courage and tenacity to take these liberals down like he does. While Megan Kelly was eye candy, Fox has hit the jackpot by putting him in her time slot and the ratings are better. Sort says something about substance and how smart their audience is. Keep up the great work Tucker!

If any of the One Percenters who run the disgusting abortion mill Planned Parenthood admitted the truth about the fetus, they would no longer be allowed to enjoy that cushy lifestyle and the constant adoration of them by the Left.

I’m not surprised. A spokeswoman for Planned Parenthood in Florida argued against a “born alive” bill that would require doctors to seek medical care for any baby that survived an abortion.

-Planned Parenthood rep: Decision about whether to save a baby born alive ‘should be between the patient and the health care provider’

– Lawmaker: ‘I think that at that point, the patient would be the child struggling on a table. Wouldn’t you agree?’

– Bill text: ‘An infant born alive during or immediately after attempted abortion is entitled to the same rights, powers, and privileges as any other child'”

If you belong to an organization that is willing to deny the humanity of a child outside of a woman’s womb*, why wouldn’t you deny it while it’s still inside the womb.

*Planned Parenthood later walked this back after they caught a well deserved ration of s***, but it’s important to note that their reflexive instinct is to defend the indefensible.

I’m an abortion absolutist. I don’t even believe in abortion in cases of rape or incest. Because the child is a genetically distinct human being, and is not the perpetrator of any crime.

Now, in the case of rape there are forms of “emergency contraception” that even Catholic hospitals will offer a woman to prevent her from getting pregnant, provided it doesn’t have an abortifacient effect.

I’m all for a woman doing whatever she wants with her own body. But one of the things that should have struck everyone when The Center for Medical Progress released their undercover videos was, those weren’t the woman’s body parts in those trays. Those hearts, lungs, eyeballs, brains, etc. belonged to someone other than the woman.