Another reason trust in the media is at an all-time low.

The Washington Post ran a story last night continuing the media effort to brand everyone in the Trump administration to be incompetent at best, and creepy to boot.

This time the target was Secretary of State Rex Tillerson.

In the article, based entirely on supposed anonymous sources, WaPo asserted that Tillerson is so weird he doesn’t even let career diplomats make eye contact with him, Secretary of State Rex Tillerson spends his first weeks isolated from an anxious bureaucracy (emphasis added):

Secretary of State Rex Tillerson takes a private elevator to his palatial office on the seventh floor of the State Department building, where sightings of him are rare on the floors below.

On many days, he blocks out several hours on his schedule as “reading time,” when he is cloistered in his office poring over the memos he prefers ahead of in-person meetings.

Most of his interactions are with an insular circle of political aides who are new to the State Department. Many career diplomats say they still have not met him, and some have been instructed not to speak to him directly — or even make eye contact.

While there were many people who immediately called bullshit on that claim, WaPo weaponized the remainder of the media and social media to create the impression of Tillerson as having a defective personality.

But that little tidbit caused Tillerson’s name to trend on Twitter late Thursday with more than 20,000 tweets weighing in, and many were wondering just what was up with America’s top diplomat.

Not addressed, of course, is how Tillerson managed to rise to run one of the largest multinational corporations in the world if he is so insulated from those who work for him.

One of the most important voices disputing this account was the Associated Press diplomatic correspondent, who tweeted not only that it was not true, but that he knew it was not true because he knows people at State who were hired prior to 2009. Get it — the AP diplomatic correspondent suggested that Obama hires were behind the rumors spread to WaPo. 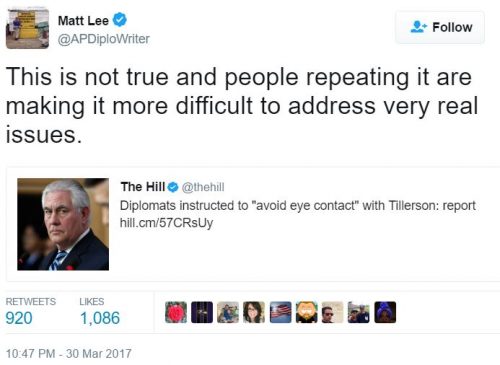 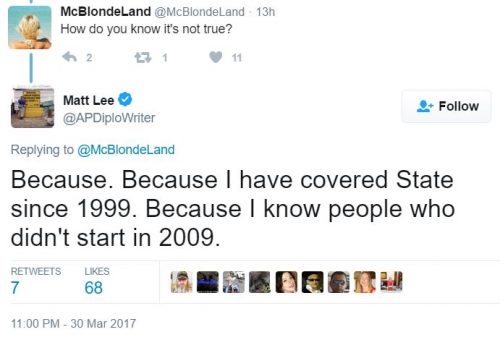 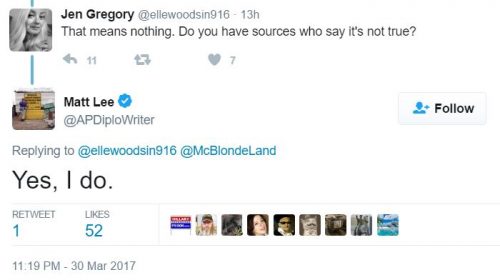 None of this has stopped the spread of the original false story. As of two hours ago The Hill was still tweeting the headline: 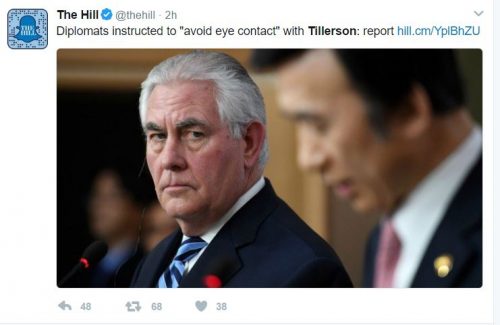 Compare how viral tweets repeating the WaPo claim have gone, compared with the push back by the AP diplomatic correspondent. 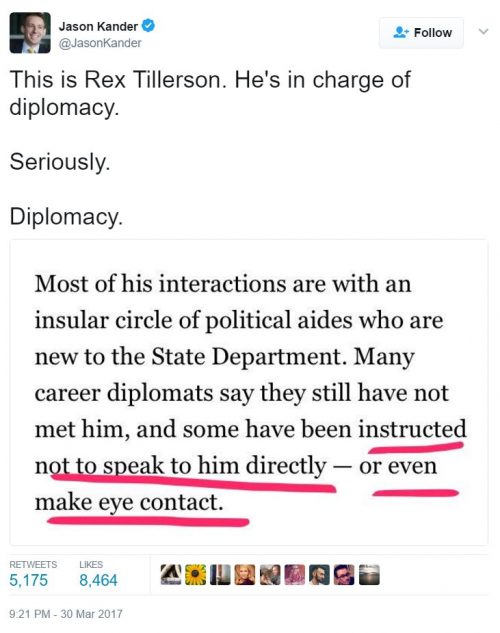 For WaPo, which makes no bones about its hatred of the Trump administration, it’s mission accomplished. They have created a meme that will live on.

It also explains why trust in the media is at an all-time low.

Good thing they didn’t spill the beans about that Secret Service barber who trims Tillerson’s devil’s horns down every morning so they don’t show.

He turned me into a newt.

notamemberofanyorganizedpolicital in reply to Leslie Eastman. | March 31, 2017 at 1:37 pm

“Social media influencers – like Instagram stars or YouTube celebs – often promote products they like, either as part of a brand relationship or as means of generating income through affiliate sales. Now, Amazon is looking to get in on this action as well. The company has quietly launched the “Amazon Influencer Program,” which is currently in beta testing as of a couple of days ago. Similar to the Amazon Affiliate program, the new program will offer influencers commission on products sold, but is not open to the public.”

Personally, I would never trust Jeff……..

Are they confusing him with the Pig in a Pants Suit? I recall people weren’t allowed to talk to her or look her in the eye either (although in her case, she would turn you to stone if you did) when she was renting out the Lincoln bedroom.

Isn’t it funny how the leftist, lame-stream, fake news media consistently (but falsely) accuses members of the Trump Administration of conduct that their darling left-wing politicians have actually engaged in?

I don’t want to be a complainer, but not only are pigs smarter, but that’s where bacon comes from. Maybe she should be a jackass instead.

Was the SOS’s office described as “palatial” when it was occupied by Clinton or Kerry?

Kerry should certainly know all about palatial digs as he get to enjoy palatial homes in Boston, Nantucket, Idaho and elsewhere thanks to his second wife’s first husband’s fortune.

They self-project what they really are – just like their Democrat Party owners…….

None of this has stopped the spread of the original false story.

Once again, a demonstration of the old saw that a lie will get half-way around the world before the truth gets its pants on.

The same “The Hill” that is propping up “Pepsi Chelsea” Clinton (“The choice of the new generation”) for a future political career?

The private elevator probably has been there forever and has been used by many people because of security reasons.

About reading stuff – it is generally faster to read, easier to make notes on the side and he probably has a lot of detail to catch up on. I think it’s good that he is blocking out several hours in a day to read. In fact, I wonder what changes he is going to propose after all the research.

The same hysteria is around the Pence dining out “rule”. Comments that I have seen is that the younger commentators are upset about this apparent lack of freedom while older, managerial types are saying that they agree to always have a witness available. Of course, any young male in college who has been accused of sexual misconduct probably approves of the Pence Rule.

I’ve started reading the printouts of the press briefings – https://www.whitehouse.gov/briefing-room/press-briefings – since listening to them would probably result in a few broken TVs or laptops. Even reading the reports drives my BP up.

Final thought – the Sean Spicier twitter is a good way to get some laughs. https://twitter.com/sean_spicier Amazing how many people cannot read and realize that it is a parady account.

About reading stuff – it is generally faster to read, easier to make notes on the side and he probably has a lot of detail to catch up on. I think it’s good that he is blocking out several hours in a day to read. In fact, I wonder what changes he is going to propose after all the research.

Exactly. One of Trump’s key selling points is reducing unnecessary and over-burdensome regulations. You can’t learn the regulations and weed out unnecessary ones unless you research them all. For normal people, that means reading. A LOT of reading.

I, too, am eager to see what comes of all his research. And what goes.

First of all, this is a re-cycle First Lady Hillary R. Clinton story. Everyone in the White House was instructed NOT to talk directly to the FLOTUS or make eye contact with her. Maybe he’s just shy.

The Secretary surrounding themselves with their own staff is EXACTLY what HRC did when she was SecState. She also took her private elevator to the same palatial office. However, the things she read were directly connected to the Clinton Crime Family and how to hit up international leaders for $$.

John Kerry took the private elevator to his palatial office in the Iranian HQ in Tehran.

A person with the responsibilities of that office does not have time to meet with legions of people. He’ll get more done by reading their briefing papers. He can mark the for follow up etc.

I would not trust anyone in the entire State Department.

This is just laughable, ESPECIALLY considering the dozens of stories about staffers that were cursed out by Hillary Clinton for daring to speak to her or make eye contact with her.

So, the Washington Compost is at it again. I wonder if they sit up at night thinking up lies, or does it just come naturally?

It’s the Washington Post who have declared war on anything related to the Trump administration! HACKS the entire bunch!

Take a look at Tillerson’s speech on his first day at State.

Hardly the devil as describe by the post.
I am so sick of the hacks that work there.

This is an awesome rumor and we should take it to the next level. In the next meeting with his counterpart in Mexico, Tillerson should just stand there and glare at him. Then when the guy asks “what are you doing?” he replies “Stealing Your SOUL!!!”

Anymore when I’m on a site arguing over politics and someone uses wapo as a resource I just reply with Fake News. Didn’t Prof just have another story last week on one of their fake stories? There is no such thing as a reporter at wapo, it’s all supermarket tabloid trash there.

“Trust in media at an all time low.”

How can you go lower than zero?