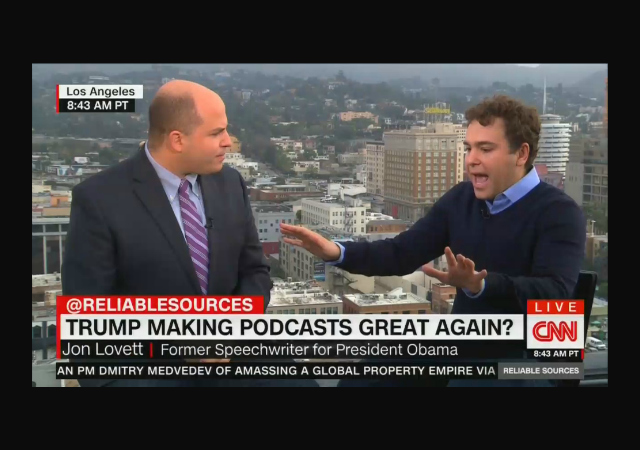 About the last accusation you’d expect to hear leveled at CNN is that it is too accommodating to Sean Hannity and Donald Trump.

But that’s the charge that former Obama speechwriter Jon Lovett has made.

Appearing on Brian Stelter’s Reliable Sources on CNN today, Lovett first praised Stelter as a “bulwark,” noting “you go after Hannity on your show.”

Lovett then turned the tables, claiming “but then you turn on CNN, and Hannity’s got a little beachhead on half the shows on this network.” Lovett’s beef was that CNN panels include Trump supporters he disparages.

Lovett lamented that “so often on CNN, there’s a world-class journalist interviewing campaign rejects and ideologues.” Yes, it must be so painful for world-class Chris Cuomo having to stoop, for example, to interview Georgetown/Harvard law alum Kayleigh McEnany.

BRIAN STELTER: On your new show, Lovett or Leave It, the first show came out on Friday, some of the cable news critique was in that episode.

JON LOVETT: It did come up.

STELTER: So if you could change one thing about this, about this format, what would it be?

STELTER: You don’t have to say that. Skip that.

LOVETT: I’ll skip it. Look, heres’s an example. You go after Hannity on your show. You say he’s intellectually dishonest. He doesn’t care about the truth. He doesn’t care about what his audience cares about, right? Then you turn on CNN and Hannity’s got a little beachhead on half the shows on this network. You turn it on and there’s a big, giant panel —

STELTER: You mean Jeffrey Lord and Kayleigh McEnany and other Trump supporters.

STELTER: What does it help you to insult Trump supporters like that?

LOVETT: I’m not calling the Trump supporters stupid people. I’m calling the people that CNN puts on television are terrible representatives of the views of conservatives, they’re terrible representatives of the kind of politics we should have. I mean, these are not intellectually honest people. These are people building a brand. These are people willing to say anything.

And the same criticism you direct at Hannity you could direct at the people that CNN puts on the air. I mean, I’ve said this before but I think it’s true. So often on CNN, there’s a world-class journalist interviewing campaign rejects and ideologues and silly, craven people who do not care about informing people, that aren’t there to help people understand what’s going on in the news.

How did these people get mistaken for Americans?

Never mind liking each other, could we return to the times when most Americans loved the country?

notamemberofanyorganizedpolicital in reply to mariner. | March 27, 2017 at 2:26 pm

Jon Lovett is a failed comedian isn’t he?

“Lovett’s beef was that CNN panels include Trump supporters he disparages.”

And this surprises who?

It is the left, the left, which time and time again wants to shut down speech. And Muslims are very much a part of the left.

Think Charles Murray. His is only a recent example. This goes on and on.

Comments are weird lately. I can comment today (first time in at least a week) but can’t uptick. Is the UN messing with us?

notamemberofanyorganizedpolicital in reply to rabidfox. | March 27, 2017 at 2:26 pm

This guy is desperate to restart the liberal media monopoly that is clear. The entire media is corrupt so he wants to disqualify anybody that wasn’t corrupted and the old way of doing that was you didn’t work for the three letter networks. He is almost in a panic that his “bullshit factory” is being exposed that was pretending to be media.

notamemberofanyorganizedpolicital in reply to Conan. | March 27, 2017 at 2:27 pm

You, Conan, are spot on about that!