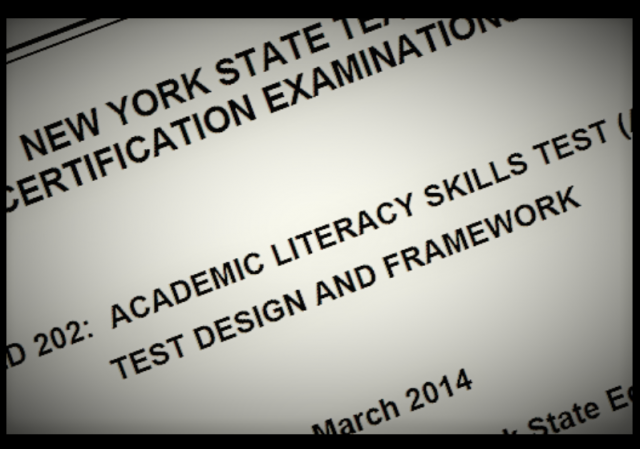 New York State has been trying to raise teacher standards in order to solve the problem of low graduation and literacy rates in minority school populations.

That makes sense – how can an academically unqualified teacher be expected to help raise academic success among students. These increased standards were meant to help minority students by ensuring that qualified teachers were not limited to wealthier districts.

One of the key components of the push for higher teacher qualifications was a literacy test. The test is just one of several tests prospective teachers need to pass. That literacy test survived a court challenge in 2015.  A federal judge found that the test, unlike prior tests, was not discriminatory:

… Judge Wood ruled that the state and Pearson, the testing company that helped devise the exam, had done a proper job of making sure that the “content of the ALST is representative of the content of a New York State public-school teacher’s job.”

Yet that has not stopped claims that the test is racist based entirely on the tests results, which Black and Hispanic prospective teachers passed as lower rates than whites.

The tests, however, came under intense scrutiny for their alleged racial bias, after just 46 percent of Hispanic test-takers and 41 percent of black test-takers passed it on the first try, compared with 64 percent of white candidates.

The Test Design summary describes the components, with the key components reading and writing.

So the NY State Regents, the government body that controls public education in NY State, has voted to scrap the test.

The NY Times misleadingly includes the claim of discrimination in the title, Regents Drop Teacher Literacy Test Seen as Discriminatory:

The Board of Regents on Monday eliminated a requirement that aspiring teachers in New York State pass a literacy test to become certified after the test proved controversial because black and Hispanic candidates passed it at significantly lower rates than white candidates.

The Regents also moved forward with a proposal that would allow some students who failed another test, aimed at evaluating practical skills like lesson planning and assessment, to be certified as teachers based on their grades and professors’ recommendations.

Together, the steps signal how much the Regents’ approach has changed under the current chancellor, Betty A. Rosa, after several years of efforts to raise the bar for entering the profession.

The webpage for the literacy test now has a Notice that it no longer applies: 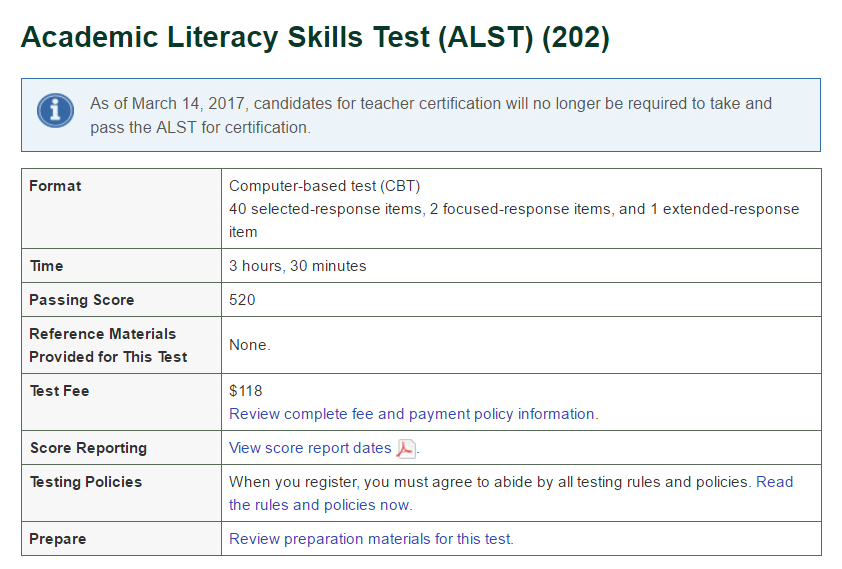 The victims of this move will be minority students. National Council for Teacher Quality (NCTQ) President Kate Walsh released this statement:

“Getting rid of this recent licensing test is a big step backwards, not just for New York but for the country. This test, first implemented in 2013-14, put the academic needs of students above the employment interests of teachers. Rather than lowering standards by removing the Academic Literacy Skills Test, we should work to educate future teachers to reach this level. Otherwise, it is our students, especially those from traditionally disadvantaged and minority backgrounds, who will suffer most in the long run.”

Scraping non-discriminatory, relevant testing is part of a trend that has been going on for a long time. Just recently, Harvard Law to Accept Applicant GRE Scores in Place of LSAT for Diversity.

Where does it stop when equal opportunity no longer is that standard, and “fairness” becomes racial quotas in the name of diversity?

Who wouldn’t want their children being taught by an insufficently literate instructor? Oh right, every parent who cares.

As the test’s goal is to address the academic shortcomings of minority students, the fact that minority teachers (who were minority students at one time) fail at a higher rate follows logically and is not evidence of racism.
But logic is irrelevant to the race hustlers.

So how do you ‘synthesize’ an idea? And why should a sub-college level teacher produce ‘complex and nuanced writing’ anyway? And how do you explain a test that flunks *half* of the (college graduate) teachers taking it?

I want teachers who can communicate. I want them to use simple and straightforward language that the students can understand.

Keep dumbing it down and better results will surely follow.

We should look at this from the schools point of view – they’re just hiring people to run big-kid daycare centers, how much actual literacy does anyone need for that? The employees just need to be able to pick up all of the crayons and put them in their boxes at the end of the day, and hopefully try to keep them from smoking drugs while they’re in the classroom.

notamemberofanyorganizedpolicital in reply to georgfelis. | March 14, 2017 at 2:58 pm

“Teaching” is nothing more than “good communicating.”

That is why people who may be brilliant in their field, very often can’t “teach.”

Because they can’t relate to the other side of the interface to others.

Milwaukee in reply to notamemberofanyorganizedpolicital. | March 14, 2017 at 6:30 pm

To be specific, the ability to communicate >asymetrically< is important for a teacher, because communicating peer to peer is often easier than breaking those complicated ideas down into simpler ones for younger audiences.

Having a kid in MOST monopoly government schools is a from of child abuse.

Even some private schools. Parents have to stay engaged.

The policy of lower expectations is an insult to human dignity, sabotages development, undermines opportunity, and endangers the lives and welfare of people served by certified individuals.

That said, [class] diversity is institutional racism. It is a Pro-Choice policy that discriminates between individuals based on the “color of their skin”.

This reminds me of all that hullabaloo a few years ago over fire department written exams in (I believe) Boston. The Left used their contrived, yet, powerful “when all else fails” tool of imagined racial grievance, “disparate impact” theory, to allege that the test was discriminatory, because the passing rate for blacks was far lower than that for candidates of other races.

I’m surprised this passed court challenge the first time. After all, how is it different than Griggs vs Duke Power? Never mind that it was a horrible decision that harmed the nation immensely … it was precedent.

One of the Griggs rulings was that an employment test had to be job-related. The court ruled several years ago that the ALST was job-related.

The goal is a slush fund & secure voting block for the DNC not the education of children.

georgfelis, it is well established that the children of professional parents enjoy a huge advantage in school because they acquire a rich vocabulary and can understand complex syntax. They get this by osmosis from their parents. How can this inequity be addressed other than to ensure that teachers from the earliest grades have a mastery of standard English?

Yet liberal teachers (but I repeat myself) often refuse to teach American, or European, history. They think it’s racist. I read one manifesto by an English teacher who preferred to teach her black students East African oral tradition.

She’s an English teacher. She refuses to teach English.

It’s impossible to teach students the language unless they’re taught both English and the subject matter that is discussed in English. The two go hand-in-hand. Teachers fail in both departments.

I’ve had college teachers who had complex and nuanced understanding of their subject, but were totally unable to convert that into simpler language for us to understand. They could speak High Mathematics to their fellow peers, but when it came to descending into the vast unwashed masses to do some washing, they lacked the soap and water. In the inverse, I’ve had graduate students who were frantically reading ahead in the chapter to keep in front of the students teach *perfect* classes.

So what happens if you have amateur parents?

If you disagree, you’re a competency-ist.

The best college professor I ever encountered—best in at least the sense of clarifying difficult concepts to a lecture hall full of sleep-deprived undergraduates—was black. Not just black, but Black. Complete with ethnic hair, bizarre office furniture, and eccentric (albeit stylish) clothing. But damn, could he teach continuum mechanics.

The pernicious idea that certain special classes of people simply can’t be expected to master at least minimal competence in the same fields as whites is just disgusting—to my antedeluvian way of thinking, perhaps modern liberalism’s greatest crime of all.

Thank goodness for homeschooling. We have the opportunity to “smarten up” our children, not the command to “dumb down”. Our then-five year old, when confronted with a church overflowing with people, said, “Mom, there are a myriad of people here.” How many people taking this test would even know what that means? I’m saddened for the next generations of children, if this lack of intelligence is what they will encounter in some of their teachers,

Well dang, I’m getting confused again. We’ve been assured that the only thing holding these schools back is the lack of adequate funding, but now we find out they’re so focused on ‘diversity’ that they’re hiring people who are illiterate? WTF?

I’ve taken the literacy test for teachers. The top 25% of my 8th class would have passed with flying colors. The next 25% would have passed, too, although with a smaller vocabulary score. Some of the bottom half would have squeaked by if there was an incentive for them to do it. I know some prospective teachers who failed. There’s a place for them in the fast food business.

I have seen numerous actual responses to the ALST writing assignment by actual candidates. Any sane person would be appalled by the number that approach functional illiteracy. Some of these candidates would struggle to write a lucid note home to a parent.

What do you have to know to teach a horse?

Why not give remedial help, rather than scrapping the test and bring down the quality of the entire job pool? Getting rid of the teaching literacy test is like getting rid of the drivers test. it’s telling parents and students that the school district in the state care more about teachers feelings and unions then about students.

This makes perfect sense, if you believe the purpose of teaching jobs is to be a welfare program for non-whites rather than as a means to educate children.

And after teachers boost diversity, especially in NY law schools, they can follow the lead of CA when passing rates for the state lawyer bar exams start plummetting.

This wouldn’t be the first time the CA State Bar reduces standards rather than demand improved education standards from law schools.

Diversity is not an end in and of itself. It should be the result of the increased success of various social groups (be it race, ethnicity, sexual orientation…) as whatever perceived barriers are removed and THEY PROVE THAT THEY ARE JUST AS GOOD!

Isn’t reducing standards reinforcing any claims that some people just aren’t “equal” to others? The very reason we have standards in the first place is to weed out those who are “less equal” in some way so that we can allow those who excel to move forward while those who are not up to speed look for something else to do.

So do we want good lawyers or do just force everyone to hunt through diverse choices to find the most capable lawyers? All lowering the standards does is to allow the substandard to fail as lawyers instead of failing as students.

I would add that failing lawyers hurt people. Failed students only hurt themselves… temporarily.a