The young brides wanted to populate the new state. 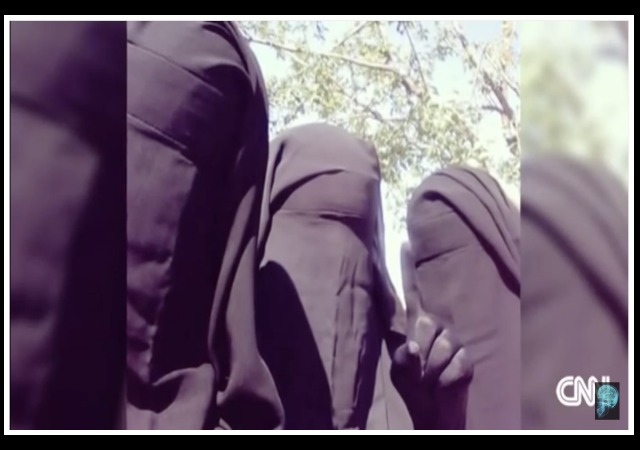 As the Islamic state (ISIS) retreats from Mosul, Iraq, more locals have spoken out about life under the terrorist group. ISIS captured Iraq’s second largest city in the summer of 2014.

OB-GYN Dr. Fatima Khaleel spoke with The Sunday Times about the females she treated in Mosul, noting most of them desperately wanted to get pregnant by ISIS fighters to breed caliphate cubs.

Stories have circulated since Mosul fell to ISIS, but this is one of the first hand accounts from a doctor who had these females as patients:

“I had a lot of Isis wives come,” Khaleel said last week, 50 miles east of Mosul, where she fled after Isis was driven from the eastern half of the city in January. “British, French, Russian. They wanted to get pregnant.”

Khaleel said the brides came to her with all the same features: “their faces were covered, they were armed to the teeth and they were desperate to get pregnant.”

These females also received free healthcare since they belonged to the high levels of ISIS.

Each wife arrived at Khaleel’s clinic “with an entourage — sometimes carrying Kalashnikovs slung over their black robe-like abayas.” From The Sunday Times:

“All Isis wives have the right to shoot at any time,” Khaleel said. “They all had guns in their bags or in their pockets. I was so scared. These foreigners follow the rules of Isis 100% more than people from Mosul.”

This meant the employees in the clinic lived in fear because one disappointed patient could lead to death:

“We knew they could cut our heads,” said one of her colleagues. “Once, I tried to treat a woman who couldn’t get pregnant, but it didn’t work.

“I was taken to the Isis security office and they asked me whether I was intentionally stopping her from conceiving. I was so scared but I denied it. They let me go.”

Another doctor described the wives as “crazy” as one shouted “Allahu akbar, Allahu akbar” as she gave birth.

The doctors explained that they hated ISIS, but that wouldn’t stop them from treating patients because “[H]umanity comes first.”

Plus, they knew many of these young females did not understand the seriousness of their choices:

The doctors, almost all of whom were highly qualified and spoke English, saved lives. Many of the foreign brides were young first-time mothers who spoke only rudimentary Arabic.

“Four months ago a British girl came,” Khaleel said. “She was around 24 and had blonde hair and blue eyes. She was at the full term of her pregnancy, but she had a miscarriage before. I spoke with her, and she tried to google-translate some Arabic words on her phone.”

Yet, in this environment, one has to put themselves first to survive. Yazidi girls, who ISIS kept as sex slaves, would come to the clinic in tears, begging for contraception.

One doctor cried as she told The Sunday Times she could not help them because it could get her beheaded:

“One said she was a sex slave. They were crying. They begged us, but we couldn’t help them. We didn’t have anything, and we were afraid they were trying to trap us. If the girl wasn’t really a slave I would have been beheaded.”

As Mosul slowly regains independence, citizens have chosen to leave. But doctors like Khaleel and her staff want to stay behind for those who choose to stay:

“A lot of people left when the city was liberated. They survive,” one doctor said, straightening her lab coat. “But I have to stay. Where else will my patients go?”

It appears that a lot of ISIS brides achieved their quest. Last March, The Quilliam Foundation, a UK think tank, discovered that 31,000 of the brides were pregnant.

ISIS used social media and internet platforms to lure females to its caliphate as a way to populate the terrorist group:

“ISIS is recruiting these women in order to be baby factories,” Mia Bloom of the Center for Terrorism and Security Studies at the University of Massachusetts Lowell said in September 2014. “They are seeing the establishment of an Islamic state and now they need to populate the state.”

Apparently, feminists in the USA can’t be bothered to organize a ‘Day without Sex Slaves’ protest.

31,000 dedicated babies to destroy the West. We had better get serious about the threat of this movement and start calling it something besides Muslim extremeism. More important is what the hell are we going to do about it?

There’s a bright side – in 13 years, that’s 31,000 teenagers who will hate their mothers and want to kill their fathers for abandoning them.

And we should also point out that this is nothing new, it’s actually something quite old. Every invading army in the middle east has done this since Alexander the Great’s time, at least, and probably long before him.

As others have pointed out, this is not “Islamic extremism”. This is Islam.

There are no “moderate Muslims”; the ones who try to be moderate are officially apostates, and will be killed just as if they were infidels.

What do we do about it? I don’t have a good answer for that one.

No, there are moderate Muslims. They practice a folk Islam, not based on careful study of their core texts. Up until fairly recently, before the internet, most of the core texts simply weren’t available and people understood their Islam to be whatever their prayer leaders and Sheikhs told them it was.

There is no moderate Islam. It’s laid down in their Quran and their original canonical tests, Sunni and Shia. Islam is extreme. Many Muslims are not. Many Muslims are shocked to find out what their religion commands them to do. They’re hearing it for the first time.

But when the Islamic State or Hezbollah

Sort of like what happened to Christianity the first time the Bible was printed in another language besides Latin.

“So when you see standing in the holy place ‘the abomination that causes desolation,’ spoken of through the prophet Daniel—let the reader understand—…”

This is the real version of “Handmaid’s Tale”, unlike the anti-Christian/anti-American tripe that was published.

It’s easy if you’ve got the nerve. Pull out a koran, ask them to tear a page out of it and wipe their ass with it.

Make their sammich a BLT.

“But I have to stay. Where else will my patients go?”

I suppose that’s what “liberty” is—the freedom to choose which ridiculous cross you’ll nail yourself to.

By “patients”, he’s not just referring to the ISIS brides. He’s also talking about the Yazidi sex slaves.

If he leaves, who else will treat them as anything other than sub-human breeding stock and administer medical care accordingly?

“I was taken to the Isis security office and they asked me whether I was intentionally stopping her from conceiving. I was so scared but I denied it. They let me go.”

I would have turned this around on those who accused me.

Sahih Muslim – The Book of Marriage – (22) – Chapter: The ruling on coitus interrupts (‘Azl)

“Abu Sirma said to Abu Sa’id al Khadri (Allah he pleased with him):

“0 Abu Sa’id, did you hear Allah’s Messenger mentioning al-‘azl? He said: Yes, and added: We went out with Allah’s Messenger on the expedition to the Bi’l-Mustaliq and took captive some excellent Arab women; and we desired them, for we were suffering from the absence of our wives, (but at the same time) we also desired ransom for them. So we decided to have sexual intercourse with them but by observing ‘azl (Withdrawing the male sexual organ before emission of semen to avoid-conception). But we said: We are doing an act whereas Allah’s Messenger is amongst us; why not ask him? So we asked Allah’s Messenger, and he said: IT DOES NOT MATTER IF YOU DO NOT DOT DO IT, FOR EVERY SOUL THAT IS TO BE BORN UP TO THE dAY OF RESURRECTION WILL BE BORN.”

“It’s BLASPHEMY to say I can prevent a woman from conceiving if Allah wants her to conceive. Is this man saying I’m more powerful than Allah?”

We’re talking Sunni terrorists here. They can’t deny the Sunnah, which these days mostly consists of the ahadith. Maybe because I’m detached but I’d like to see these guys squirm when they get caught out, taking the “moral high ground” (context, people, context) that not even they think their own Allah is the all-powerful being in the universe. Even a lowly Mosul physician can thwart Allah’s plans.

What kind of god do these IS animals serve, if a single Mosul physician can overpower it?

By the way, I’m a Christian. And my God is big enough to take a joke. Like a cartoon.