MIT Media Lab to Give $250K Award for ‘Responsible Disobedience’

MIT Media Lab to Give $250K Award for ‘Responsible Disobedience’ 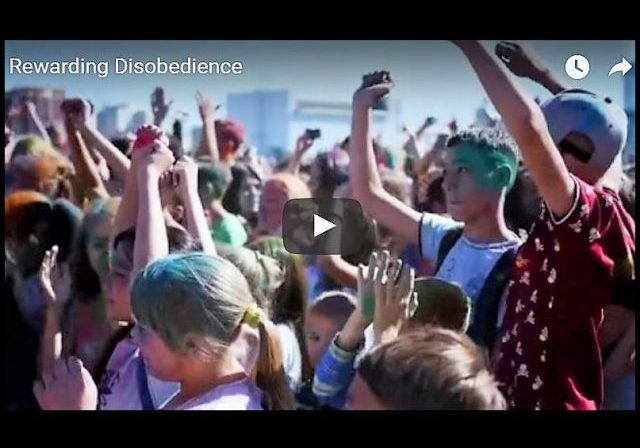 This is an interesting concept. It seems to be all about getting people to innovate by thinking outside the box. More specifically, by disobeying existing rules and norms. It’s also open to multiple disciplines which could make choosing the winner a bit difficult.

The announcement was made this week on the MIT Media Lab website:

On July 21, 2016 we announced the creation of a $250K cash prize award for responsible disobedience. This idea came after a realization that there’s a widespread frustration from people trying to figure out how can we effectively harness responsible, ethical disobedience aimed at challenging our norms, rules, or laws to benefit society…

Specifically, we’d like to call out action that seeks to change society in positive ways and is consistent with a set of key principles. These principles include non-violence, creativity, courage, and taking responsibility for one’s actions. We’re seeking both expected and unexpected nominees. This could include–but isn’t limited to–those engaged in scientific research, civil rights, freedom of speech, human rights, and the freedom to innovate.

Of course, there is a risk that this could simply devolve into a social justice competition. As you’ll see in the promotional video below, Van Jones and other progressives are really into the concept of the contest.

CNN goes out of its way to note “protesters” in the streets when reporting on this while quickly pointing out that the award was conceived months before the election:

MIT has created an award for rule-breakers. The university’s Media Lab announced this week it will award $250,000 to a group or individual for disobedience.

“You don’t change the world by doing what you’re told,” according to Joi Ito, the director of MIT’s Media Lab.

“This idea came after a realization that there’s a widespread frustration from people trying to figure out how can we effectively harness responsible, ethical disobedience aimed at challenging our norms, rules or laws to benefit society.” the department’s website says.

Protesters have taken to the streets often in the last few months — from the Women’s March to Standing Rock — but Ito is quick to explain the award is not a response to the the current political administration. The award was conceived last July, he said.

If this competition produces a real and useful invention or innovation in learning, that will be great. If it merely rewards a leap forward in protest culture, that will be a major disappointment.

It’ll be fascinating to see what is ultimately offered as serious contenders.

Other than removing Trump from Office for the sin of saying things the Left does not want to hear, what exactly do all of these protesters want? Is it that they demand we replace Trump who says insulting things with Hillary who is a well documented criminal that remains above the law? If so, then they are protesting how the election process works and are clearly making the statement that they will support our government and processes only if their candidate is elected, but should their candidate not be elected, then they are justified to do all they can to support a coup.
>
This is not disobedience; this is nothing but a rabble who are demanding their own way and if they do not get it then they will create all sorts of problems. It is nothing less that the SJWs and the fragile buttercups/snowflakes writ large. They are no different from any 2 year old who does not get their way and will then throw the mother of all temper tantrums in an effort to get mommy and daddy to acquiesce to the child’s demands. The question is how do we stop this childish behavior in our so called responsible adult population before everything truly gets out of hand?

The progressive fascists believe that they are doing good and that justifies what ever they have to do to achieve their goals and makes any who oppose them evil. They share this ends justify the ends philosophy with Nazis, Communists, Muslims and all fascist movements. It is more than likely that they will resort to mass murder and oppression of their enemies. You can see that in every insane statement of the Progressive Fascists since Crooked Hillary lost.

Possible results: Lots more leftists and other crazies seeking to cross (and erase) the last few remaining lines that a reasonable society might have.

“These principles include non-violence, creativity, courage, and taking responsibility for one’s actions. We’re seeking both expected and unexpected nominees. This could include–but isn’t limited to–those engaged in scientific research, civil rights, freedom of speech, human rights, and the freedom to innovate.”

That sounds remarkably like being a conservative. Certainly the antithesis of your SJW.

Taken on those values, this could be a very positive program. When we think back on the history of science and medicine, we owe a great deal to those who disobeyed the “accepted wisdom” of their era.

And, at the logical conclusion of the drives toward a statist utopia, the only thing that would prevent us all being slaves would be our own willingness to disobey.

Our republic exists because of disobedience. Only pointing out how it extends beyond science and medicine.

One thing that is consistent with the Progressive Fascists is avoiding responsibility for their actions. Just look at Tyrant Obama the Liar, Crooked Hillary and BJ’s careers of lies and evasions.

The optimist in me is hoping that many submissions include the fight against the tyranny towards free speech on the very campuses of the academe. Perhaps even the award goes in that direction.

The realist in me (cynic?) expects the winner to make the progressive hard left proud. Something “out of the box” in theoretical advancement of the already ubiquitous SJW noise we hear.

Specifically, we’d like to call out action that seeks to change society in positive ways and is consistent with a set of key principles. These principles include non-violence, creativity, courage, and taking responsibility for one’s actions.

Send the check made out to rinardman, to:
BEHIND THE HOT WATER PIPES
THIRD WASHROOM ALONG
VICTORIA STATION

The Left sure wastes money on a lot of stupid things.

The only thing which raises alarms is the size of the award. A quarter of a million dollars is a yuge sum; they usually don’t trust the Dept. of Architecture (the Lab’s home base) with that sort of mad money. Meaning that some particular financial source is behind this, and possibly driving it.

The Lab is generally concerned with things like ultra-cheap Internet terminals to be distributed by satellite or carrier pigeon, or ultra-large networks scalable to spacecraft or planetary bases, or general man/machine interfaces; very tech-y stuff, and to get anywhere with that takes money, as the latest tech-y hardware isn’t available at clearance prices. But this award isn’t to fund such research, it’s to help it pay off after completion. And that makes it less useful as a research tool.

And that raises my suspicions. At one time I funded such things myself … but not to the tune of $250k. Lop off a few decimal points, and you have enough for motivation where it’s needed, but not for serious support after it’s not needed. But that is probably not what $250k is intended to do.

Though suspicious, the amount is well chosen. An even million would come across as a stunt; something some goof like Branson or Musk would do. A quarter of that is serious money but not in cartoon territory. Again, very MIT-ish.

My exposure to the Lab’s members from what I’ve seen in public suggests to me they are well funded, so the amount isn’t that abnormal in my opinion. The purpose seems extraneous. So maybe the source might be, as well.

I doubt companies like Samsung or Northrop see any benefit to their bottom lines, for example. But any one of them might be trying to buy SJW credits, so to speak. Especially Comcast. (Those are just companies I recall from memory as participants.) And what stands out to me is how it is promoted as purely action without reference to methods (e.g. communication, use of technology, etc.)

In theory, it’s a good idea but in practice the Leftists who run college campuses are totally oblivious to the taboos and norms imposed by their orthodoxy. Thus, you can be pretty confident that this award will NOT go to the professor who writes a well-reasoned essay disapproving of homosexual behavior. Or who researches the link between race and IQ. Or who advances the hypothesis that most male transexuals are fetishists. No, this award will go to yet another pretend underdog who has the full backing of the Left.

notamemberofanyorganizedpolicital in reply to sabril. | March 11, 2017 at 1:10 pm

You forgot your snark tag for your dry humor.

AG Sessions: where are your indictments of Soros and his mob?

if a RIOT happens from MIT Media Lab’s supported socialist justice event..can/will the victims of said riot sue / collect damages from MIT?? Will Prosecutors Charge MIT as co-conspirator or like other felonies charge as complicit??

“If this competition produces a real and useful invention or innovation in learning, that will be great”

Given what we know about current academia, I can’t believe you actually believe there is any possibility of this.

As long as they disobey the way they’re told…