Can you guess which one received more coverage? 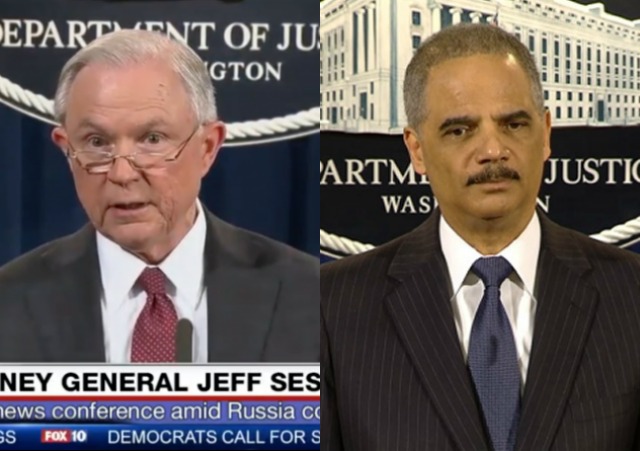 We spend a lot of our time correcting misreporting, slopping reporting, and reporting presented as objective when it clearly is not.

Increasingly, it’s apparent the attempt to oust newly-minted Attorney General Sessions was a good, old-fashioned media hit job. Who was behind it, we don’t know. These things seldom happen on their own, especially in the age of a completely incurious press.

The good folks over at the Media Research Center studied media coverage of the Sessions incident and compared it with the amount of coverage previous Attorney General Eric Holder received when he was in contempt of Congress. The results? Well, they’re pretty much exactly what you’d expect them to be, sadly. 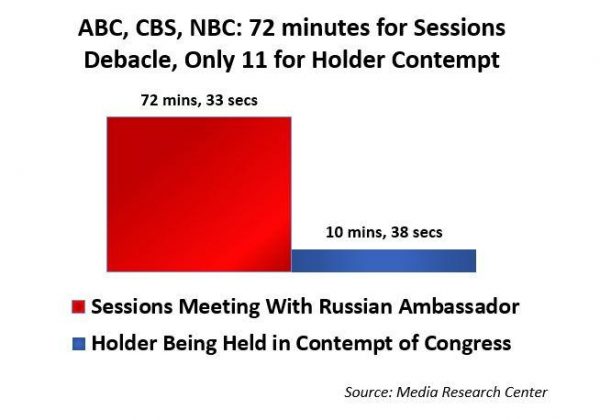 On March 2, Democrats accused Sessions of misleading Congress by not disclosing that he met with the Russian ambassador to the United States twice while he was serving as Senator. Despite admitting that the statements Sessions made to Congress “would not be considered false under the law” (Jan Crawford, CBS Evening News, March 2), ABC, CBS and NBC devoted more than 1 hour and 12 minutes to this topic, just on the morning and evening shows of March 2 and the morning shows of March 3.

CBS covered the Session controversy the most, with an overwhelming 28 minutes and 42 seconds. NBC followed with 25 minutes and 12 seconds, while ABC had 18 minutes and 39 seconds of coverage.

On Good Morning America on March 3, Chief White House Correspondent Jonathan Karl quipped, “Both the Russians and the White House has used the phrase “witch hunt” to describe this. And as for the ambassador, George, at some point you get to wondering who didn’t meet with the Russian ambassador on this campaign.”

On the NBC Nightly News March 2, Peter Alexander strongly implied that Sessions had committed perjury, “While the White House is defending Sessions, his testimony under oath remains under scrutiny with critics pointing to this 1999 interview where then Senator Sessions called perjury claims against President Bill Clinton serious allegations.”

Back on June 28, 2012, then-Attorney General Eric Holder became the first Cabinet member to be held in contempt of Congress for withholding documents from the House investigation into the Obama administration’s Fast and Furious scandal.

But that unprecedented move failed to rouse the interest of the broadcast networks. Anticipating the vote later that day, the three broadcast morning shows on June 28 offered a combined 91 seconds of coverage. That night, only NBC offered a full report (2 minutes, 8 seconds), while CBS and ABC limited themselves to brief anchor-read items (30 and 35 seconds, respectively).

The next morning, only NBC’s Today show offered a full report (2 minutes, 50 seconds) along with a pair of short items and a brief mention in an interview with then-Obama aide David Axelrod, while ABC and CBS again offered only short items.

Add it all up, and the unprecedented contempt charge against Obama’s Attorney General earned only 10 minutes, 38 seconds of network airtime, or only slightly more than one-seventh of that spent in the last day-and-a-half over Sessions’ meeting with the Ambassador.

Is it any wonder most folks bear a strong distrust of political media?

It seems more than a little disingenuous to fail to mention that the SCOTUS decision in NFIB v. Sebelius came out the same day as the contempt vote.

Just to give you an idea of why this matters, look at this blog. On June 28th, 2012, this blog posted 11 articles. 10, including the “word of the day”, dealt primarily with NFIB v. Sebelius. Just 1 dealt primarily with the contempt vote. Back then, the professor was also much more involved in actually writing articles. He wrote 9 of the articles, but not the one about the contempt vote.

Is this blog hypocritical for that coverage disparity?

Oh, let’s not waste our time for the next 4 to 8 years worrying about double standards and hypocrisy. That is kind of like years of showing water is wet and gravity makes my Doctor’s scale 20 lbs off.

“Is it any wonder most folks bear a strong distrust of political media?”

You have it backwards. The thing that amazes me is that there are still so many people who actually believe the garbage they get from mainstream “news” media.

Supposedly Trump is “Furious” with Sessions for recusing himself from any Russian investigation. I have no way of knowing if this true or not since I read it from the NYT. Trump is a fighter and Sessions is a lawyer who has been a prosecutor. He saw the correct path to take and took it. But look at what we are talking about. Sessions, perjury, lying, Russians, Trump’s campaign and the Russians. There is no evidence of any wrongdoing so far and no laws appear to have been broken. But what we have is an obvious smear campaign by both the Dems and the msm. They are in overdrive to destroy Trump. If we don’t do something as a nation we will not survive this kind of action by the protected class called the msm. Just read the article about Ms. Webber at the AP and her hit piece on Trump for the slain widow’s honoring at his speech. I cannot believe anyone could sink to that level of hatred.

C’mon repubs, all three branches are owned by you. Turn the heat around and enforce the contempt charge against holder for starters. Send the U.S. Marshalls or whoever enforces the charge to his office and perp walk him out. The media will forget about the russian nonsense quickly.
Get those Fast and Furious papers and other info out into the open. If it’s found to be destroyed, start a criminal investigation.
Go after hilldawg’s server and Benghazi next.

Is Eric Holder a corrupt scoundrel?

Is the Mushroom Media unfair and imbalanced in their coverage?

Now, are there things like the national debt and the fact that NOOOOOOOooooooobody is even mentioning it more significant than who covers what with how many minutes in the Mushroom Media?

If you read the damn transcript and still say that Sessions “lied,” then you are totally FUBAR. READ IT! Pay attention to the words.

Actually, Sessions did not lie under oath. Nor did he mislead Congress. As every lawyer in the world knows and counsels client, you never volunteer information. Always limit your answer to the SPECIFIC question asked, without embellishment. If your questioner does not ask the proper question, that is his lookout, not yours.

In the case of Sessions’ answer to the specific question asked, it was complete and clear, And, as we have seen, the counter claims of the opposing politicians have been shown to be, at least, misleading and, in some cases, totally inaccurate.

READ what I wrote, stupid.

As a lawyer, you should write clearly. Of course you said Sessions is innocent, but one must read carefully to get it.

How carefully must one read to see the word “innocent” and not confuse it with “guilty”? What is even slightly ambiguous about Rags’s comment?

Perhaps you should take your own advice and engage in a knee-jerk reaction.

I was not disagreeing with anything that you said. I was expanding on your remarks. The argument being made by Sessions’ detractors is that he failed to volunteer information concerning meetings not covered in the question to which he was responding and this constitutes lying to Congress. My post simply pointed out why such omission did not constitute lying to Congress.

Now, you asked why who covers what and for how long is in any way important. The answer is because it indicates exactly how much faith one can put in the accuracy and neutrality of the press. In this administration, it is becoming patently obvious that the MSM has NO credibility in those areas. If you are going to take a person’s word for something, then you have to have an accurate gauge of their reliability as a source. We can now state, with near certainty, that nothing which the MSM dispenses can be taken as truth until it is independently verified.

Correction: “Perhaps you should take your own advise and NOT engage in a knee-jerk reaction.” – Mac

We spend a lot of our time correcting misreporting, slopping reporting, and reporting presented as objective when it clearly is not.

It is still beyond belief to me how many believe the media, no matter what they say – regardless of how outrageous and unsubstantiated the LIES are!!

Holder and Obama – along with Valerie Jarrett and MANY others from the last administration, especially HILLARY – belong in JAIL. Not holding my breath that the media will report the truth when it’s clear they were WRONG, or that Holder et. al. will be charged, tried, or convicted.

Speaking of which, what’s the statute of limitations on contempt of congress? If it hasn’t run yet, will the new US attorney for DC prosecute Holder and Lerner? If not, why not?

Let’s see, one A G sells guns to the mexican cartels and is under a charge of contempt of congress, and a Senator has a conversation with an Ambassador from a foreign nation, before he became A G.
And the question is Which one is the criminal ???