Someone’s not lovin it… 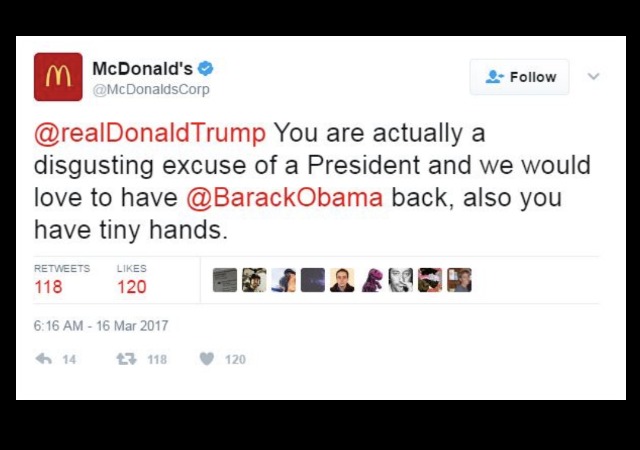 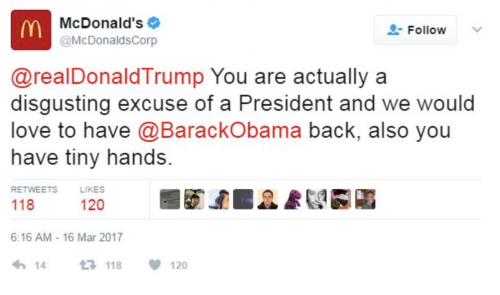 Now McDonald’s will start an investigation:

Trump loves his McDonald’s, too. He ate McDonald’s on his private jet to celebrate his GOP presidential nomination last summer.

He even appeared in a McDonald’s commercial in 2002.

Maybe they could start their investigation in the office of the Fascist-Progressive political operative they hired as their brand communications director.

“Compromised” by one of their high-paid SJW executives, no doubt.

I would boycott them, but I haven’t eaten there in years. Nasty stuff.

Chances are, they have an intern or something to handle the tweets. That’s the first place I’d look.

At minimum wage, I hope.

Thankfully, my town has a Bojangles right across the street from McDonald’s.

I would have expected a full blown apology by now from McDonald’s to the public and President. This is liberal land though, and they are trying to figure out if they apologize if it will hurt their sales from non Trump supporters.

News at nine. We see Ronald McDonald in cuffs being led to a squad car for violating the CFAA.

It has to be a hack. They are just trying to get their story straight. They know that Republicans buy burgers too.

The old my account was hacked lie/excuse. That was a favorite of Anthony Weiner as I recall.

The fact that they did not simultaneously issue an apology and disavow the contents of the tweet says everything one needs to know about McDonalds.

Won’t ever buy their products again.

I believe them. I don’t eat there, either,but they make a lot of money from those who do, and good for them!

MacDonald’s can take their garbage I truly would not feed a dog and their black/365 posture and go eff themselves.

Def. a legit hack…it’s not like Trump wants to raise the min. wage to $15 an hour. He wants to scale back regulations.

In suspect a roque employee…who needs to be fired.

I have a republican friend who owns a McDonald’s franchise. He’s not very happy right now.